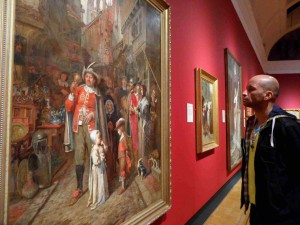 The painting on the left of this photo is Henry Hetherington Emmerson’s picture of ‘The Lost Child’, which shows Victorian Castle Garth in Newcastle – disguised as a scene from the past. It is hung next to a picture by Ralph Hedley, which depicts the Black Gate, with a glimpse of Castle Garth in the background. (Hedley’s picture, which records life in Victorian Newcastle, is the subject of another blog.) The paintings are on show in the collection exhibition ‘19th-century Art in Newcastle’, until 29 April 2012 at the Laing Art Gallery. 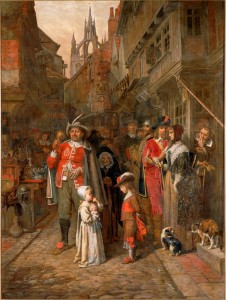 In fact, the buildings in Emmerson’s picture are almost the same as in Victorian photographs of the street. The main change Emmerson made is to the building on the right, to make it seem grander.

The grey, smoky air in Emmerson’s picture is probably quite true-to-life for Victorian Newcastle.

This 1894 photograph is in Newcastle City Library collection. 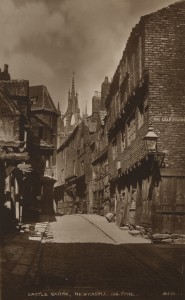 In an article on ‘North-Country Lore And Legend’, in the ‘Monthly Chronicle’ for September 1889, J. R. Boyle wrote:

The crowded dwellings of the Castle Garth have almost all disappeared. When the present Moot Hall was built, many of the houses surrounding the Keep were taken down, and even a larger number were removed to make way for the approach to the High Level Bridge. Now all that remains to show the old-time aspect of the Garth is the short street leading within the Black Gate towards the Moot Hall…. This, indeed, is all that is now generally known as the Castle Garth. It is hastening, also, towards its end. The hand of time and decay rests heavily on it, and before very long even this remnant of Old Newcastle will be gone.

A later photograph, from about 1900, shows that the buildings next to the Black Gate had indeed been knocked down. However, it’s still possible to see the street outline.

Emmerson has shown several of the figures in the picture of ‘The Lost Child’ wearing the kind of flamboyant clothes favoured by many wealthy people in the 17th century, particularly Royalists. Newcastle had benefited enormously from Royal Charter for control of the coal trade. It was a Royalist town during the Civil War (1642-1649) until it fell to Scottish forces working with Parliamentarians in 1644. After the monarchy was restored in 1660 with the accession of Charles II, Royalist control of Newcastle returned.

In his painting, Emmerson created a sweet and humorous image of 17th-century life by focusing on the lost girl and the young boy with his little dog. 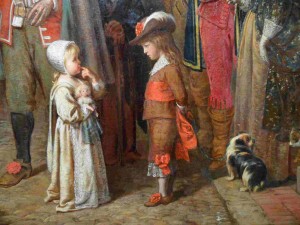 The boy’s little dog gazes nervously at the cat behind it. 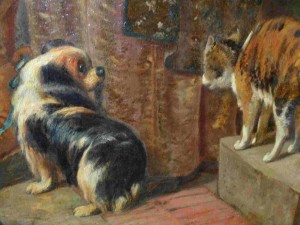 Both cat and dog seem as alarmed as each other

Not everyone in the picture is richly dressed. 17th-century Puritans believed that expensive, decorative clothing was sinful – a Puritan man in plain black clothes and tall hat is one of the people in the crowd around the town official. In any case, the majority of people could only afford simple clothing.

The barber on the right is also dressed plainly. His shop is marked by the barber’s traditional red-and-white pole, together with a shaving plate with an oval cut out for the customer’s neck. The barber also has a comb in his hair – though the huge scissors he’s holding look dangerous for hair-cutting. 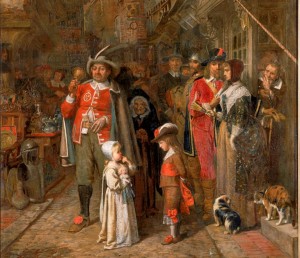 Emmerson has painted a variety of ages and types of people

However, Emmerson was aiming at creating an impression of life long ago, rather than being absolutely accurate in all details. Nevertheless, if you discount the fanciful addition of the fine house on the right, the picture’s setting gives an interesting impression of this ancient Newcastle street in the late-19th century.