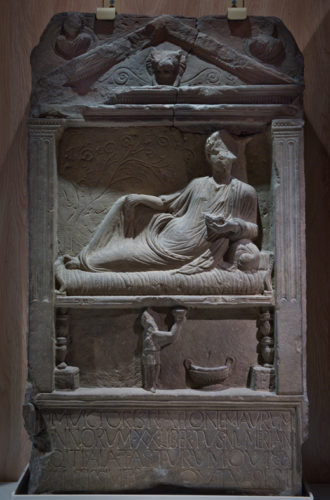 This is the tombstone of Victor the Moor from north Africa, a freed slave. The hugely expensive tombstone was set up by his ex-master, a cavalry soldier called Numerianus. It is made from a finer sandstone than is typical of the locally available stone, and the mason was able to include much fine detail. The stone-mason himself almost certainly came from Palmyra in Syria. While the shape of the tombstone and the form of the inscription is typical of Romano-British examples the details of the sculpture show many Palmyrene influences.

The two busts, with deliberately smashed faces, have a circular frame based on a Greek shield (clipeus). Such ‘shield images’ were originally portraits of ancestors that were hung on the wall. In Palmyra full-sized examples were occasionally used for portraits of the deceased on sarcophagi, but smaller metal versions showing male busts were also sometimes worn as a medallion on the hats of priests. The figures, simply wearing tunic and mantle (as here), hold no attributes to identify them as a particular deity,  but as the medallions were worn by priests they presumably held some religious significance. If the images are of gods they may have a protective role here. 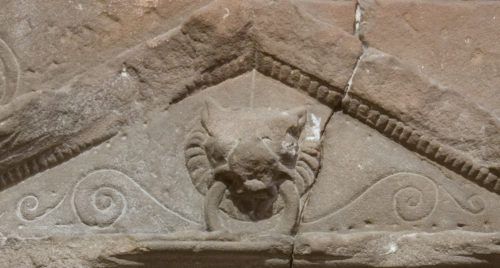 The lion could be used in funerary contexts either as a symbolic guardian of the tomb or as a reminder of the power of death, but here takes the form of a lion’s head holding a loop. This was widely used as a design for a door-knocker or handle. Its unusual use as straightforward decoration is also known on a number of Palmyrene tombstones. 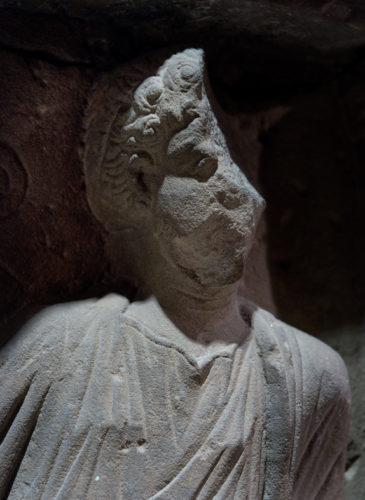 Like many Roman tombstones the face has been deliberately targeted and badly damaged. It would not have been an accurate portrait of Victor himself as the stone-mason is unlikely to have ever seen him in life. A few of his ‘snail-shell’ curls, commonly used on Palmyrene sculpture, survive. 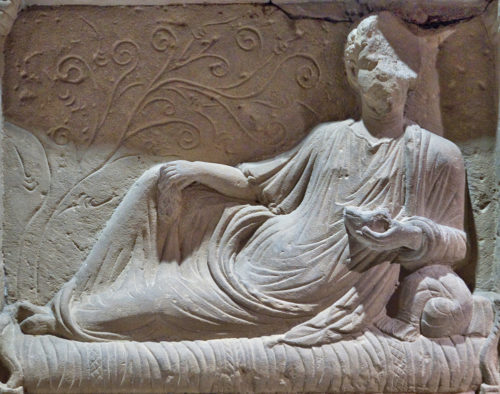 This pose is very typical for Palmyrene tombstones showing men reclining on couches; they hold a drinking cup in one hand and in the other a garland, piece of fruit or, as here, a small branch of olive or laurel leaves. The exact meaning of the branch is unclear, but is thought to be protection against evil and bad luck. Victor is shown wearing typical mainstream Roman dining-clothes, consisting of a comfortable unbelted tunic and a rectangular mantle, although details such as the numerous folds in the cloth, the scalloped edge and carefully depicted tassel of the mantle are very Palmyrene in style. 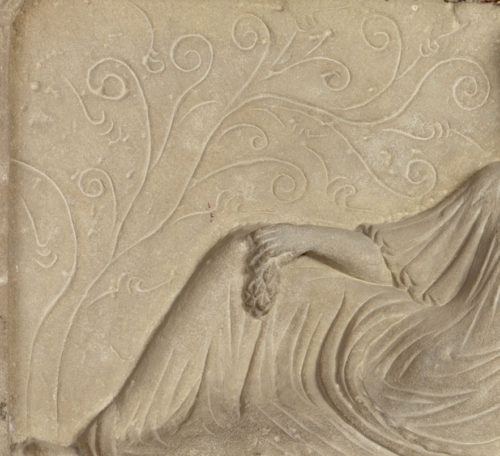 On Palmyrene tombstones the space behind the reclining figure was usually taken up with smaller figures of the man’s family. Here the stone-mason has filled the space with a stylized plant which, despite having no leaves or fruit, is likely to be a grape vine as similar spiral and curled tendrils are used elsewhere in Roman art on definite vine scrolls. This imagery is very similar to scenes on some of the small fired-clay tokens that were used as entrance tickets to religious feasts in Palmyra. These often show a priest reclining in exactly the same pose as Victor, with a vine above the end of the couch. 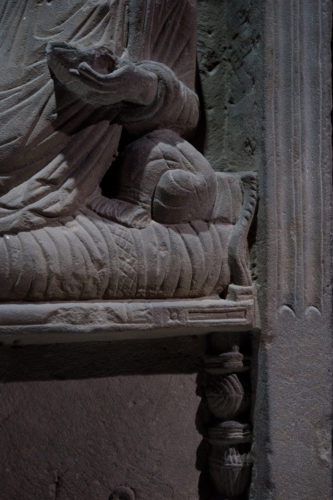 Like Victor’s clothing, the pillow and decorated mattress cover are shown with large numbers of folds in the Palmyrene style. The wooden couch has ornamented legs and carved, inlaid or appliqué decoration along the edge. The couch is what is called a ’bed with boards’, having curved wooden walls on three sides to help protect the person on it from damp walls and cold draughts. These boards should be at least shoulder height, but the stone-mason has either not wanted them to get in the way or has tried to make the couch closer in style to those shown on tombstones back in Palmyra, and so has reduced them in size to a slightly S-shaped curved element no taller than the pillow.

Below the couch is a slave, shown at the different scale so that he does not get in the way of the main figure. He is holding up a cup of wine he has just filled from the large bowl beside him. This theme of a slave offering wine first appeared on Greek tombstones and was then adopted by the Romans, creating as it did a pleasing image of status, pleasure and luxury. The bowl was used to mix wine with water (often hot) and perhaps also some herb flavourings, which was carried out in front of the guests at dinner parties.

Victor came from ‘the nation of the Moors’, who lived in what is now Morocco and west Algeria. They were famous for their very fast and light cavalry, and it is possible Victor was bought by the cavalry soldier Numerianus to be a groom. He would have helped Numerianus look after his horse and military equipment, as well as carried out domestic duties in the barracks.

Victor was 20 years old (‘annorum XX’) when he died. Another tombstone from South Shields records a woman who died when she was 30. Ages on many Roman tombstones are often multiples of ten, probably because the exact age of the person (especially ex-slaves) was unknown and an approximate age was given instead.

2 Responses to The Victor Tombstone