Health and safety at work 100 years ago

While I was recently cataloguing the personnel records in the Vickers Armstrong collection I came across a large quantity of accident records. These give a fascinating insight into working conditions at the factories and shipyards operated by the firm in Newcastle upon Tyne. 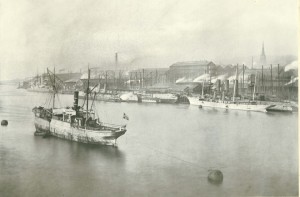 The collection includes a series of nine accident report books for the Elswick Shipyard covering the years 1898-1916. These include the names, trades, ages and addresses of all the men injured in the shipyard together with details of their accidents. There are numerous examples of back injuries suffered during heavy lifting together with minor injuries such as bruises and lacerations caused by falls and accidental contact with equipment and machinery. With so many lathes, saws and presses in operation accidents were inevitable.

Not all accidents took place during work time. I came across one example of a serious accident resulting from ‘boys being boys’.  The worker concerned was an apprentice in the shipyard, John Cribbins, who lived in Byker.

As the entry shows, on 7 September 1915 Cribbins lost a finger while ‘Amusing himself’ with companions during his dinner hour (TWAM ref. DS.VA/2/63/9). The accident report book records the nature and circumstances of the injuries:

“1st finger right hand amputated & thumb & second finger severely lascerated by bogie wheel passing over it. Talking to companions who were amusing themselves in dinner hour with Yard Bogie, on railway down east side of 858 ship’s berth”.

To further rub salt into the wound he didn’t receive any compensation for his injury. Sadly he was just one of hundreds of men and women who lost fingers, eyes and sometimes even their lives in the shipyards and workshops at Elswick and Walker.  Fatalities were not uncommon as the registers of accidents at the Low Walker shipyard testify.  The entry below documents a fatal injury to Edward Gray, a 43 year old painter’s labourer, on 13 July 1908 (TWAM ref. DS.VA/2/58/1).

Tragically, falls such as this from the stages besides vessels were the cause of numerous shipyard deaths.

With so many injuries to employees Armstrong Whitworth were inevitably facing compensation claims from a large number of workers. The Vickers Armstrong collection includes files relating to a significant number of these cases from the late Nineteenth and early Twentieth Centuries. While the majority of these relate to men, some do also relate to women. This is particularly the case during the First World War, when large numbers of women went to work in the factories.

An example is the case file relating to Florence Dodds, from Chester le Street, who worked for the firm as a machinist at the Elswick Works (TWAM ref DS.VA/2/76/14). She was 22 years of age at the time of her accident in October 1916, when she suffered two broken fingers on her right hand and the amputation of the top of her middle finger. 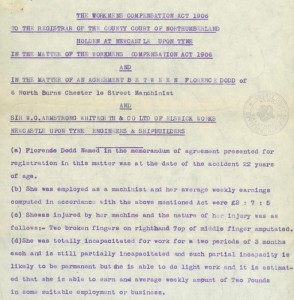 Three years later in 1919 Florence Dodds accepted a lump sum settlement of £40.00 for her injuries.

These accident records are a reminder of just how far we have come in terms of improvements to workplace health and safety. As well as being of interest to social historians they may well also be of interest to family historians whose ancestors worked in the Armstrong Whitworth shipyards and factories at Elswick, Scotswood and Walker. Why not visit the Archives to find out more – our location and opening times can be found on our website.

15 Responses to Health and safety at work 100 years ago