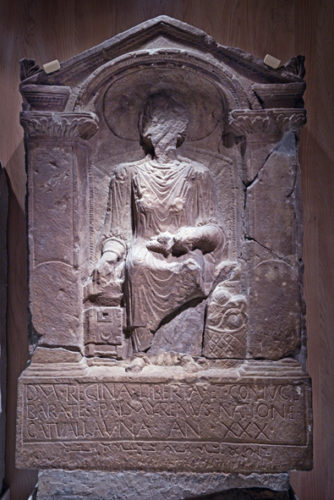 This is the tombstone of Regina from the tribe of the Catuvellauni, freedwoman and wife of Barates from Palmyra. She came from southern England and he came from Syria and they ended up at South Shields. It is an expensive tombstone with a full-length portrait of Regina, whose face has unfortunately been chipped away. The sculptor probably came from Syria and he combines both Palmyrene and Romano-British elements in the tombstone. 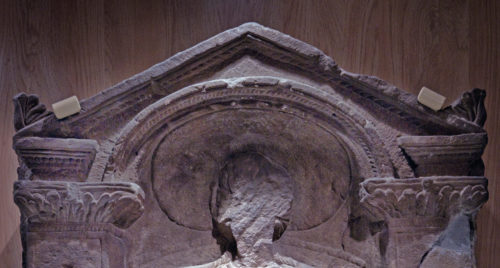 Regina is shown within a niche decorated with architectural details. The use of a niche topped with a semi-circular shell is common on Romano-British tombstones but unknown at Palmyra. Here, however, the oval shape behind Regina’s head does not fill the top of the niche and is not carved with the ribs of a shell. This looks more like a nimbus, the cloud of light used to indicate gods and people of power. Here it perhaps indicates that as Regina was dead she was no longer human but part of the supernatural world. 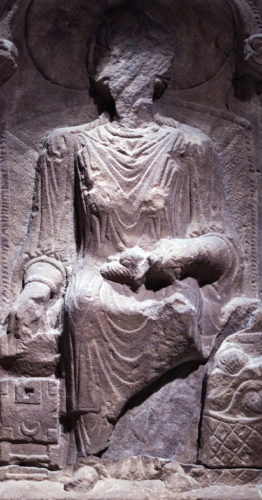 Regina is wearing an underbodice and ground-length skirt with a shorter unbelted tunic over the top. This is not a Mediterranean Roman costume, but a provincial form of dress, and shows that not even rich women always adopted mainstream Roman fashions. The tombstone dates to the second half of the second century when wearing clothes held together by brooches was going out of fashion and new styles – such as this – were coming in. Regina also wears two bulky bracelets and a chain round her neck. They are all decorated with a herringbone design, which can be paralleled on Palmyrene tombstones, and does not necessarily reflect the designs of jewellery Regina herself wore. 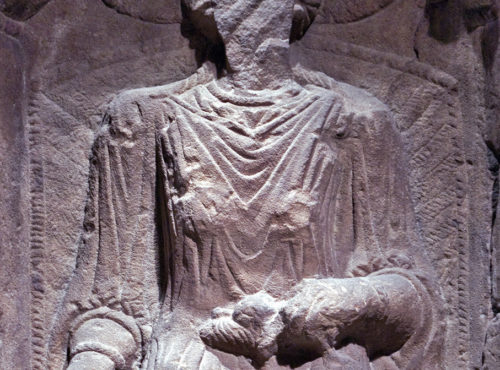 Regina is sitting in a high-backed wicker chair. This is a common item of Roman furniture, mainly associated with women; men were expected to prefer less comfortable seats such as stools and benches. The back of this type of chair usually curved round to the front, which is represented here by the curved line at the top. The weave of the wicker is typically represented in vertical lines and not radiating out from the centre as here, which may be a Palmyrene convention. 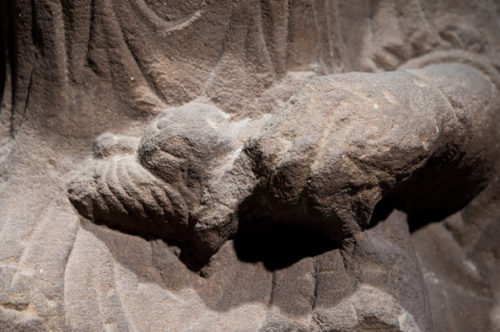 In her lap she holds the equipment needed for spinning thread. The distaff is the rod at the back with a round mass of unspun wool tied onto it, and the spindle is the more oval shape underneath it, with wavy lines depicting the spun thread wrapped round it. In the Roman world spinning was carried out almost exclusively by women, and the distaff and spindle were therefore a symbol of womanly virtue and domestic skills. They are included on the tombstone to show she was a good woman and dutiful wife. 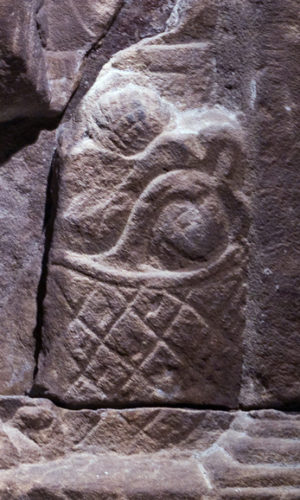 The basket beside her chair contains balls of wool. It is possible that in real life as soon as Regina became the mistress of the house she stopped spinning thread herself and left it to her own slave or slaves to do. The slaves were given a certain weight of wool to be spun in a day and had to finish it all, however long it took them. 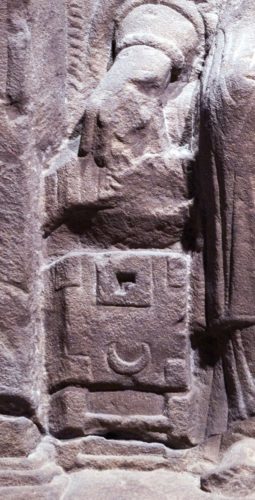 Regina uses one hand to lift the lid of a box. It has brass plates on the corners and a decorative crescent on the front and is raised on legs. It also has a prominent lock to indicate it was used to hold valuables such as jewellery and money. As with the size of the tombstone itself, Barates is here advertising his wealth.

Barates came from Palmyra, in modern Syria. This was a large imposing city, very far removed from a minor military fort with small associated civilian settlement such as South Shields. Even Regina, from the more Romanized south, would have found life different here. The name ‘Palmyra’ was originally Greek which is why it contains a letter Y, not generally used in the Latin alphabet.

This is part of the word ‘Catvallavna’ on the bottom line of the Roman inscription. The sculptor made a mistake here and originally wrote an ‘O’ which he removed and replaced with the letters ‘TV’. This is a surprising correction, as spelling was quite fluid in the Roman period. Latin was possibly a third language for the sculptor, who probably also spoke Palmyrene and Greek.

This is a line of Palmyrene Aramaic. It is carved more confidently than the Latin, and suggests the stone-mason was also Syrian. It translates as ‘Regina, freedwoman of Barate, alas!’ (note the different spelling of his name). Although this seems more personal than the factual Latin text, this is a common formula on tombstones in Palmyra. In the Palmyrene inscription Regina is simply called ‘freedwoman’ rather than ‘wife’.