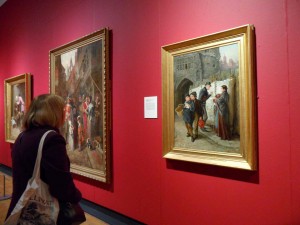 The picture on the right of this photo is Ralph Hedley’s painting of ‘The Ballad Seller’, which shows the Black Gate in 1884, with a glimpse of Castle Garth in the background. It is hung next to a picture by Henry Hetherington Emmerson, which shows Victorian Castle Garth dressed up as a scene from the past. (Emmerson’s picture is the subject of another blog.) The paintings are on show in the collection exhibition ‘19th-century Art in Newcastle’,  until 29 April 2012 at the Laing Art Gallery.

The red roofs of Castle Garth can be seen behind the Black Gate in Ralph Hedley’s view. The Black Gate was the entrance to the street, which had been built inside the castle walls. Only a short stretch of street was left standing by the time Hedley painted this picture. It has now all been demolished, though the outline of the street can still be seen. 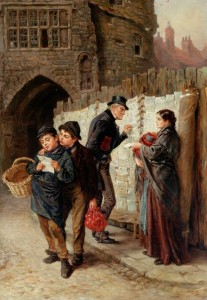 Hedley would very likely have made sketches on the spot for the background scene. He shows the fence that had been put up around the Black Gate in 1883 by the Newcastle Society of Antiquaries. This was to enable them to undertake renovation work after they leased the building from Newcastle Corporation. Hedley’s picture shows broken and missing stones as well as damaged window glass.

The Black Gate is extremely ancient. It was built between 1247 and 1250 as an addition to the fortifications of the Norman castle. However, it had subsequently become very run down. It had used as a lodgings house in the 19th century, with many people crammed into the rooms.

Hedley took great care to accurately record details of North-East trades in his paintings. In this view, the detail of the canvas backing for the song-sheets, which could be rolled up and taken away, would have been true to life. Hedley would also have seen poor women street sellers having to take their children with them, like the baby in the ballad-seller’s arms in this picture. 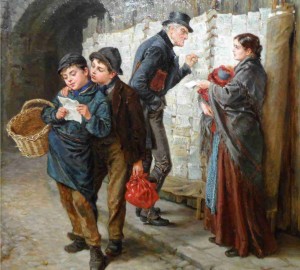 The boy in a blue smock and carrying a basket seems to be a delivery lad. Children often started work early – compulsory education was only introduced in 1870, and children could leave school at 10. This was raised to 11 in 1893. There were so many children of poorer families working in the streets that a Newcastle Street Vendors’ Association was set up in 1882, and it held a charity ‘breakfast’ attended by 30 girls and over 200 boys.

At this stage in Hedley’s career, he would have posed the figures in his studio, rather than sketched them on the spot. Sketching in the street was difficult, and a model was more convenient to use for getting the right pose and for painting details. However, Hedley tended to employ ordinary local people rather than professional models. In fact, the young boy in a brown jacket was a lad called John Irwin, who was the brother of one of the apprentices in the Hedley family woodcarving business in Newcastle. This boy also modelled for Hedley’s picture of ‘Last in the Market’, which is on show in the ‘Northern Spirit’ display on the ground floor at the Laing Art Gallery. 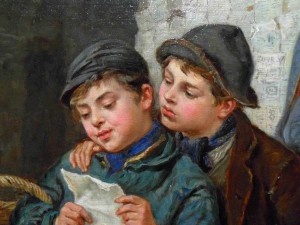 Hedley’s picture mixes humour, pathos and sentiment. The woman is young and attractive, but her torn dress shows how poor she is. She is contrasted with the old man, who is grumpy despite his expensive clothes. The young boys are working lads, but seem as if they are enjoying life. 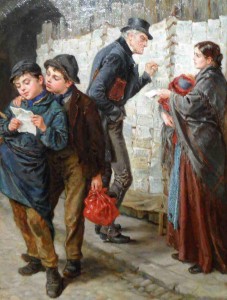 However, Hedley did take one liberty with the facts when he painted the elderly man, who seems less realistic than the other figures. The man’s black tailcoat and lighter-coloured breeches were extremely outdated as daywear for gentlemen. It seems that Hedley may have relied on a print portrait of the North-East wood-engraver Thomas Bewick (1753-1828) which showed him in about 1816. A late version of this print appeared in a book entitled ‘Thomas Bewick and his Apprentices’ by Austin Dobson, which was published in 1884, the year Hedley painted his picture. This version of the print of Bewick accidentally made him look rather bad-tempered, like the elderly man in Hedley’s picture. Gaiters, which Hedley’s elderly man wears on his lower legs, were still sometimes worn by country workers in the 1880s (as well as clergymen and horse-riders), and Hedley may have been trying to suggest that the elderly man was from the country, and out of touch with town styles.

Further information about Hedley can be found on the touchscreen details for Hedley in the Northern Spirit display at the Laing Art Gallery. Also see John Millard’s ‘Ralph Hedley, ‘Tyneside Painter’, Tyne and Wear Museums, 1990, (out of print, copy available in the Local Studies section of the City Library, New Bridge Street).