VE Day 75 – Use of Personal Narratives

This week I should have been opening our temporary exhibition, ‘The Final Push’, charting the final six weeks of World War II for two of our regiments; the 13th/18th and the 15th/19th Hussars. The opening was to coincide with the 75th anniversary of VE Day.

When putting together any exhibition I am always very conscious that it needs to follow one of the key aims of Charge!; that whilst we told the story of the regiments as a whole it’s very much the individuals whose voices should be heard. We are fortunate to have, within our archives, many diaries, letters and memoirs, both personal and official, and it’s the personal ones that often make the most interesting reading. By quoting these individuals it often creates a more vivid picture than any I can create with my text.  Here a soldier reflects on the crossing of the Rhine on the 25 – 26 March 1945, a key moment in the final phase of the war for both regiments: 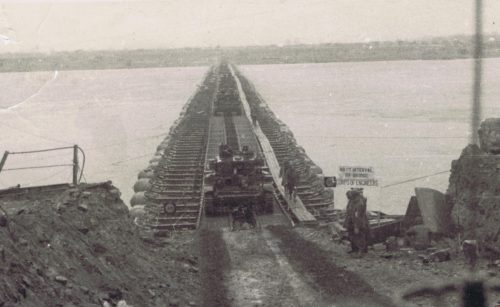 ‘The day we prepared to move up for the crossing, we discovered that many of the Germans were still sure that they would win the war.  A group of prisoners were working on a damaged railway with a German officer in charge…He said that we would be annihilated as soon as we crossed the river and we would be pushed back into the sea.’

The benefit of hindsight tells us the German officer was wrong. Here, another soldier sums up the constant state of uncertainty and alertness the soldiers found themselves in so close to the end of the war in Europe:

‘We moved on each day, was it going to be our last day in battle, but we still had to carry on, we came back to a part of Holland again at Hengelo then back across the border again into Germany to Nordhorn, Lingen, Cloppenburg, Delmenhorst and Bremen, we stayed in houses with the German civilians we slept on the floor of their living rooms with one eye open we were not taking any chances at this stage’.

One of our regiments, the 15th/19th Hussars, was to come across unimaginable horror when it stopped at the gates of Belsen concentration camp:

‘When we got there, there were literally hundreds of bodies in all sorts of clobber, some without any and there’s these folk pressed up against the barbed wire…they were skeletons, the skin on them…these folk were starving…their hollow cheeks, hands as thin as can be…’ 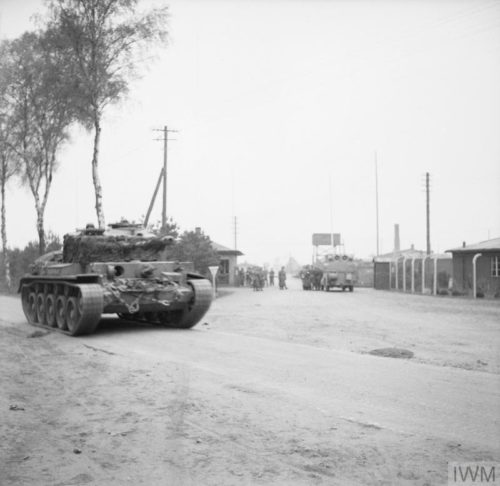 Ian Forsyth very kindly agreed to be interviewed earlier this year for our exhibition and the interview is at times horrifying, fascinating and very humbling.

One of the things that struck me when I was researching this exhibition was the contrast between the euphoric newspaper headlines and the memories of those men who served. And so, I shall end this article with the following two quotes:

‘On the evening of the 7th May 1945…Major Courage came round looking pleased, we knew it was good news, tomorrow the 8th May 1945 would see the signing of unconditional surrender by the German senior generals. This was to be known as V.E day there was some cheering at first. We the men who had done our duty throughout did not cheer but we thought about our pals who would never enjoy this moment with us, so many of them.’

‘Having got over the excitement, and suffering from the night before feeling…I suddenly realised how silent everywhere was, all guns now standing idly by, no longer required it all seemed so unreal, when suddenly I was brought back to my senses, the silence was broken by a tiny bird singing, I realised then that I had not heard such a sound since I left England, and that tiny bird in song told me more than words that this terrible war was now truly over.’ 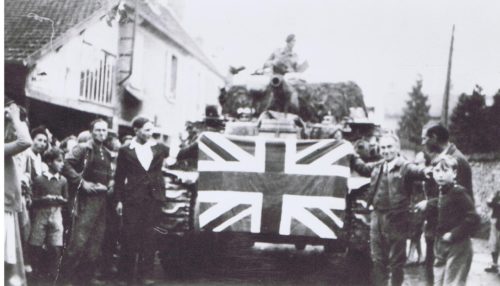 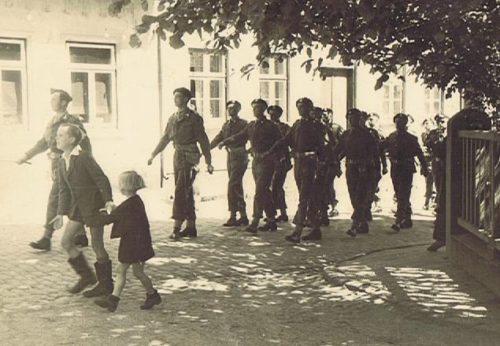