This blog concludes the top ten bags list, here are the final five.

The first is one of the smallest bags that we came across and dates to around 1900. It is made of a very fine silver chain and has a fabric lining. It also features a simple twist clasp. 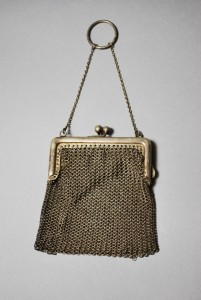 The next bag is also made from silver but has a solid body which has been engraved. This particular bag belonged to the wife of a coroner in Sunderland in 1890-1892. 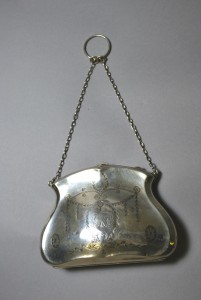 Both of these bags have an interesting feature, a circular hoop at the top of the chain. At first we thought were that they were delicately carried by placing one’s finger in the hoop. However after some research we found out that they would have been carried on a hook attached to a belt, known as a Chatelaine. These were often worn by women who were in charge of the household attaching things like keys and purses to them. They became very fashionable and highly decorated, it was symbolic of the power a woman had as head of the house. 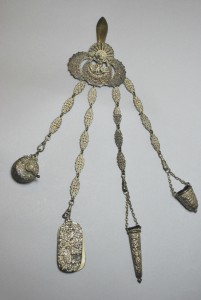 In the collection here at Discovery there is only one example of a Chatelaine which is decorated with an owl motif. At the bottom of each chain is a hook to attach objects to, in many ways the Chatelaine is an alternative to the bag.

In the eighteenth century one of the most popular things for a young man to do was to embark on a tour of Europe, known as the ‘Grand Tour’. They would travel visiting many ancient sites from the classical world, and was seen as a way for a respectable gentleman to complete his education. With all this travelling the elite required a way to carry their belongings. In this period travel cases became immensely popular, and owning one was a way to show others that you are a well-traveled individual. Many of the earlier travel cases were very ornate with the exterior being just as important as the interior. 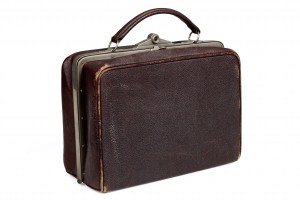 Into the Victorian era the excessive nature of these boxes was viewed negatively and they began to be known as vanity cases. Men’s cases become less decorated and more practical, this bag is an example of this. It dates to around c1900 and its exterior is a plain brown leather, inside it features items like a snuffbox, toothbrush tweezers and other grooming utensils. 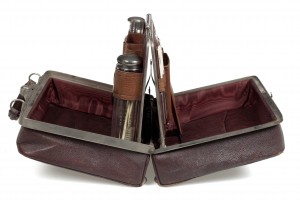 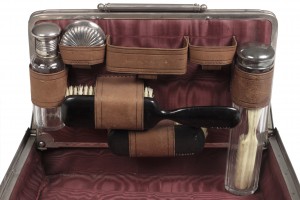 The next case dates to 1870-1899 and is woman’s travel case, it is much more decorative than its male counterpart , as well as being much smaller. This particular case has a set of tweezers and a manicure tool inside, as well as a small mirror on the inside lid, and it would barely fit much else in! Its red plush velvet exterior, quilted interior and gilded fittings scream luxury. It certainly seems that this has been designed for form rather than function. 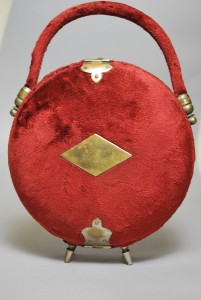 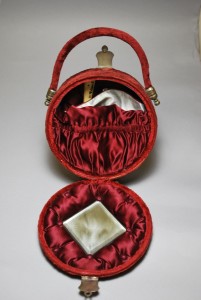 The final bag of this blog is one of my personal favourites due to its hidden secret. It appears a relatively simple bag. It is made from raw black silk and has a faux-ivory frame, dating to the nineteenth century. The lid is beautifully decorated with ornate carving, parts of which have been coloured greens and reds. 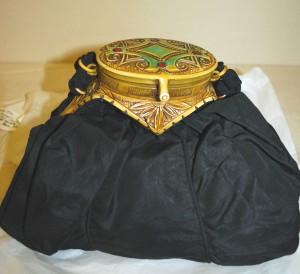 Its unusual feature is what is concealed within the lid. In the lid is a hidden compartment with a mirror and two pots of cosmetic powder. This is not the only item in the collection to features hidden pot of make-up, Emma Davidson’s post on fans also includes a fan made by Rimmel. 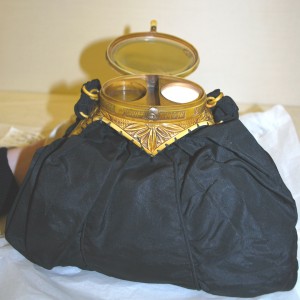 If you want to take a look at all the bags in the collection try the online search and see what you can discover. The Discovery also run tours of the costume store, so keep a look for these here.