For the past eight weeks Chiao-Mei Lin and I, who are both masters students at Newcastle University, have been working on a number of projects in the costume and textiles store at Discovery. For this project Mei and I have been photographing and updating the digital records for the bags in the collection.

In the collection here there are 380 bags and purses, which are all carefully wrapped up in tissue and packed in boxes. There is such a variety of bags in the collection, and unwrapping each was an unique experience.

One thing that I find most fascinating about bags is that, unlike hats, parasols and fans, they never stop being used or being in fashion.

As we got further into the project we could clearly see how the bag has evolved and changed over time.

Here are our top ten bags.

For our first bag we have chosen one of the oldest in the collection. This bag is a slight mystery as there was very little information on record about it. The bag has a Persian influence and dates to 1700-1799. For such a small, simply structured bag it has so much exquisite detail. It is beautifully decorated with coloured thread and has some Persian text on the front. We just loved the small tassels that hang off the bottom half of the bag. This style of bag is flat and has a short handle, and was likely worn (likely on a belt) to keep the bag as close to the owner as possible to avoid any theft. 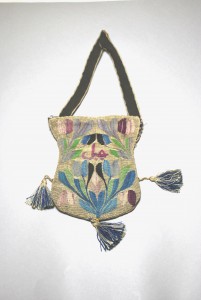 The use of bags predominantly started off with men, using bags to carry small valuable items, and were often made from leather. For a long time bags were worn on a belt rather than being carried on a shoulder or by hand. By the 17th century many men carried larger bags to transport letters whereas women carried small decorative pouches filled with scented flowers such as lavender to mask both their own personal hygiene and that of those around them!

While going through the collection we found some bags that we at first mistook for peg bags, after doing some research we began to understand their function. In the eighteenth century women’s dresses became very large, consisting of many layers of skirts.  As these skirts rarely had pockets sewn into them, they start to wear bags tied around their waist under the layers of skirt. These bags essentially functioned as a pocket. Women could keep valuables hidden under several layers of skirts, petticoats and underskirts. 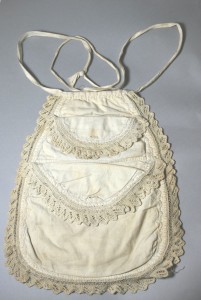 This example has some decorative trim and multiple sections.  The trend for this style of bag slows down by 1860s. This is because it became more fashionable for skirts to be slimmer and not as full, and the pockets would have ruined the silhouette of the dress. After this period much more ornate bags become popular and this is when bags really take off as major accessory.

One type of purse that we came across many times was the ‘miser’ purse, so called because it was very difficult to get any coins out. This type of purse reached its peak popularity in the Victorian era. There are a large number of these oddly shaped purses in the collection, most of which are decorated with beading. Typically one side of the ‘miser’ purse is much rounder than the other which tends to be squarer, this is so different coins can be stored in either side.

This ‘miser’ purse in the collection it is so beautifully decorated, with floral patterns on either end. 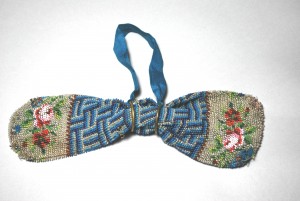 The majority of the bags in the collection were for women,we only found one or two that were for men. This bag is a black satin Asian purse that has some embroidered decoration on either side, it has been dated to 1840-1860. The way that this purse functions is by folding it over a belt. 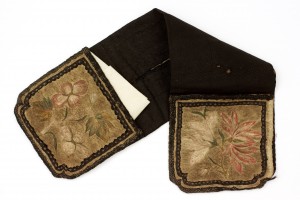 For many of the bags there is little information of how people came to own them or what that person was like, so it is always exciting to find an object that has a story to tell. This particular belt has a hand-written letter in which the owner describes how he came to possess it. 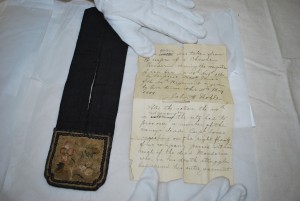 ‘This wallet was taken from the corpse of a Chinese mandarin during the occupation of [?] 24/25th Aug 1860 by Corporal [?] Jones of the 44th Regiment & given by him to me this 31st May 1899. [signed] John M Noble
After the action the 44th in advancing on the city had to pass over a number of the enemy’s dead. Corporal Jones marching on the right flank of his company passed within reach of  the dead mandarin who, in his death struggle had opened his outer garment & gripped his belt exposing his wallet, on the spur of the moment Jones pulled it from under the belt while passing, it contained opium & a few things of value.’

One of the most popular style of bags by far in the collection is the frame bag. These have a hard frame made from various materials including tortoise shell and enamel, with a soft fabric body. These became a popular choice because they could be made at home. Some of these feature beautiful embroidery and beading. Women’s education in the past had a large emphasis on needlework, the collection here has many examples of such work. These bags were often used as a means to display a woman’s talents for needlework and show off their wifely skills. 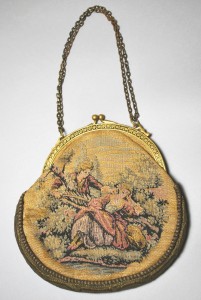 We have chosen the above bag because it has some lovely embroidery in a tapestry style and a metal frame. It dates to 1870-1890 and is from France. The image is a typical outdoor scene with the figures lounging casually in the centre.

In the second part to this blog we shall conclude the top ten which includes some marvelous metalwork and a bag with a hidden secret.