We all need something frivolous in our lives now and again, and this month I’ve been working with some of the most frivolous things in Tyne & Wear Archives and Museums’ Costume & Textile Collection – the parasols.

All the parasols are kept hanging in cupboards like some weird white bats, wrapped in Tyvek, just waiting to reveal their mysteries. 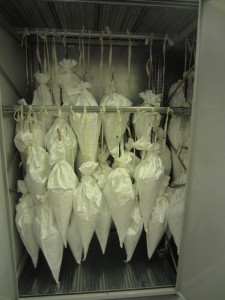 A system for safe storage of parasols was developed by Sharon Robinson during preparation for the store move from the old store at the Laing Art Gallery to Discovery Museum in 2004. In a real labour of love, her mum, Beryl made loads of bags. Now Collection Care Manager at the Museum of London, Sharon has implemented the same style of storage there.  [1]

There are over 90 parasols spanning 150 years or so – from the plain and simple to the frankly frivolous!

Parasols protect people from the sun, and have a long history dating back to ancient Egypt to around 1200 BCE. They were an indication of rank in many cultures –carried over Egyptian, Greek and Hindu gods, over Emperors from China, Burma and Siam, and over Doges and Popes in the Catholic Church.

They first became a fashion item associated with women in ancient Greece and Rome. However, their history then becomes sketchy, and it is difficult to know whether documentary sources are describing awnings, hoods, canopies, sunshades or parasols as we know them.   But in the 1600s women’s hand-held sunshades start to appear in a new phenomenon – the fashion print (often known as a fashion plate).  It took many decades more before parasols became really fashionable in the late 1770s.

The words ‘umbrella’ and ‘parasol’ were often interchangeable in the 1700s, and people probably used them to protect themselves from both the rain and sun.  Umbrellas were often made of silk, but tended to have larger covers to provide more protection from the elements. Parasols were smaller, lighter, and often highly trimmed. 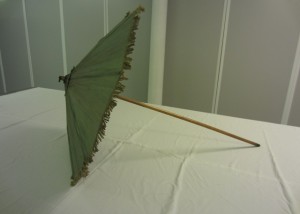 Apart from the early parasol above, the Collection has no other examples of the usual more delicate sunshades from the 1800s to the 1820s.  Most of the parasols are Victorian and Edwardian. 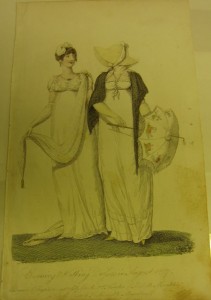 Parasols become a common sight with the rise of the middle class in Victorian Britain – having a suntan certainly was not fashionable! 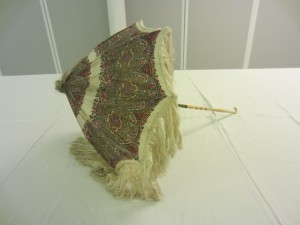 Carriage parasol from the 1850s. These parasols were hinged in the middle of the stick, making them easy to fold up and put away when not in use. TWCMS: D549

In the 1860s, according to the Englishwoman’s Domestic Magazine (snappy title!), a middle-class bride with an income of £400 to £600 a year, would be expected to have a trousseau of one umbrella and two parasols – one plain walking parasol and a fancier one. [2] 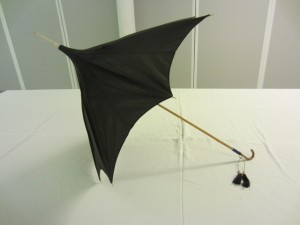 Walking parasols have longer handles and spikes. Parasol with a pagoda shaped cover in bronze shot silk, 1862 – 1870. This may have belonged to a member of the Richardson’s, a Quaker family from Newcastle. TWCMS: K2195

One of the most common styles, judging from its survival rate in museums, was the plain black parasol trimmed with silk fringing.  There are 11 in this Collection alone! 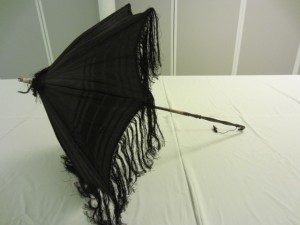 Caroline’s next blog post will talk more about the parasol collection including some of the more decorative ones in the collection and some parasols with mystery makers.

One Response to Here comes the Sun