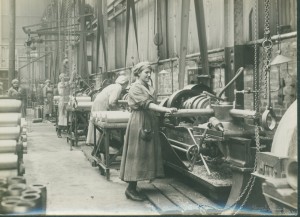 On December 5th 2014 I posted about a gold bracelet we had recently acquired, and its connection with the manufacture of 6” shells in the Neptune Engine Works of Tyne shipbuilders, Swan, Hunter and Wigham Richardson.

The post was illustrated with one photograph of newly forged shell bodies being stacked outside the shell forge, and another showing shells being machined and finished before being taken away for filling. They are two of a series of eleven photographs taken of the shell manufacturing process. Eight of the photographs are dated October 1917, while the shell stacking image is dated 6th November 1917. The last two photographs are dated 6th September 1918. All are the work of South Shields marine photographers, Frank & Sons. They are in the Swan Hunter collection of Tyne & Wear Archives and are numbered DS.SWH/5/3/2/3/1-6, 8-12.

In trying to understand more about the tasks undertaken by Jane Ellen, “Jenny” Bell, I have been looking closely at the photographs, and asking friends and colleagues with backgrounds in engineering and munitions to comment on their content. (1)

There is no photograph of the first part of the process, the forging of the steel shell bodies, but a superb painting of a London shell forge by war artist Anna Airy, brilliantly captures the scene. The painting belongs to the Imperial War Museum.  http://www.iwm.org.uk/history/war-industry-during-the-first-world-war#lightbox-object-106

Red hot, round cross-section, steel bars (billets) were forced into a die using a hydraulic press. The resulting rough shell body forgings were cooled before being taken away to be machined and finished. 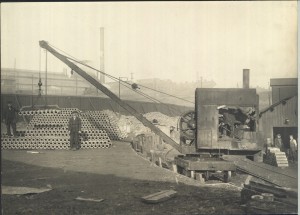 Neptune Shell Forge (right) with rail mounted crane stacking shell bodies on the other side of the tracks. 6th November 1917. TWAS : DS.SWH.5/3/2/3/2

Our first photograph is of a rail-mounted crane stacking the rough forgings outside the shell forge. Over 270,000 6” shell bodies were forged in the Neptune Engine Works. 100,000 of those were machined and finished on site in the Shell Shop. The other 170,000 were taken away to be machined and finished elsewhere.  The positioning of the stack next to the railway line would have made it easy to send shells to other engineering works by rail. The risk of explosion meant that shells were never filled near industrial and population centres. All the shells forged in the Neptune Engine Works would have been taken to a filling factory to receive their charge of high explosive.At the Board meeting of 15th June 1916 it was reported that over 8,000 shell forgings had been made, but only half of the required supply of steel billets had been received. 1,500 six inch shells were in various stages of progress, with about 100 finished. (2) 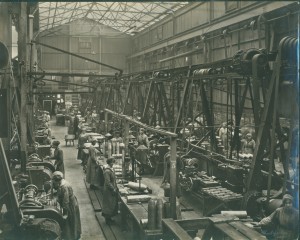 Moving into the Shell Shop, a general view looking down No. 2 bay shows long rows of machines and their operators, all women. The machines are belt driven with the belts coming down from line shafting which was driven by an electric motor at the end of the shop. Between the rows of machines is a line of wooden benches where inspections and other manual tasks can be carried out. 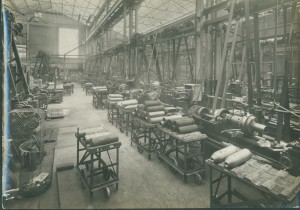 Loaded shell trucks in an empty shop. The shells with the rough, dark surface have come direct from the forge. TWAS : DS.SWH.5/3/2/3/9

This view shows the custom-built four wheeled trucks used to transport the shells between the different processes. The shell trucks are sturdily constructed of steel angle, with a planked wooden top. Shaped wooden supports stop the shells from rolling about but leave room to get hands in to pick up a shell. In one of the other photographs the limits for loading trucks are clearly stated on a painted sign – 9 unbanded shells or 5 banded shells. Since each shell weighed approximately 100 lbs (45 kgs), it was important that they were safely stacked. In the middle of this photograph one of the trucks has 13 unbanded shells on it!

Rough surfaced shells can be seen standing in the left foreground and further down the shop, indicating that we are looking at the early stages of the machining process. The photograph has written on the back “Rough trimming machines October 1917”. Four women are operating capstan lathes, each with three cutting heads. A fifth woman stands behind the line of operators and looks towards the camera. Capstan lathes are well suited for this kind of trimming process because they can perform multiple cutting operations in succession. There is no need to uninstall and then install tools, the operator just switches cutting head and the work can swiftly continue.

To the right of the picture, hanging from a chain, is a very handy device, a pivoted clamp that enables the operator to lift and position a heavy shell in a controlled manner. The chain runs up to a chain block that can be moved on a pulley along an overhead rail. The clamp is secure when the chain is tight, enabling a shell to be lifted, moved and lowered. When the chain is slackened off the clamp can be separated at the bottom and can be removed from the shell.

The Shell Shop workers wore ordinary shoes. The young woman in the foreground wears a low cut medium heeled shoe with a buckle on the toe and a strap across her instep fastened with a button. Further back, the woman putting her weight on a bar to release (or possibly tighten) the chuck of the lathe seems to be wearing a leather shoe with a galosh buttoned in place to cover her ankle and instep. Other photographs in the series also show men wearing ordinary shoes. 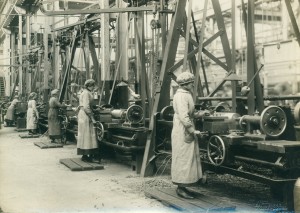 In this photograph shell bodies are shown being turned, with fine shavings of metal being taken off by static cutting tools held against the rapidly spinning shells. The swarf, long ribbons of metal, can be seen gathering on the floor to the left of the women operators. Written on the back of the photograph is “Finished turning machines October 1917”.

The women are wearing protective clothing, “Type A – the Overall Dress and Cap”, as specified by the Home Office in the booklet “Protective Clothing for Women and Girl Workers employed in Factories and Workshops”. (3) 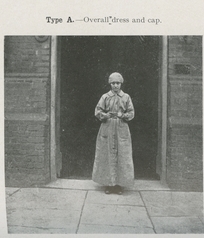 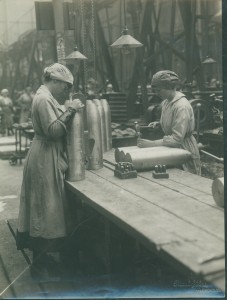 One of the most important tasks in the shop was the inspection of shells through all stages of production. During the Somme battles of 1916 many shells exploded prematurely because they were faulty. An improved inspection regime soon resulted in a premature explosion rate 15 times less than it had been at the Somme. In July 1917 there were 48,000 inspectors working for the Ministry of Munitions, six times as many as in July 1915.  Thirty thousand of these inspectors were women. Women were found to be better than men at carrying out the multitude of gauging processes. This was thought to have been because women were more consistent and patient than men. I don’t have the particular figure for 6” shells but an ordinary 18 pounder field gun shell had to go through 183 different gauging operations. When the great increase in shell production began, too few gauges were available, and only a small number of technicians were able to make them. Existing gauges had to be passed from place to place, like books from a public library. (4)

The woman on the left is inspecting a part finished shell, perhaps checking the interior screw thread of the nose that will eventually have a fuse screwed into it. The woman on the right is stamping shells to record that this particular inspection has been carried out. 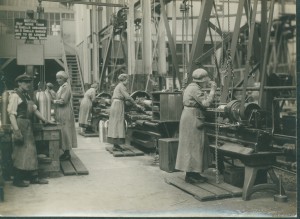 This photograph has written on the back, “Milling Machine (waving & grooving in distance). October 1917.” Three women are shown operating milling machines. Milling is an operation where the work (in this case the shell) remains still, or slow moving, and the cutting head rotates quickly. “Waving and grooving” refers to the cutting of waved grooves around the circumference of the shell. (5) A copper driving band is pressed into these grooves. All steel shells being fired from a rifled gun barrel require a soft metal driving band so the rifling is not damaged as the shell travels along the barrel. The grooves are waved so the driving band does not slip when the rifling of the barrel imparts spin to the shell. The copper band also creates a good seal so the shell is propelled efficiently out of the barrel.

On the bench to the left of the picture an inspector is using a screw gauge to check the interior screw thread of the shell.

The last two photographs in the series are of final inspections of shells, but taken a year apart. The shells have their driving bands in place and nothing else remains to be done to them. 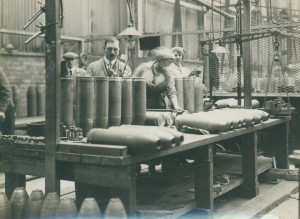 The first photograph was taken in October 1917 and shows, from right to left, a shell being check weighed on a large set of scales, an inspector using a screw gauge to check the interior screw thread of a shell, an inspector using a gauge to check that shells are of the correct length, and shells that have passed inspection being stamped on their bases. 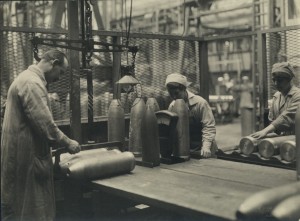 The second photograph was taken on 6th September 1918. The shells are having their length checked as before, but the weighing arrangements have become more refined. An inspector checks the weight of a shell against a standard weight – the dark, pointed “shell” on this side of the scale. The needle moves left or right from the central position if the shell is lighter or heavier than the standard weight. This will have been quicker than the previous arrangements and it also made it easier to judge whether or not a shell fitted within the allowed variation.

The huge expenditure of money, resources and labour transformed the shell crisis within two years. By the middle of 1917 the equivalent of the whole year’s supply of medium gun and howitzer shells for 1915 could be produced in 5 days. In 1914 the Germans were able to fire ten shots to one from the British. By the middle of 1917 the proportion was exactly reversed. Great Britain could fire ten shells to every German shell.

By February 1918 the Swan Hunter & Wigham Richardson directors were looking forward to the re-arrangement of two bays of the Engine Works when the machining of 6 inch shells was discontinued. In March 1918 the board discussed adapting the bays for marine work, at an estimated cost of £12,500. The directors agreed to go ahead subject to a contribution from the Treasury. They thought this would happen by the end of June, although the photographs dated 6th September 1918 suggest that production of shells continued for longer than that. It seems likely that the German spring offensive followed by Allied counter attacks kept up the demand for shells, so munitions work continued. The eventual cessation of shell production doesn’t get a mention in the board minutes. 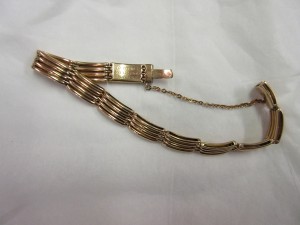 So, to return to Jane Ellen, “Jenny”, Bell, what happened to her and her fellow workers? Almost certainly they all lost their jobs. Shell manufacture was purely a wartime activity for the Neptune Engine Works so when production ceased Jenny and her colleagues were no longer needed. The engineering skills acquired by the women could have been applied to the marine work which would in future be carried out in the Shell Shop bays, but the Restoration of Pre-War Practices Act of 1919 ensured that those jobs would be given to skilled men returning from the war.

Jenny Bell surely enjoyed her war work in the Neptune Shell Shop or she would not have kept a bracelet that reminded her of it. The camaraderie, the shared feeling of making a contribution to the war effort, and, at the end of the week, the wages, made munitions work a pleasurable and satisfying experience for most women. Having speculated in Part 1 as to how Jenny Bell acquired the bracelet, I am increasingly of the view that she bought it, and had it inscribed, to remind her of a happy and fulfilling period of her life. 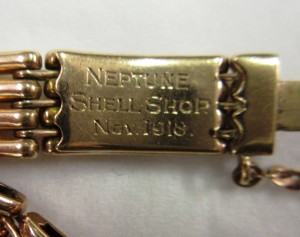 The bracelet and copies of some of the photographs can be seen in Coal, Ships and Zeppelins: North Tyneside in the First World War at Segedunum Roman Fort and Museum, Wallsend. The exhibition continues until 26th April 2015.