For most, the Second World War ended on 8 May 1945 with VE Day. For my grandpa and his family there was still no end in sight. My grandpa had not been home for 5 years and did not return until 1946.

My grandpa, Harrold Harry (the story is, his mum got flustered at the Christening), at 6’2” was a gentle giant. He made miniature furniture to scale and teddy bears for the church fete. He was a mechanic and always smelt of engine grease. When he got home he would wash his hands with green Swarfega, which he mysteriously still needed to use even after his heart attack when he was only meant to do paperwork!

My mum was 5 when he went to war and her brother Michael was not yet born. He was 5 years old before he met his dad.  He sent home sugar and a doll in a sari from India and that is really all I know of his time in the war. Like most men of his era he never spoke about what had happened. To my shame, it is only recently that I ever thought to find out. 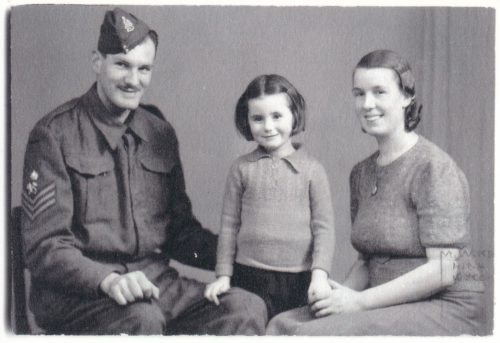 My grandpa Harry, My mum Patricia (5) and my gran Violet before Harry left for Burma

Harry’s part in the War
Harry started as a Lance Corporal in the Royal Fusiliers (London Regiment) but transferred to the Royal Engineers in 1940 where he could put his mechanical skills to use. He became an A.S.M (Artificer Sergeant Major) this is the equivalent of a warrant officer 1st class, the highest of non-commissioned ranks. He was offered a commission but refused it, he didn’t see the point, he just wanted to get the job done and go home! 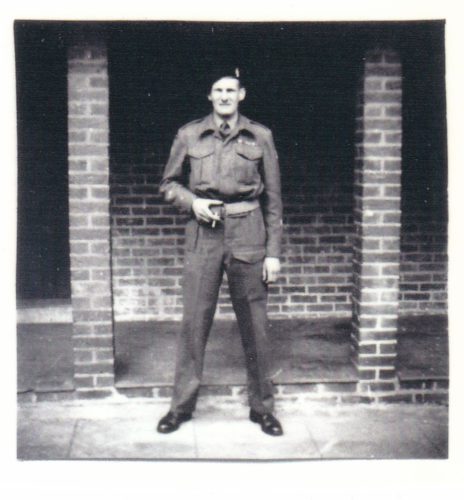 Harry before he went away?

At the beginning of the Second World War as more complex weapons and vehicles were developed, it became increasing difficult for the Army to provide men proficient in their maintenance and repair. The Royal Electrical and Mechanical Engineers (REME) was developed to meet these challenges. The unit was comprised of dedicated technicians, mechanics and electricians; and drew its personnel from the Royal Army Ordnance Corps, the Royal Army Service Corps, the Royal Engineers and the Royal Signals.

Field Marshal Bernard Law Montgomery remarked that REME would ‘keep the punch in the Army’s fist’. The unit went on to provide a vital service, keeping the Army moving and fighting in all theatres.

The REME units were attached to different divisions. Harry’s was attached to the 6th Infantry Brigade of the 2nd Division. In 1942 he was in the 21st Field Park Company – these were the units that were the supply point for all materials and engineer stores, used by the Field Squadrons/Field Companies and only occasionally did they become involved with combat.

Where did he serve?
The 2nd Division were based in Yorkshire, and following returning from France were sent to India in 1942 under command of Major-General John Grove. I have no idea if Harry was in France if so, he never mentioned it but both the 2nd Division and The London Fusiliers were evacuated from Dunkirk.

My grandpa arrived in India after Burma (now named Myanmar) had been lost to the Japanese and was stationed in Northern India. The Asian Pacific war had been going on with China since 1937. The British and Allies became involved when Japan had invaded Hong Kong and Pearl Harbour in 1941. It was by far the largest war front involving troops from every continent of the globe. 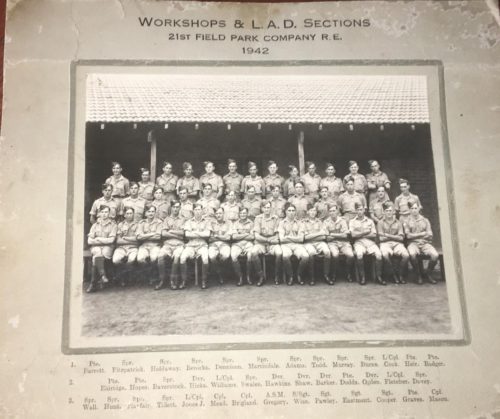 In late October 1942 the 6th Infantry Brigade was temporarily detached from the division and reorganised as an independent brigade group, complete with its own supporting units. They served in the failed Arakan Campaign, re-joining the rest of the division in India in June 1943. It is possible that the REME unit was part of the support team keeping the tanks running.

In August 1943 the Allies created South East Asia Command (SEAC), a new combined command responsible for the South-East Asian Theatre, under Admiral Lord Louis Mountbatten. The training, equipment, health and morale of Allied troops under British 14th Army’s Lieutenant General William Slim was improving, as was the capacity of the lines of communication in North-eastern India.

An innovation was the extensive use of aircraft to transport and supply troops, as supplies had been an issue from the beginning of the war. Partly because the war in Europe had priority for equipment and supplies but also due to the lack of infrastructure within Burma, with few pathways that would generously be called roads. The rivers were inaccessible in most places due to steep inclines or rapids making them of little use as a supply line. The troops with few supplies and in tropical conditions, were more likely to die of Malaria or other tropical diseases than they were by the enemy. As the war in Europe slowly drew to its conclusion, the authorities finally turned their attention to the needs of the troops in Asia.

“I understand that you believe you’re the forgotten army. That’s not true … The truth is nobody ever bloody well remembered you!”
(Lord Mountbatten far east commander , addressing men in Burma in 1943) 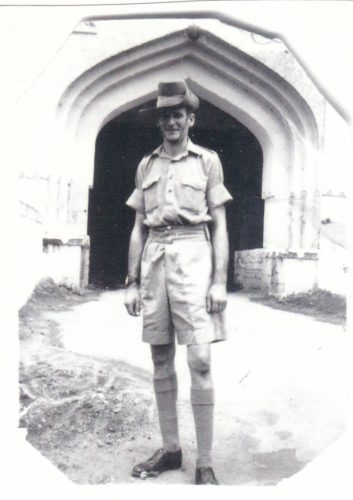 Harry in his uniform in India/Burma?

In 1944, the Japanese launched an invasion of India. The 2nd Division was sent to join the 14th Army’s XXXIII Corps at Dimapur to fight its way down the road to relieve the besieged position at Kohima. Kohima was relieved on 18 April but heavy fighting continued in the disputed position. Until, under increasing pressure from a buildup in Allied forces (the 2nd Division had been joined by the 7th Indian Infantry Division in early May) the Japanese, having run out of food and supplies, were forced to withdraw and the Battle of Kohima was to all intents concluded at the end of May.

XXXIII Corps then tasked the 2nd Division to advance south down the road towards Imphal with the 7th Indian Division, following up the retreating Japanese forces over the rough terrain to the east of the road. On 22 June the 2nd Division made contact with the 5th Indian Infantry Division advancing northwards from Imphal and the siege of Imphal was relieved. Both battles were some of the fiercest fighting of the war with Kohima labelled a miniature Stalingrad, due to the ferocity of the fighting on both sides. The epitaph carved on the memorial of the 2nd Division in the large cemetery for the Allied war dead at Kohima reads –

When You Go Home, Tell Them Of Us And Say,

For Your Tomorrow, We Gave Our Today

The only thing I remember my grandpa saying about his time in India is that he marched from India and across Burma. 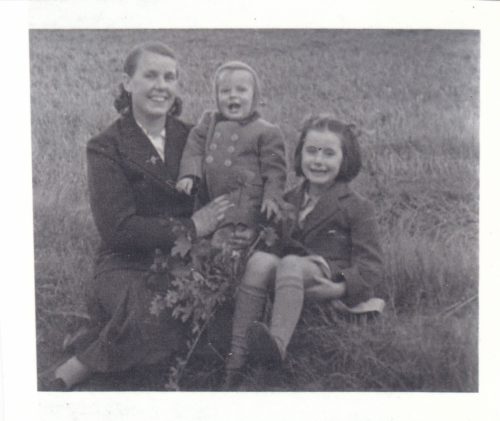 The family back home his only connection to his newborn son.

The eventual end of the War
1944 commenced with the British forces once again undertaking a limited offensive in the Arakan. This time, the Japanese counter attacked as part of a major offensive to invade India. The British forces did not retreat this time, but formed ‘boxes’ and fought tenaciously. This included the ‘Battle of the Admin Box’, where the 7th Indian Division successfully resisted the Japanese offensive, with XV Indian Corps defeating the advance. This was, however, only the pre-cursor of the main offensive directed at Imphal and Dimapur. Major battles were fought at Sangshak, Kohima and at Imphal; all intense, fierce and savage encounters. The Japanese were comprehensively defeated and retreated in chaos.

The 14th Army followed up the Japanese retreat, with then General Slim launching his masterstroke with the crossing of the Irrawaddy River to threaten Mandalay, but then striking at Meiktila. The victory of the 14th Army at Meiktila, with the subsequent capture of Mandalay was in many ways the most decisive of any British military victory on the ground in the Second World War. The Japanese Burma Army was destroyed as a fighting force, allowing a two-pronged thrust to capture Rangoon. Meanwhile, XV Indian Corps had fought an amphibious war down through the Arakan. This included the capture of the island of Akyab, the landings at Myebon, Ramree Island and Ruywa, and the battles of Kangaw and the An Pass, as fierce and savage as any in the campaign. The Japanese 28th Army was forced to retreat through the Arakan Yomas and breakthrough 14th Army to escape, which not many did successfully.

The Homecoming
The Burma campaign ended in September 1945 but this was still not the end for Harry. The 6th Brigade (again reorganised) sailed to Singapore in December 1945. The division  disbanded in India in October 1946 and my grandpa could finally go home.

My gran used to tell us the story of when he came home. Michael was born after Grandpa left, and only knew him from a photograph in his scout uniform that was hanging on the wall. Harry arrived after the children were in bed and when Michael came in in the morning he saw Grandpa’s Burma hat on the bed head, which looked like his scout hat in the photos and ran over shouting “Daddy.”

My grandpa went on to have a happy life unlike so many of his comrades. He died at home holding the hand of his beloved Violet in 1994 after meeting his first great grandson. Many never got that chance and some of the horrors experienced by the prisoners of war that survived scared them for life.

With the 75th anniversary of VJ day the Burma Star Association finally closes its membership. My grandpa was a member and it was probably the only time he was able to be with people that understood what he had seen. Some things are best forgotten, but the valour and comradeship of the many troops from the many nations that fought together for our freedom is not one of them.

As a charity, Tyne & Wear Archives & Museums rely on donations to help us continue  providing our services to the public, and our closure, whilst necessary, has significantly impacted our income. Please, if you are able, help us through this difficult period by donating by text today. Text TWAM 3 to give £3, TWAM 5 to give £5 or TWAM 10 to give £10 to 70085. Texts cost your donation plus one standard message rate.  Thank you.