The Art of Nature Part 2: Edward Lear – A guest blog by Immy Mobley

Hello, my name is Immy and I am researching the use of art in natural history illustration during my placement at the Great North Museum: Hancock Library. The Natural History Society of Northumbria (NHSN) has a wonderful collection of books about the natural world that is located in the library. Many of these have beautiful illustrations with examples dating back to the 16th century. 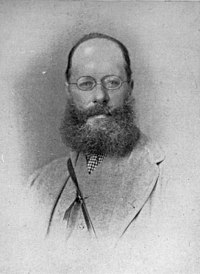 Edward Lear was a prolific painter of natural history subjects in the 1830s, for which he earned universal praise for the accuracy, originality, and elegant style of his depictions of birds and other wildlife. During his brief yet intense focus on natural history, his ability to capture the life of his subjects would ensure him a lasting place among the great natural history painters of all time.

David Attenborough said ‘Other animal painters may have other ambitions – to convey the character and temperament of a particular living creature at a particular time. To excel in both skills is rare. And the ability to combine both aims in one picture is even rarer. Edward Lear was able to do so, and with such success that he may fairly be accounted one of the greatest of all animal history painters.’

The NHSN library has two of Lear’s most famous and popular publications: “Illustrations of the Family of Psittacidae, or Parrots” published in 1832 and “Gleanings of the Menagerie and Aviary at Knowsley Hall” published in 1846, both of which I was mesmerized by.

After discovering his passion for wildlife from an extremely early age, Lear was quick to realise that the Zoological Society of London would not only provide him with a source of appealing subjects for his pencil and brush, but also the opportunity to secure illustration commissions from the naturalists and wealthy patrons associated with the society. He was especially besotted by the parrots, and decided to paint as many as he could. In June 1830, at only the age of 18, he formally applied for, and received, permission from the society’s council to make drawings of all the parrots in its collection for the purpose of creating a book on the subject. Lear ended up creating 42 hand coloured plates that would comprise “Illustrations of the Family of Psittacidae, or Parrots: The Greater Part of Them Species Hitherto Unfigured”, which was issued in parts between 1830 and 1832. It was the first English natural history book to focus on a single family of birds, and allowed Lear to become the artist of choice for many leading ornithological publishers in Britain during the 1830s.

He sketched the parrots from life, adding detailed notes in order to capture them and then re-drew them in reverse on the lithographic stones from which the prints were taken, and then coloured by hand. He measured wingspan, length and legs while the zookeeper held the bird still. He then chose their most defining poses, the tilt of the heads, and details of their colour and texture with great accuracy. This was done at a time when natural history drawings were traditionally made in profile from stuffed specimens. I think that a great example of capturing the birds life-like pose, in particular the ruffling of the feathers and the glistening eyes, is the Blue and Yellow Macaw. 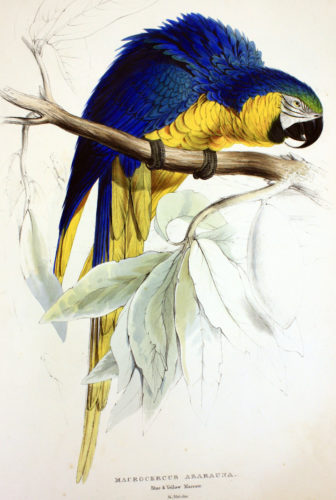 He made his pictures large enough to have an impact, but did not aspire for them to be life size, as the lithographic stone would have been too heavy to move for the larger species. He would first make a sketch with pencilled colour notes, and later draw or complete it with watercolour washes, tracing his pencilled notes in ink. It could be said that the subject matter of Lear’s parrot book may have contributed largely to its success, as of all birds, parrots are among the most appealing to humans. I certainly enjoy the bold, bright colours, and the thought that a bird could possibly communicate with us by talking our own language. Maybe it was his inexperience, lack of academic training, and his naivety in the field of scientific illustration which freed him from the confines of existing traditions, allowing him to add life and movement to his work. Nevertheless, this did mean that his book lacked scientific information. Lear was aided when attempting to identify the birds he painted, but this was sometimes inaccurate as there was still so little known about the birds he was depicting. After many hours of observation, he became highly knowledgeable, leading him to discover several new species, including a large all blue Brazilian parrot, named after himself (Anodorhynchus leari).

Lear’s parrot book caught the attention of who would be his single most significant investor, who at the time was looking for an artist to assist him with his plans to publish an illustrated book on his rare collection of birds and animals. Located at Knowsley Hall, near Liverpool, the thirteenth Earl of Derby was president of the Zoological Society, and therefore aware of goings on in the scientific world. A mutual interest in parrots is almost certainly what brought the wealthy patron and the talented artist into contact with each other. It was on his behalf during six or seven years in the 1830s, that Lear created many of the finest natural history paintings of his career. The Earl established a private menagerie and aviary, which at the time of his death, would be described as the most complete and important private zoological collection in the world, providing Lear with unlimited subjects and the opportunity to secure and expand his reputation as a natural history painter. Not only did this relationship help Lear stabilize his previously fragile economic condition, but it also boosted his confidence as an artist and as a person.

Once again, in the “Gleanings of the Menagerie and Aviary at Knowsley Hall”, which was published in 1846 including a number of Lear’s bird and mammal portraits, several of the species depicted were new to science. This allowed the book to achieve a lasting place in scientific literature, and for it to rank alongside Lear’s Parrots as one of the rarest and most desirable colour plate books of the nineteenth century. 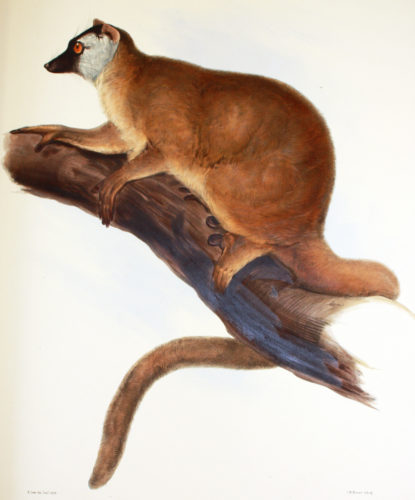 The illustrations from Knowsley Hall menagerie are not as rich in colour or as spectacular as his paintings of the parrots. Each animal, however, is depicted with a convincing lifelikeness and an undeniable accuracy. I am astounded by how talented and dedicated Lear was at an incredibly young age, and the sheer number of lithographs he managed to create and publish in such a short period of time.

As much as he enjoyed his time at Knowsley Hall and the financial security, by 1836 Lear felt a growing desire to move beyond the increasingly repetitive routine of delineating caged birds and mammals. At the age of just 25, his ongoing health problems began to worsen, and the English winters became too much for him to endure. His declining eyesight meant that he could no longer meticulously draw the details he once could, and consequently his career as a zoological illustrator was to end.

The Earl’s generosity enabled Lear to move to the warmer climate of Rome and turn to landscape painting, creating oils and watercolours of the beautiful places he travelled to. He published two books of lithographs from his landscape paintings called “Views in Rome” (1841) and “Illustrated Excursions in Italy” (1846). Though Lear is also remembered for his zoological studies and his landscape painting, his Book of Nonsense series made him a household name and would achieve for him the sort of literature immortality that few others share. He revolutionized children’s literature, and continued to create limericks and drawings along his travels.

The Great North Museum: Hancock Library is free to use and is open to everyone. As well as the copies of Lear’s “Parrots” and “Gleanings” it also has other examples of this artists work, and a number of books about his life and achievements.

One Response to The Art of Nature Part 2: Edward Lear – A guest blog by Immy Mobley