Sketched in the landscape – Constable’s ‘Dedham Lock and Mill’ 1817 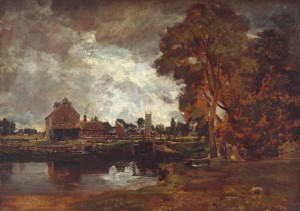 One of the treats for me of the Laing’s current exhibition of Sketching from Nature is Constable’s large oil study of Dedham Lock and Mill. It has such vibrancy and immediacy – we can feel that we’re looking through the artist’s eyes as he records his response on the spot to the actual place. That’s even more evident in the contrast with a later, more serene, composition he painted from this sketch, which is reproduced further down this blog.

Constable has painted the watermill at Dedham, with the River Stour in the foreground. When he was young, Constable worked in the mill, which was owned and run by his father. Beyond the mill we can see Dedham church, in the centre of the village where Constable went to school. It was a landscape that meant a lot to him. He said:

I should paint my own places best. Painting is but another word for feeling, and I associate my “careless boyhood” with all that lies on the banks of the Stour; these scenes made me a painter, and I am grateful.

Constable painted this scene during a period of several weeks when making a visit with his wife Maria to see his family and his home area of the Stour valley. The fact that he was painting his father’s mill meant that he had a place to store an easel and canvas. He was able to set up every day to paint outdoors. So, it’s not a record of the light of a particular moment, but it does aim to capture the character of the place. A big part of that is the sky, which Constable described in a letter as, ‘…the “key note”, the standard of “Scale” and the chief “Organ of Sentiment”.

The sky in his sketch is not conventionally sunny, but it does have a sense of light, with bright white clouds in the centre and patches of light blue sky – their brightness is emphasised by the contrast with the dark clouds around. The diagonal direction of the grey clouds behind the trees brings movement into the scene, and this is increased by Constable’s tremendously vigorous and blocky brushwork in the sky. The reflection in the water brings the sky’s light down into the landscape. At the same time, there’s a definite sense of atmosphere and weather that adds to the conviction of reality and truthfulness that Constable creates. 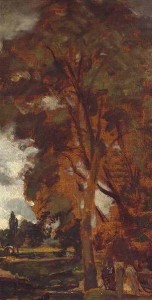 The trees on the right, where the canvas has been left unfinished, reveal Constable’s working method. First, he covered the canvas with a thin wash of brown colour. This provided a warm base, with a mid-tone from which he could work up or down to highlights and deep shadow. Then, he sketched in the basic shapes of the trunks and branches in light and dark brown paint – and he would have done the same for the other structures in the rest of the composition. From there, he focussed on working up the most important parts of the picture. 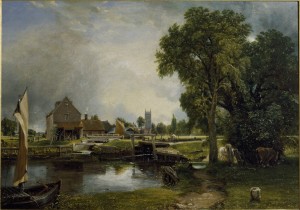 When we come to compare the sketch with a finished version of 1820 (painted at the same size), there are evident differences. This is a greener, brighter, calmer place. Those dark rain clouds in the sketch have been transformed into a light shower on the left of the sky. Under the trees, there are animals, which were just a few unidentifiable lighter brushstrokes in the sketch. And on the left, there’s a boat to lead our eye into the composition. This picture is in the collection of the Victoria and Albert Museum, where it is currently on display (details here). It’s a lovely picture. But, for me, the vigour of the large sketch makes it a really interesting and compelling painting. In Britain, we’re often accused of being obsessed with weather – but perhaps that’s what makes landscape interesting!

There are details about the exhibition (ticket entry) here, and there are two more of my blogs here and here, if you would like to read more.