Fresh, vivid, spontaneous – this is one of Turner’s most attractive oil sketches, I think. He’s responding to the visual sensations of this spot on the River Thames – the colours and shapes of the landscape, and the light flooding the scene. It’s complete in itself – no larger painting was ever painted from the sketch. Turner painted this scene from his boat, moored in the middle of the river, where he could get a really expansive view and make the most of the light reflecting from the water. He got a boat probably at the time he started renting a riverside house in 1804. Turner embarked on trips along the river in summertime for the next few years, fishing and painting, and tying up overnight at convenient landing places. His oil sketch of The Thames Near Walton Bridges is on show in the Laing’s current exhibition (ticket entry) of naturalistic landscape

sketches and paintings – Sketching from Nature, selected from the Tate collection, London. 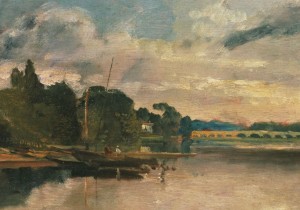 Turner’s sketch is full of colour, which is really quite bright in places – for example, the blue hills behind the yellow arches of the bridge in the distance. In the sky, he’s balanced the bold blue smear and white dashes of cloud with the subtle colours of the setting sun on the horizon. He’s concerned with impressions, not with fine detail – little blobs of paint indicate ducks on the water near boats moored along the river bank.

Turner’s rented house was at Isleworth, near Richmond (both places were still little villages that time), and Walton is not far away. This stretch of the Thames was idyllic countryside, though it’s now effectively part of greater London’s urban sprawl. Turner’s boat was really his mobile studio, making it possible for him to paint such a relatively large open-air sketch (72 cm wide). It’s on mahogany – a close-grained wood very good for painting on, but very heavy. On the boat, he could easily carry his painting equipment and didn’t have to worry about smudging wet oil paint – he could put his sketch aside to dry. His boat opened up the experience of painting in the open air in oil paints, with all their variety and flexibility of expression. He didn’t need to rely on interpreting pencil outline sketches or notes in watercolour back in his studio. Memory and imagination were important to him, and so too was the inspiration of old master paintings. But capturing his immediate sensations in oil in the open air also had major significance for the growing naturalism of the way he depicted the light of landscape scenes in studio-painted pictures. 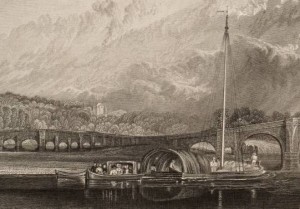 Turner’s own boat may have looked rather like the small boat on the left of this detail from an engraving of a view Turner painted very close to Walton Bridges. (As the print detail shows, the two bridges were linked by an island in the river.) Like the small craft in the print, Turner’s boat would have had a canopy to protect him and his equipment. He may have rowed his own boat, or hired a lad to do it for him.

Alongside Turner’s oil sketch of The Thames Near Walton Bridges, there are another 9 sketches by Turner in the exhibition, dating from 1805 to 1809. They range from tiny panels that he could carry into the countryside in his pocket to large pictures on canvas which he cut from a roll he transported on his boat.

My earlier blog looked at John Constable’s Hampstead Heath with the House Called ‘The Salt Box’, also in the Sketching from Nature exhibition. Both Constable’s outdoor painting and Turner’s sketch are wide, airy views. Constable chose, as usual, a landscape scene that he felt emotionally connected to, and his naturalistic representation of the sky is a crucial part of the picture. Turner’s interest was much more the light plus the ‘abstract’ qualities of form and colour in the scene, it seems to me – see if you agree!

One Response to JMW Turner : The Thames Near Walton Bridges, 1805