Read part 1 for an introduction and numbers 10-6

From the Elizabethan Age until the 19th Century, the pincushion was seen as an essential element of a woman’s boudoir with a beautiful, decorative cushion needed to house her large collection of costly pins. A well-equipped lady would need to own several thousand pins for dressmaking purposes. As well as for needlework and lace-making, pins were also used to fasten garments. A woman would also need to carry a small supply of emergency pins while she was out in case she needed to fix any mishap with her dress. These were often carried in small cylindrical cases known as pincushion boxes or pin poppets.

The ownership of a beautiful, skilfully embellished pincushion (usually handmade and hand embroidered by the owner) was also used as a way to demonstrate a women’s female accomplishments and needlework abilities. This would denote a woman’s capacity to manage her household through the making, mending and decoration of clothes for herself and her family.

In the past, pincushions were not merely seen as practical household items but as keepsakes, decorative objet d’art, trinkets, souvenirs, treasured gifts and even family heirlooms.

Here are my final 5 pincushions. 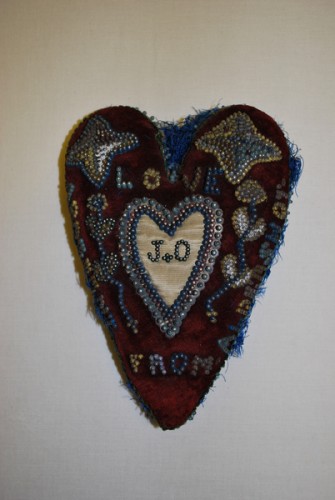 Large ‘Sweetheart’ pincushions such as this one appear frequently during the Victorian era and are often richly embellished with glass topped pins, metal sequins and fringed edging. They were commonly given as gifts and love tokens. This pincushion was presumably given by a man from Aldershot as a present to his wife of girlfriend. The front of this highly decorative pincushion is of burgundy velvet and decorated with glass topped pins which form the inscription ‘A present love from Aldershot’. Pins are arranged in flowers and star shapes on either side of the pincushion. There is a contrasting heart-shaped piece of cream silk satin in the centre of the pincushion with the inscription ‘J + O’. This example dates from 1800-1899. 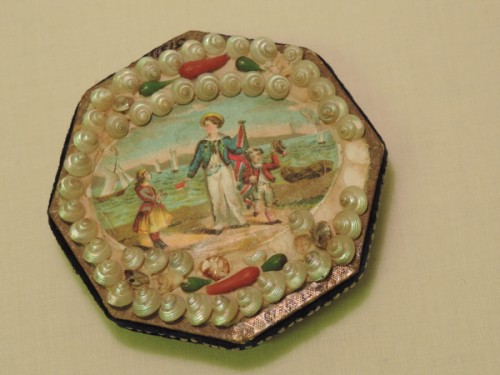 This pincushion dates from 1899-1919 and was most likely purchased as a souvenir keepsake during a seaside holiday. The front and back are surrounded by a border of small iridescent moon shells. On the front is a painted scene of three children playing on the beach with boats in the background. Pins would have been stuck around the outside of this pincushion.

Towards the end of the Georgian era, a London manufacturer, of Paternoster Row, began to make some of the first souvenir pincushions with picturesque views or buildings of historical interest, printed on silk, to be sold as souvenirs at popular bars and pubs. Pin wheel cushions of this time often feature similar decoration with a picture painted on silk or fine fabric. Handmade crafts and artwork made with seashells was very popular in during 19th century. During this period several magazines offered instructions in shell handicrafts and sold quantities of shells of various shapes and sizes to be used for different projects. 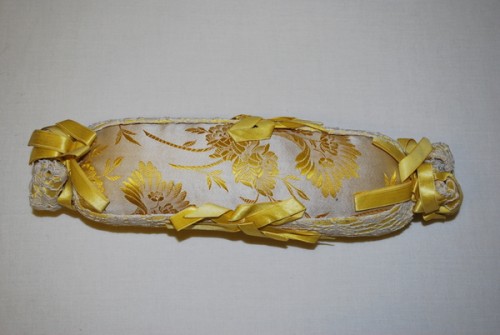 This gold and cream brocade pincushion is encased with cream lace and decorated with canary yellow silk ribbon and bows on each side. This pincushion dates from 1800-1899. Many court dressmakers made extra money by selling scraps of costly, embroidered cloth to be made into pincushions. Pincushions were made from material used from unwanted articles of clothing such as embroidered waistcoats or brocaded gold and silver gowns.  Pincushions would even be constructed out of scraps from an outfit worn during a special occasion.

Some Pincushions of this period were embroidered with political messages or slogans as well as bible verses and religious sentiments. Such items could be used to display the personal views or pious high-mindedness of the owner. 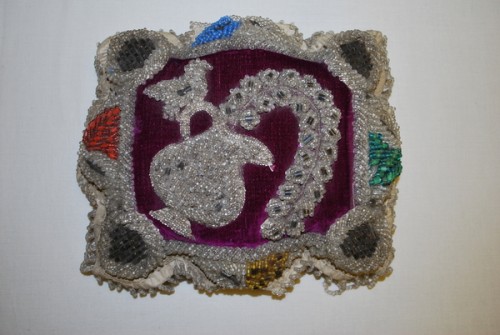 This large, richly embellished pincushion dating from 1800-1899 is densely covered with clear glass seed beads and bugle beads of grey, yellow, red, green and blue. It is decorated with image of a pouring jug with a small bird resting on the handle and is edged with a decoration of looped clear seed beads. Items like these could be bought, or made at home. In the 19th Century, magazines like ‘The Englishwoman’s Domestic Magazine’ showed readers how to make various needlework objects including pincushions. The fine needlework skills honed by ladies in the embroidery of samplers in the 19th century was put to good use in the making of attractive personalised pincushions.

During the Victoria Era, with the advent of the Industrial Revolution and mass production, pincushions and other sewing tools were produced more cheaply and at a faster rate than ever before. Highly decorative pincushions were produced in large number in a wide variety of shapes including crinoline dolls, fruit, wheelbarrows, books, hats and animals.

Pincushions become more of a necessity in the home during this time.  ‘The Ladies’ Work Table Book’ (published in 1858) decreed: “A large pincushion, having two covers on it should belong to each toilet table. The covers are merely a bag into which the cushion is slipped. This may be either worked or plain and should have small tassels in each corner and a frill fringe all round.” 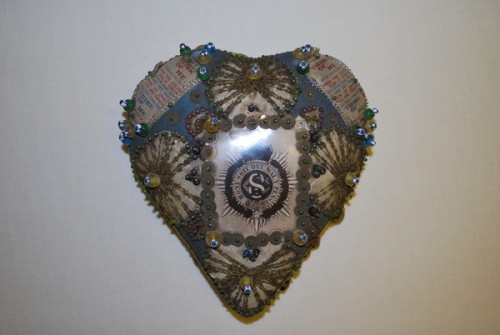 This elaborate pincushion dating from 1800-1899 would have been made by a soldier who was away fighting at war as a gift for his wife or girlfriend. From the Boer War until WW2, it was traditional for British soldiers and sailors to make pincushions for their wives, mothers and girlfriends at home. Queen Victoria who was very fond of needlework, first suggested that soldiers be encouraged to take up needlework as a therapeutic distraction from the rigours of battle. Many soldiers were given special commercially sold kits to make pincushions such as this one. Many pincushions were made using feed sacks, horsehair, scraps and velvet ribbon and felt. This type of pincushion is usually heart shaped and highly decorative. This pincushion is decorated with glass-topped pins stuck through beads and features a coloured woven silk message, flags and the regimental name and badge. The woven silk squares with the messages which decorate either side of the pincushion are known as cigarette silks. A cigarette silk is a small piece of printed or woven satin which was given away in men’s cigarette packets as part of a marketing ploy. Similar silks were also given away in cigar packets. Many of these types of pincushion were preserved as important family keepsakes.

This Pincushion from the Imperial War Museum’s collections was made using the same cigarette silk design: http://www.iwm.org.uk/collections/item/object/30083766

I hope you have enjoyed this blog post – thank you for reading.