My name is Zoe-Marie Dobbs and I am a volunteer with Tyne & Wear Archives & Museums. For the past few weeks, I have been photographing and researching the collection of pincushions in the costume store at the Discovery Museum. The pincushions in the collection span across a wide variety of different time periods and demonstrate whichever embroidery technique was in fashion at the time.

Pins in some form or another have existed since the prehistoric era and as long as pins have been in existence there has always been the need for receptacles to put them in, whether they serve a purely utilitarian purpose or are more decorative.

During the Early Modern era, pins were a very expensive commodity. For the poor they were considered to be a great luxury. In A History of Needlework Tools and Accessories, Sylvia Groves states,  “In the reign of Queen Elizabeth I, a large and well-filled pincushion was an essential toilet accessory for every woman of rank. The Queen herself received, among her New Year’s gifts in 1562, an elaborately embroidered pinpilllow”. 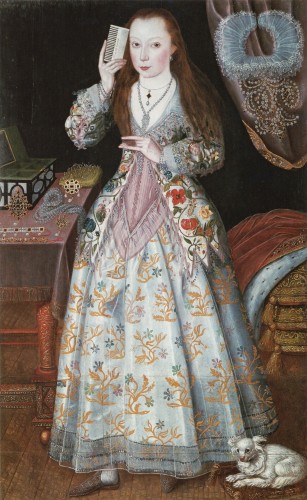 The Countess of Southampton

In the above painting of the Countess of Southampton (one of Elizabeth’s maids of honour), a large pincushion filled with pins is presented on a table beside a case of jewels – this demonstrates the high value placed on a lady’s pincushion and her costly supply of pins.

During this time, on the eve of New Year or on New Year’s Day, it was customary for women to receive presents of pins or the money with which to buy them. This is where the expression ‘pin money’ comes from. Before the 16th century, the best quality pins had to be imported from France.

This is my countdown of my top 10 pincushions in the collection: 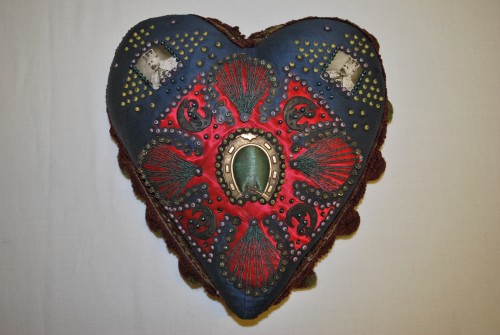 Apart from serving as purely functional objects, pincushions were also used as keepsakes and mementos. Many were created to mark a historical event or special occasion, such as this one to commemorate the coronation of George V, made in 1911. Heart-shaped pincushions were extremely popular throughout the 19th century and the early 20th century. This highly decorative example features a blue and red silk satin front, a burgundy pom-pom fringe and is decorated with two pictures of George V in coronation robes. I found this particularly interesting as it is the only pincushion in the collection at the Discovery Museum which is decorated with photographs. 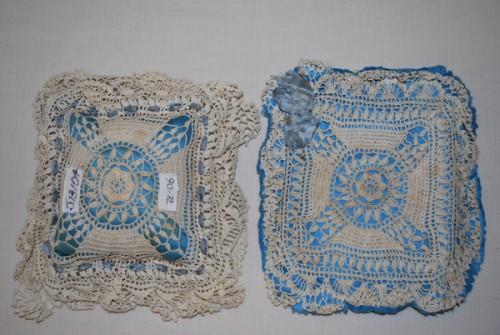 This pincushion and cover dating from 1800-1899 are blue silk and decorated with beautiful hand crochet work. Crochet was especially popular during this period and features in many Victorian garments such as shawls as well as pincushions and other items. After receiving a gift of intricate Irish hand-worked crochet in the 1840s, Queen Victoria began enthusiastically adding crochet to her dresses and bonnets. 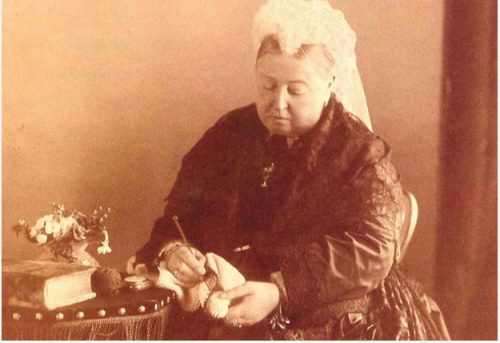 The well-to-do ladies of Victorian England soon followed suit and the demand for crochet skyrocketed. The publication of crochet patterns became widespread with magazines offering instructions on how to make a variety of crochet items including babies’ bonnets, doilies, evening bags and parlour clothes as well as trims for clothing. Crochet was often used as a cheaper alternative for more costly lace. 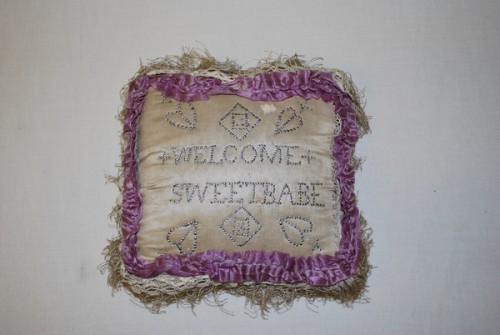 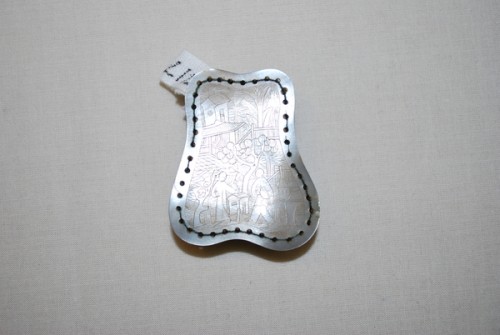 This pincushion is comprised of a flat pincushion sandwiched between two carved mother of pearl discs which depict an eastern countryside inspired scene. One side of the intricate carving displays the image of two men surrounded by trees and the other side features a dog and cat sitting in a field beside a tree and several houses. Pins would have been stuck around the outside of the pincushion. This example dates from 1800-1899. Pincushions of this type first appeared in the 18th century were often made with two pieces of elaborately carved ivory stitched onto a flat cushion encircled by silk ribbon. These were worn suspended from the waist by a loop. In the 19th century pincushions were produced in larger number than ever before. With the mass manufacture of pins there arose a higher demand for pincushion which were now seen as mandatory household items. The Ladies’ Work Table Book (1858) decrees that: “A large pincushion, having two covers on it should belong to each toilet table”. Pincushions were made in a wide variety of shapes and sizes, using different materials such as ivory bone, wood or patchwork with stuffing. Mother of pearl cushions were commonplace as well as small animals and shoes made of base metal. 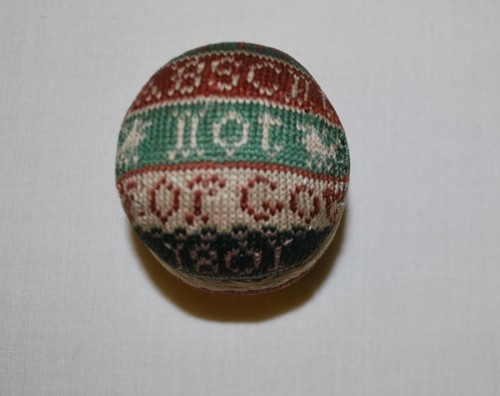 This pinball cushion dates from 1801 and was probably purchased at a souvenir from the Ascot horse race of that year. Pinball pincushions were usually covered in knitting and crochet and were worn suspended from the waist. These are typically emblazoned with a date and the owner’s initials. Pinballs were often made in two pieces, stuffed with cotton wool and joined together with stitching or braid. This pinball pincushion is covered with red, green, cream, pink and blue silk thread. The front bears the inscription: ‘Ascot not forgot 1801’ with the image of two horses on either side in cream thread. The back is inscribed with the initials S L. This type of pincushion was favoured 18th century when fine silk knitting was in fashion.

Read part 2 for my top 5 pincushions