Loading Gauge found to be unsafe and is removed from site for conservation works.

Arbeia South Shields' Roman Fort
Posted by administrator on July 7, 2011     Permalink     Leave a comment
When the recent landscape improvements at Monkwearmouth Station Museum uncovered the loading gauge to full view again, thoughts turned to conserving both it and also the railway signal. (Read more in my previous blog post here). Appropriate repairs and a new coat of paint would make both of them look resplendent again.

However, an inspection on 30 of June showed that there was quite a large amount of wood rot in both posts. 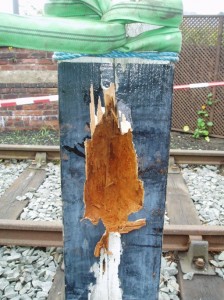 Although from a distance the posts looked solid a closer look started to show the post was in poor condition in places.

The signal post can be repaired insitu but the extent of the rot to the loading gauge post was such that it was recognised that the safest and most responsible thing to do was to remove it before it fell over. To that end Dowse Cranes, who have a long and succesful record with Tyne & Wear Archives & Museums doing heavy lift work on projects, was asked to come up with a plan for removing it and the work was carried out on the morning of the 6 July using a lorry with a loading crane, working from the adjacent lane. 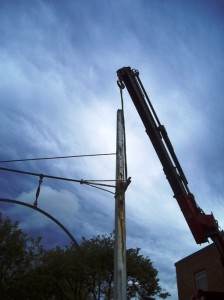 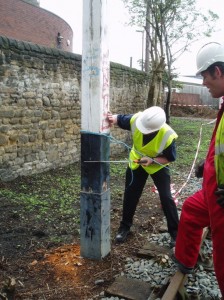 The post was then cut through with a saw. 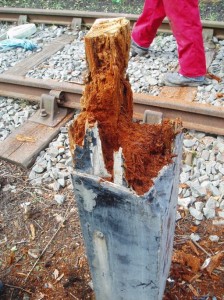 The condition of the post was very bad, much worse than was thought, and therefore, the decision to take it down was fully vindicated.

The loading crane held the post whilst it was cut and then used to load the post onto the lorry. The post has been removed to Monkwearmouth’s sister site, Stephenson Railway Museum in North Shields, where it is intended to remove the iron gauge and its mounts. The ironwork, which also requires a fair amount of conservation work, will be fitted to a new post to be erected as soon as is practicably possible.