The second stage of Kith and Kin: New Glass and Ceramics began at the National Glass Centre on 9th January, where a number of the exhibitors changed or augmented their displays. As the exhibition curators, Prof. Peter Davies and Prof. Kevin Petrie point out, “relationships between family and friends change over time and the same is true of an artist’s relationship to ideas and materials.” The changeover of the exhibition was, therefore, intended to reflect this by allowing the work of participating artists to “evolve” during the course of the exhibition. 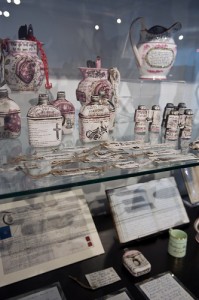 My decision process regarding the development of new work for the changeover was greatly facilitated by a contingent event which occurred early in the first stage of the exhibition. Rather than undertaking a wholesale reorganisation of my cabinet display, I decided to make and add a single porcelain jug in response to an enquiry made by Howard Forster, a visitor to the first part of Kith and Kin. Mr Forster lives in Sunderland and has traced his family tree back to his third great-grandfather, William Crinson (d. 1836), who was indentured as an apprentice potter at Scott’s Southwick Pottery in 1788. Many of the other members of the Crinson family were Sunderland-based potters and Mr Forster’s research corresponds with the items of paper ephemera I displayed from the ‘Scott Archive’ borrowed from Sunderland Museum & Winter Gardens described in my last blog post. For example, William is mentioned as the father of Robert Crinson in the declaration document. Mark Crinson (b. 1841), manager of Rickaby’s Pottery, named on the apprentice indenture, was Mr Forster’s great-grandfather’s brother. A later Robert Crinson (b. 1876), the potter who wrote the letter to the Sunderland Museum in 1969, was his grandfather’s brother. Further research by Mr Forster shows that Robert’s brothers, John Henry Crinson and William Stanley Crinson, served in the Durham Light Infantry during the Great War. William Stanley was injured during the conflict and John Henry was killed in action on 14th September 1916 during the Battle of the Somme. 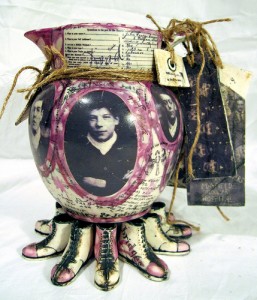 Crinson Jug showing John Henry Crinson who was killed during the Battle of the Somme in 1916, glazed porcelain, ceramic decals, mixed media 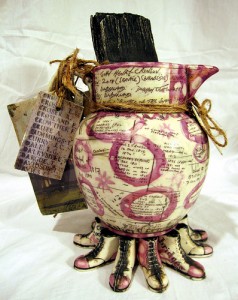 After meeting Mr Forster and viewing the results of his family research accumulated over fifteen years, I decided to make a jug which employed this information to commemorate the Crinson family in ceramic. Much of this research took the form of digitised original documents downloaded from family search websites and the like. The ‘Crinson Jug’ synthesises a variety of this imagery, including photographs, memoirs, military records and a family tree, as printed surface decoration. It is an attempt to materialise and dramatise Mr Forster’s family history, creating a mnemonic focal point for reflection and remembrance. Printed ceramic, perhaps more than any other medium, has the ability to preserve this kind of potentially ephemeral information in an enduring and creative manner, whilst still retaining a certain sense of familiarity conferred by our long association with clay vessels. 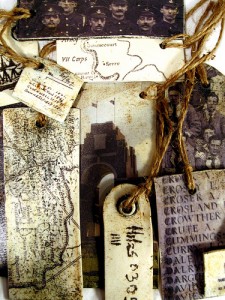 Although the potteries which made the Sunderland pottery in the SMWG’s collection are no more, the descendants of their workers are alive and thriving in Sunderland. The next step is to create a further piece which depicts the three living generations of the Forster family – father, son and grandson. This project, although narrow in scope, provides an ‘organic’ example of small-scale grass roots engagement through creative ceramics practice and perhaps testifies to the enduring relevance of the collection to the kith and kin of contemporary Sunderland. 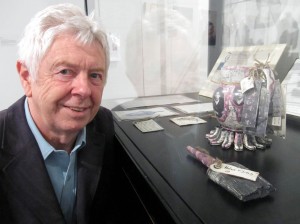 Howard Forster with Crinson Jug at the National Glass Centre

Christopher McHugh is an AHRC Collaborate Doctoral Award PhD student based at the University of Sunderland and Sunderland Museum & Winter Gardens. See more images of the exhibition here.

9 Responses to Kith and Kin: New Glass and Ceramics Stage 2 – The ‘Crinson Jug’