Kith and Kin is an exhibition of new glass and ceramics which opens at the National Glass Centre on 10th November, 2011, 6-8pm. As a Collaborative Doctoral Award student based jointly at the University of Sunderland and Sunderland Museum & Winter Gardens, I have been invited by the curators, Prof. Peter Davies and Prof. Kevin Petrie, to curate a cabinet as part of the exhibition. I am presenting my new ceramic work alongside an arrangement of original Sunderland pottery. Documents from the Southwick Pottery (1788-1897), which I have recently archived as part of my doctoral research at the Museum, will also be displayed. These archive materials serve to give a voice to the people who made the pots while my new work references the original pottery collection, attempting to develop new imagery related to contemporary Sunderland. I have selected objects which address the theme of ‘kith and kin’ on several levels.

I have tried to underline that Sunderland pottery was made by families for use by families. Four generations of the Scott family were involved in the running of the Southwick Pottery and this exhibition displays pottery design notebooks used by Anthony Scott I (1764-1847) and his son, Anthony Scott II (1802-1882).  Similarly, amongst the workers, it can be seen that several generations of the same family often worked in the potteries. The declaration of non-receipt of parochial assistance, dated 1852, shows that Robert Crinson worked for the Scotts for over 35 years, starting in 1817, and that his father was also bound as an apprentice with the Scotts in 1788, continuing till his death in 1836”. A letter to the Sunderland Museum from a later Robert Crinson, aged 94 in 1969, describes how his father, James, and several of his uncles, including Mark Crinson, worked as throwers in Sunderland potteries. Mark Crinson’s indenture, showing that his apprenticeship at Scott’s Southwick Pottery began on 5th May 1858, is also displayed. The later Robert Crinson was also bound as an apprentice thrower at the Old Rickaby Sheepfolds Pottery and, in 1969, wrote:

“I am the last of a family of Great Throwers in the Trade of a Potter and claim to be the last Bound Apprentice In British Isles [sic].”

Many of the items displayed were family heirlooms which were eventually donated to, or acquired by, the SMWG. George Yearl’s pottery painting design book was donated to the Museum by a relative of his grandson, John Haswell.  Beatrice Mary Scott’s birth mug, notably not made, but possibly decorated, in Sunderland,  came from her daughter, Mrs Shaw-Hall, great grand-daughter of Anthony Scott III (1847-1897), while the paper ephemera in the ‘Scott Archive’ was also bequeathed by a Scott descendant.

The pottery displayed is of a commemorative nature, sometimes relating family events to current affairs. For example, Margaret Simpson Thompson’s birth in August 1855 is celebrated alongside the Crimean War (1853-1856) through surface design on her birth mug. The separation of family and friends through conflict is a recurring theme of Sunderland pottery and is demonstrated by the soup dish which depicts the return of a tar to his sweetheart after a voyage. 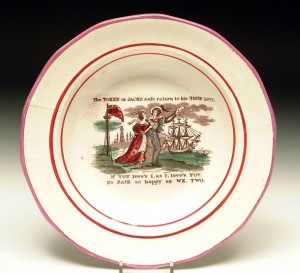 A soup dish made at the Southwick Pottery. Image courtesy of TWAM, 2011

My new work, Time Future is Not and May Never Be, takes the form of an installation of porcelain objects, and borrows some surface designs from the original Sunderland items, serving to establish links between the past and the present. Just as the Sunderland pottery commemorated personal and wider narratives, this new work attempts to show the enduring relevance of much of the original imagery by identifying similar themes in contemporary Sunderland. Some of the imagery comes from interaction with groups connected to Sunderland, ranging from soldiers to writers.

For example, Wearside-born soldiers from Third Battalion, The Rifles (3 Rifles) were approached in order to develop some new work to commemorate their 2009-2010 tour in Helmand, Afghanistan. Techniques derived from the Collections Trust’s Rethinking Museum Collections toolkit and reminiscence training also offered through TWAM were adapted to deliver an object-based reminiscence workshop. Soldiers were asked to talk about significant objects they had used or acquired while in Afghanistan. Notable examples which have inspired work in ceramic include a British Army Prayer Book, a cross, and a paintbrush used to excavate IEDs (Improvised Explosive Devices). The soldiers’ commemorative tattoos  also provide powerful imagery which has been used to develop new surface decoration. 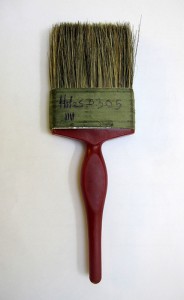 In the cabinet, contemporary ‘relics’ are juxtaposed with old items, forming a ‘shrine’ which aims to both celebrate the city of Sunderland today, while paying homage to the people in the past who used and made its pottery.

There will be an exhibition re-hang in January where I will re-curate the cabinet with more items form Sunderland Museum & Winter Gardens as well as more of my creative work. 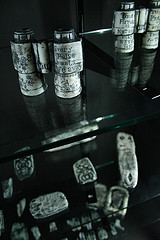 Detail of 'The Heart of Jack Crawford: A Shrine to Unsung Heroes', a Gallery of Wonder exhibition at the Great North Museum: Hancock, by Christopher McHugh, June 2011, Photo: Irene Brown, 2011

Kith and Kin: New Glass and Ceramics, curated by Prof. Peter Davies and Prof. Kevin Petrie, runs from 11 November 2011 to 12 February 2012 at the National Glass Centre, University of Sunderland.

7 Responses to Kith and Kin