It is time for me to post again about the Sunderland-built barque Lota. There has been a surprising volume of traffic in response to the original posting. I am amazed at how our shared knowledge of the ship, her voyages and her crew has increased as a result. 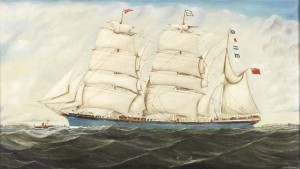 “On Wednesday there was successfully launched from Messrs Robert Thompson & Sons’ Southwick yard, Sunderland a handsomely-modelled steel barque, built to the order of Messrs Turner, Edwards and Co. of Bristol, of the following dimensions:- Length, 232 feet; breadth, 37 feet, depth to floors 21 feet 10 ½ inches, gross tonnage about 1,367 tons. The vessel has raised quarter-deck aft, 48 feet, for the accommodation of captain, officers, and passengers, also rooms for apprentices. Amidships is the large and spacious house for crew, petty officers, galley etc. Under the topgallant forecastle are lamp and oil rooms, patent windlass etc., lighthouses are on the after part of the forecastle head, patent pumps amidships, and fire engines forward. Everything is fitted with the latest improvements. During construction the vessel has been superintended by Captain Langford, who takes command when completed. As the vessel left the ways she was christened the Lota by Miss March of London.”

Back in December 2011 Peter Robinson commented that he had come across the blog while researching a caption for the photograph collection of the Cumbrian Railways Association. The research was for a photograph of Lota moored at Carrs Quay, Silloth, which Peter has kindly given me permission to show here. 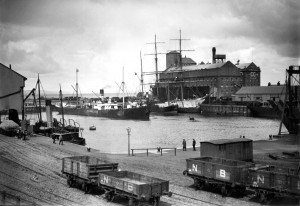 I am pretty sure that this is the Sunderland-built Lota but while I was checking the possibilities I came across another near contemporary 3-masted steel barque of the same name. She was built at Port Glasgow in 1893 by Archibald Russell & Co. and apart from being 13 feet longer than ‘our’ Lota is likely to look very like her. So when researching you should be aware that there were two very similar Lotas trading from 1893 to 1910, after which the Clyde-built ship disappears from the register. 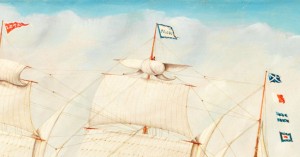 Something I didn’t comment on when I first posted was the peculiar flag which is being flown from Lota’s mainmast . Since the original owners were Turner Edwards of Bristol, one would expect to see their house flag of a white star on a red background flying from the masthead. Instead there is flag carrying the very clear message A1.JH! It seems that John Hudson, who painted the picture, was probably having a little joke by pairing his initials with the top Lloyds insurance classification. He definitely wasn’t expecting to sell the painting to Lota’s owners.

Finally may I say thank you to everybody who has posted. I have greatly enjoyed learning more about one of the last of the Sunderland-built sailing ships.