This idyllic scene by Thomas Miles Richardson senior (1784–1848) shows the dell that opened out near Barras Bridge, Newcastle to become Pandon Dean. 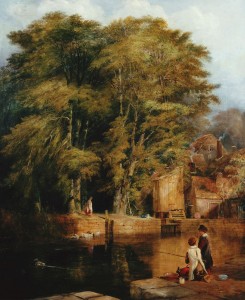 Although Pandon Dean disappeared long ago, it was known for its beauty in the 18th and early 19th centuries. A song published in 1776, under the name of Rosalinda (republished in 1812 by John Bell of Newcastle) described the loveliness of Pandon Burn and Pandon Dean (sometimes spelled Pandon Dene):

Above me stand the towering trees,   While here I feel the gentle breeze;   The water flows by chance around,   And green enamels all the ground,    Which gives new splendour to the scene,    And adds a grace to Pandon Dene.

The lush green trees, golden sunlight and shining reflections on the water in Thomas Miles Richardson’s painting reveal the dean’s appeal. Richardson composed his picture to include picturesque buildings and children fishing, creating an image of people living in harmony with nature.

Some other early-19th-century artists expressed a similar Romantic feeling for the landscape surroundings of their homes. John Constable, who painted Suffolk landscape, is the best known of these artists. Francis Danby also painted comparable views inspired by the beautiful Bristol countryside. 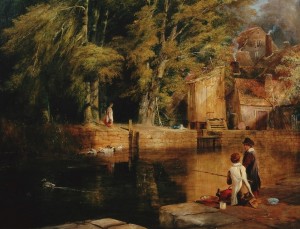 There is a possibility that Thomas Miles Richardson was influenced by Constable’s paintings. Richardson was in London in August 1822, when he painted a view of George IV setting off for a visit to Scotland. It was exhibited in Newcastle in 1826, and is thought to be this watercolour.

Richardson’s painting isn’t dated, and it wasn’t exhibited in the artist’s lifetime – only in a memorial display in 1848. However, it may have been painted in the mid-1820s, when the artist exhibited two similar pictures, of approximately the same size, showing children fishing.

It seems likely that Richardson’s Young Anglers, Barras Bridge shows the Barras Mill-pond as it was before redevelopment in about 1819, even though it was probably painted a little later as a recollection of past times. The picture shows a wide sheet of water (not a narrow stream as Pandon Burn was), and the sides are stone, as would be likely for a pond built to feed a watermill. (Ponds ensured there was always enough water to create a fast-flowing mill stream to turn the water-wheel.) 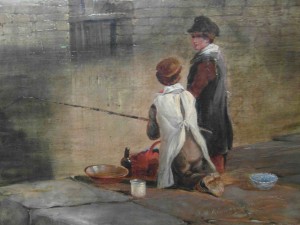 Children fishing, detail from 'Young Anglers, Barras Bridge'. The children are equipped with bowls for bait and the minnows they hope to catch.

Like the children in the painting, the Newcastle antiquarian the Reverend J Collingwood Bruce (1806-1892) had spent boyhood hours at Barras Mill-pond and the burn. In a book of about 1870, he wrote:

The writer has often, when a boy, sailed his boats in the pond, and fished for minnows in the upper part of the stream.

So, where was the attractive scene shown by Thomas Miles Richardson located? The Barras Mill-pond and burn alongside were built over in the early 19th century. The photo below shows their approximate site today – in the paved area (Eldon Place) between the two Newcastle University buildings in the photo below, over the main road from the Civic Centre. 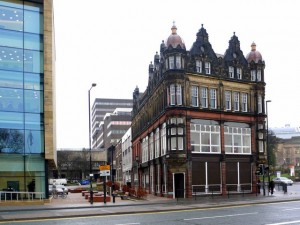 Ralph Beilby’s map of 1788 shows the mill-pond and burn in existence (top left of the map detail). 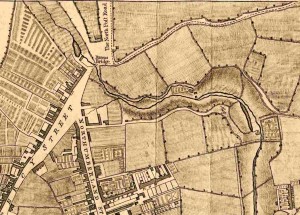 The North Post Road at the top of this map detail is today’s Great North Road. The road further left of this later developed into Claremont Road. The dark rectangle on the tongue of land between the two roads is St James’s Place, which was knocked down to build the museum that became the Great North Museum: Hancock. The burn with the mill-pond is to the left of that. The stream runs past Barras Mill, shown as a dark rectangle, and a path from the left side of the mill leads to the Barras Bridge. The stream here was known as Bailey (or Baillie) Burn in the 18th and early 19thcenturies. After flowing under the old Barras Bridge, the stream continued into Pandon Dean, which is shown opening up into a huge valley on the right of the map. 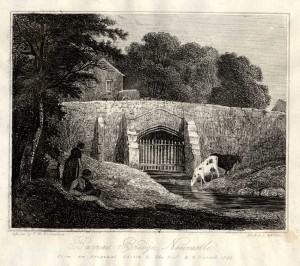 The stream at old Barras Bridge in 1788, from a drawing by the Reverend WN Darnell

We know that, in the late-18th century, the stream at Barras Bridge was narrow, unlike the pool shown in Thomas Miles Richardson’s painting. It probably stayed much the same in the next 30 years, though the bridge was widened and heightened in both 1789 and 1819 to make it safer for travellers. Unfortunately, we don’t have a later image of the bridge.

After development of the Barras Mill-pond and the burn in this area in about 1819, a pool appeared on the east side of Barras Bridge. However, from Thomas Oliver’s map (below), it looks like it formed naturally following culverting of the burn on the other side of the bridge, and the pool here seems unlikely to have stone sides. 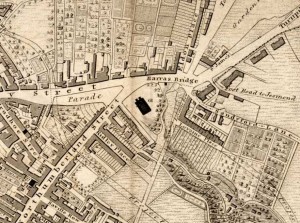 Detail from Thomas Oliver's map of 1833

Considerable changes took place in the early 19th century. Eneas Mackenzie, in his History of Newcastle of 1827 tells us that, as the result of alterations taking place about the same time as the widening of Barras Bridge in 1819:

the Bailey Burn is now arched over, the mill-pond filled up, the inequalities levelled, and the whole converted into gardens, which are attached to a neat row of airy houses, called Eldon Place. … The ancient mill is also to be pulled down… 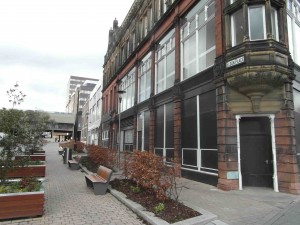 Entrance to Eldon Place from Percy Street/Barras Bridge. Claremont Buildings of 1896 are on the right. 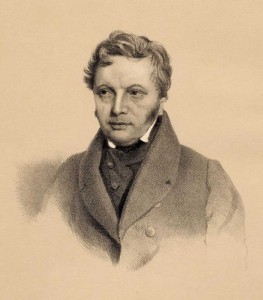 Thomas Miles Richardson (1784-1848) was the leading artist in Newcastle in the early 19th century, and painted many local views.  He taught several other artists, and he also set up artists’ societies and exhibiting organisations. He exhibited his paintings in London and all round the country, as well as in Newcastle.

It’s not known if Richardson visited London (apart from the 1822 visit) to accompany pictures he showed at the Royal Academy and British Institution exhibitions (his son Henry Burdon Richardson exhibited at the RA from London addresses 1828-1832, so Thomas Miles Richardson might have visited).

The date of Richardson’s painting of Young Anglers, Barras Bridge is uncertain. On the back of the picture, the artist’s address is written as 53 Blackett Street, where he worked in the 1840s (probably from 1837 when his son Thomas Miles Richardson junior started using this address).  However, the picture might date from the mid 1820s – Richardson exhibited two similar subjects at the British Institution – Minnow Fishers, a view near Newcastle, in 1825, and The Young Angler…Jesmond Dean in 1826 – for both, the listings give measurements very close to the frame size of Young Anglers, Barras Bridge. 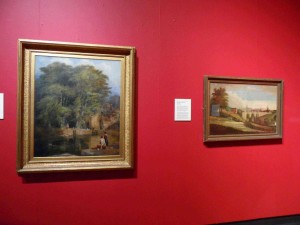 Paintings of Pandon Dean on display

This snap shows Thomas Miles Richardson’s painting of Young Anglers, Barras Bridge alongside another painting of Pandon Dean. They are on display until May 6th 2012 in the exhibition ‘19th Century Art in Newcastle’, selected from the Laing Art Gallery collection, until April 29th 2012.

Another of Thomas Miles Richardson’s paintings – Excavations for High Level Bridge – is on show in the Northern Spirit displays on the ground floor of the Laing Art Gallery.