Worshipping Mithras in the Roman Empire. A guest post by Flora M. Kirk

My name is Flora Kirk. I am an Ancient Studies undergraduate student at the University of Maryland, Baltimore (USA). I have been on a Roman Society placement at the Great North Museum: Hancock for the past few weeks. I hope you enjoy my blog!

The Romans were not limited to the Greek pantheon in their worship, especially during the Empire. The imperial era saw an influx of eastern gods enter Roman daily life, including the Greco-Egyptian Serapis, and the introduction of the Syrian Sol Invictus under Elagabalus. However, while these deities had a fairly popular following, they do not compare to the cult that sprung up around the Persian creator god/sun-god, Mithras.

By the beginning of the 2nd century Mithras’ influence spread rapidly throughout the empire. Evidence of his following has been found from Dura Europa in the East, to Hadrian’s Wall in the West. His age is a matter of debate, though historians have identified gods as old as 1500 BC that could be early forms. Regardless, archaeological evidence tells us Mithraism began in Rome around AD 98-99 and stayed until the end of the fourth century. It was a male-only cult that particularly attracted the military. Mithras had all the qualities of a good soldier and his cult involved strict discipline. He was also popular among merchants, who worshipped him as a god of Contract and Truth. In fact, his followers were known as syndexioi, those “united by the handshake”; in the Persian tradition, an agreement sealed with shaking right hands was legally contractual. 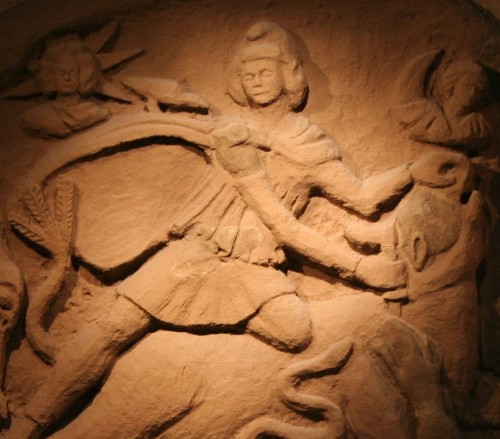 Because Mithraism was a mystery religion, much of their rituals and beliefs have been lost in history. However, archaeological finds have been able to fill in some of the gaps. The most informative finds have usually been found in recovered temples to Mithras, known as Mithraea (singular mithraeum). Usually underground, they were either an adapted natural cavern, or a building imitating a cave; when possible, the Mithraeum was constructed within or below an existing building. The room was long and narrow with benches on either side. At the back was a recess, where a pedestal alter would be. This apse is where archaeologists have found several depictions of Mithras. He is usually shown wearing a red Phrygian cap and cape, sometimes with a halo of sun rays. He is most often depicted in the processes of sacrificing a bull, known as ‘tauroctony’. No one knows the true meaning of the tauroctony, except that it is usually accompanied with moon and stars, signalling an astrological connotation. 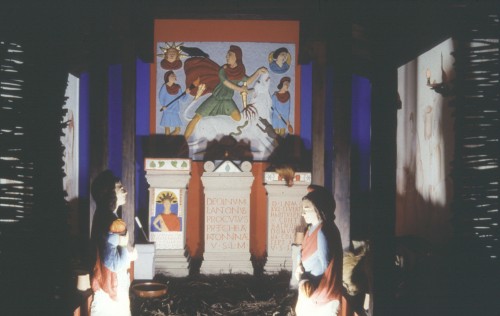 Reconstruction of the Mithraeum at Carrawburgh on Hadrian’s Wall.

Several mithraea have been found in forts along Hadrian’s Wall, including Rudchester, Housesteads, and Carrawburgh, demonstrating the importance of Mithras to the garrisons. These shrines have yielded artefacts revealing how Mithras was worshipped in the North, several of which are on display in the Great North Museum: Hancock today. Carrawburgh Mithraeum is a particularly bountiful site, as it was flooded by an encroaching bog. The oxygen-lacking environment preserved the organic remains left in the abandoned temple, including a bowl of Mediterranean pine-cones, and wattle-and-daub seats. The origin of the pine-cones indicates that they had been brought over specifically for rituals.

A selection of Carrawburgh finds are on display. These include a portion of the wattle and daub, made by a woven lattice of wooden strips being daubed with a sticky material (usually made of some combination of wet soil, clay, sand, animal dung and straw). Below is an iron shovel which would have been used by Lion-grade members to tend the sacred flame.

Also found in Carrawburgh, a Samian ware moratorium decorated with lions might tells us that the soldiers also followed the Mithraic degrees of initiation. The levels were as such, in ascending order: Raven, Bridegroom, Soldier, Lion, Persian, Sun-runner, and Father. As this was a mystery cult passed orally, not much is known of the degrees, except that they are mentioned on inscriptions outside mithraea and sometimes appear in decorations. 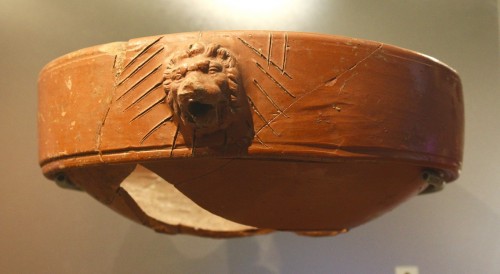 Samian ware moratorium decorated with a lion motif. Most likely used in ritual libations by members of the Lion class.

While Mithras is usually depicted in the tauroctony, Housesteads’ mithraeum displayed a more unusual image: Mithras being born out of the cosmic egg. It shows Mithras emerging from an egg, rising naked from the lower part of an eggshell while the upper half of the shell caps his head; surrounding him is an egg-shaped zodiac representing the cosmos. Several elements make the sculpture unique. First, in birth scenes, Mithras usually springs from a rock. The egg-birth and surrounding signs of the zodiac show that at Housesteads he has been fused with other gods: the Orphic Phanes, born from an egg as first ruler and creator of all, and Aion, god of time, usually depicted as a youth standing in a wheel bearing the signs of the zodiac. Secondly, the altars found in the temple were dedicated to Mithras Saecularis – ‘Mithras, Lord of this Age’. This combination of gods and concepts must have seemed particularly powerful. The fact that it is found nowhere else also shows that someone with extensive learning and advanced religious and philosophical ideas led the Mithraic cult at Housesteads. 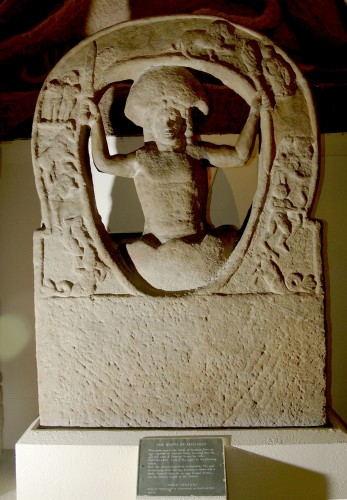 Mithras being born from the Cosmic Egg.

Signs of Mithraism have also been found in Londinium, the city of modern day London. In 1954, a mithraeum was discovered under Walbrook street, revealing a collection of god statues, including Mithras, Minerva and Serapis. Despite the additional gods, the temple layout, along with the found food and materials, point to it being a mithraeum shared by a few other deities. It is suggested that the statue heads were buried reverently as the temple was turned to a temple to Bacchus in the 4th century. Until August 27 2017, the heads of Minerva, Serapis and Mithras can be seen at the Great North Museum: Hancock.

Serapis from the Walbrook Mithraeum. © Museum of London. 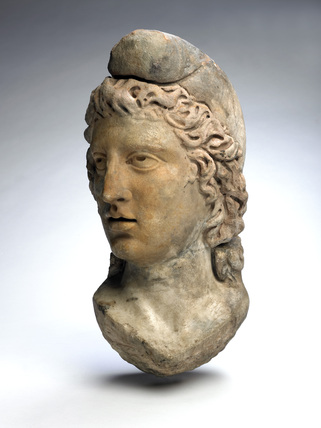 Mithras from the Walbrook Mithraeum. © Museum of London.

2 Responses to Worshipping Mithras in the Roman Empire. A guest post by Flora M. Kirk