As part of our Wor Life project, commemorating the role of the North East in the First World War, we have been involving schools, families and community groups in creating poppies in our venues.  The poppies have been interpreted differently by each venue and each individual and the results have been wonderful!

We hope that creating the poppies was not only an outlet for people’s creativity, but also a chance to reflect on those who fought, worked or were affected by the War. The project started in July 2014 and on Remembrance Day last year the poppies were displayed at each venue.  We will display the poppies every November until 2018, adding to them as we go.

The Laing Art Gallery worked with schools, visitors and community groups to create over 1300 poppies. The schools they worked with went on to do projects inspired by their work, including research into their own family histories. On Remembrance Day there was an event for groups to come along and see their poppies on display whilst remembering the soldiers who gave their lives for us.

There was even an article in the Evening Chronicle about the visit! http://www.chroniclelive.co.uk/news/north-east-news/washington-children-helped-create-hundreds-8091980 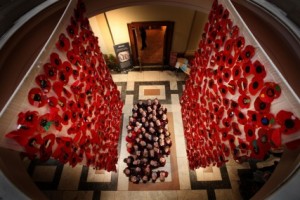 Poppies at the Laing Art Gallery 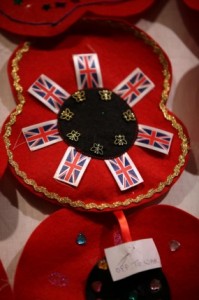 Close-up of Poppy at the Laing

The Hatton Gallery worked with all ages, from very young children to people whose parents fought in the First World War. They also ran a project to make glass poppies with community groups, which were placed alongside the fabric creations to make a stunning and poignant display.

Members of the Learning Team in North and South Tyneside took the poppies out to local schools for them to decorate and return to the museum.  There were also a few Family Fun events where families worked with artists to decorate poppies to add to the display.  They will be displayed in 2018.

Sunderland Museum’s Learning Team have been working with craft groups, such as the Crochet and Knitting Guild, as well as visiting many community events to work with people of all ages and abilities.  They created a carpet of poppies made of different materials in the entrance to the museum, which was quite a talking point for visitors!

Discovery Museum used their undecorated poppy shapes as inspiration to encourage remembrance.  The Learning team was moved by stories of children who have lost parents in recent wars as well as stories of their ancestors in the First World War. The poppies were displayed next to the Turbinia in the museum and stayed there over the Remembrance period for people to add their memories and thoughts to. 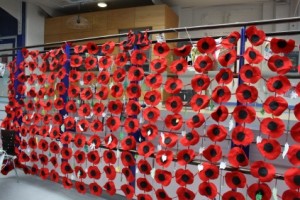 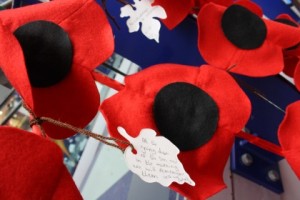 Close-up of poppy at Discovery