Wonder Woman and the Amazons

The recent release of the film Wonder Woman has raised interest in Amazons, fearless warrior women, who were more than capable of taking on their male equivalents in combat. Wonder Woman herself is an Amazon brought up on the island of Themyscira, where she trains to become a fierce and skilled warrior.

Stories of Amazons originated with the Ancient Greeks who told tales about their encounters with these fierce warrior women. The Fifth Century BC historian Herodotus, for example, described the customs of the nomadic peoples, such as the Scythians and Sarmatians, who lived in the Black Sea region and who included female warriors among their number. However Herodotus confessed that he was only recording what he had been told and that he had never actually met any Amazons.

It was commonly thought that the Greek stories about Amazons were mythical and had no basis in fact. Amazons represented everything that Greek women were not. They fought alongside and against men and were proudly independent, whereas Greek women were expected to stay at home, carry out domestic tasks and obey their husbands. The Greeks frequently portrayed Amazons, especially on their painted pottery  and we can learn something of Greek attitudes towards them from these images.

An Athenian red-figure pot (pelike) dating from 420 – 390 BC on display in the Great North Museum represents a Greek warrior and companion in combat with an Amazon. The Amazon is dressed in eastern clothing and resembles a Persian, while the Greek is naked. A deliberate contrast is being made between the two with the Amazon being linked to the Persians who frequently came into conflict with the Greeks and in fact invaded Greece on two separate occasions. 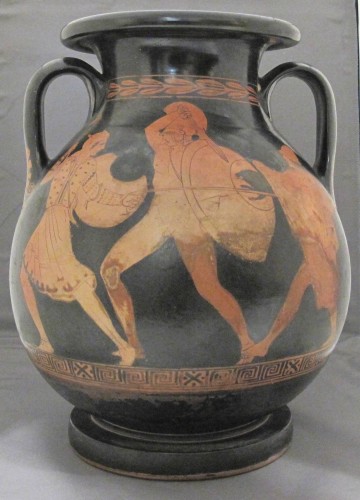 The red-figure pelike (pot for storing liquids) showing an Amazon in combat with a Greek soldier. 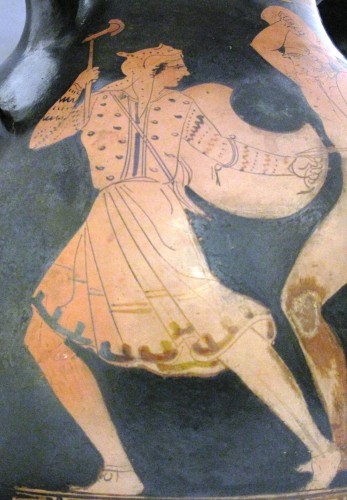 Amazon from the pelike in the Great North Museum wearing distinctive Persian style dress. This includes an elaborately decorated tunic, trousers, a soft Persian hat and a crescent-shaped shield.

The Amazons came to represent everything that was alien and hostile to the Greek way of life and were frequently associated with the Persians as outsiders with barbaric habits like wearing trousers! Often the architects of Greek temples would include sculptures of Greeks fighting Amazons as part of the decoration of the temple.  Worshippers would then be able to see representations of these warrior women who stood against all the values the Greeks held dear. 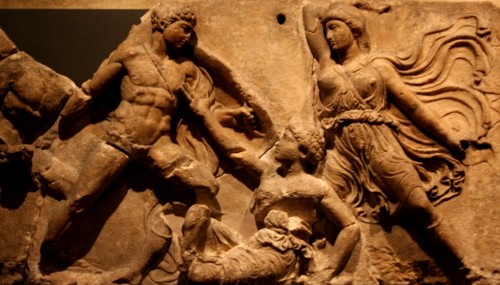 Greek fighting Amazons from the frieze of the temple of Apollo at Bassai.

For a long time the Amazons were regarded as mythical characters like the Centaurs or Giants who appealed to the Greeks as subject matter for their mythological tales. However this idea has been challenged by the increasing evidence of burials of warrior women from the steppe lands around the Black Sea.  Several female burials, dating from a period when the Greeks were establishing colonies on the Black Sea coast, have been discovered with evidence that their occupants were in all probability warriors.  Grave goods have included weapons such as swords, daggers bows and other military equipment.  In addition some of the skeletons show signs of combat injuries while many are bow-legged from riding horseback on a regular basis.  It seems that the nomad societies on the fringes of the Greek World were more egalitarian than the city-dwelling Greeks and women were able to participate in horse riding and combat alongside their menfolk.

It is surprising how many parallels can be found between Amazons represented in Ancient Greek Art and the DC comic book heroine.  Some Amazons, for example, are portrayed using lassos to capture Greek warriors, in a similar way to Wonder Woman’s lasso of truth.  The evidence of archaeology now suggests that such warrior women, equipped with axes, bows, swords or indeed lassos, were a reality for Greeks living near the Black sea.   Maybe the Greek inspiration behind the Wonder Woman stories is based on real life Amazons after all.

One Response to Wonder Woman and the Amazons