The Hadrian’s Wall Path National Trail has become a hugely popular route for walkers who want to experience this unique historical feature while also taking on board plenty of exercise and Northumbrian fresh air.

The Trail was first opened in 2003 but prior to this date a number of people have visited the Wall and provided accounts of their experiences. One of the most interesting characters to have undertaken the journey is William Hutton, who is generally believed to be the first person in modern times to walk the entire length of Hadrian’s Wall. Hutton was a poet and historian born in Derby in 1723 who lived most of his life in Birmingham. 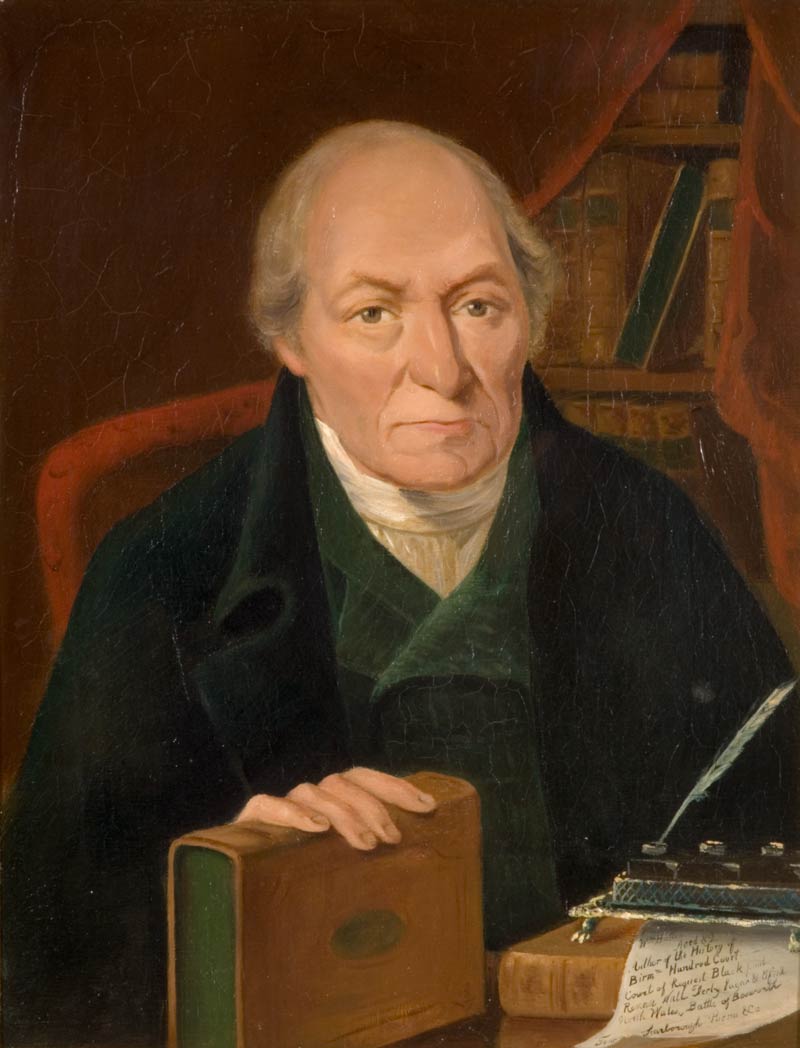 Portrait of William Hutton – About 1780.

He produced an account of his journey in the book “The History of the Roman Wall” which was published in 1802. A first edition of this work is available in the collection of the Society of Antiquaries of Newcastle Upon Tyne’s collection that is located in the Great North Museum: Hancock Library. In fact Hutton covered a distance of 601 miles from his home in Birmingham, crossing the Wall from west to east, and then retracing his steps back to his home City.   It should also be added that Hutton made this journey on foot at the age of 78.  His daughter accompanied him on his expedition to the North, riding on a horse behind her servant, Hutton however refused any such luxury and gamely covered the ground on foot, fording streams and occasionally sleeping under bushes.

In the preface to his book he makes the following statement that has obviously proved to be an unfortunate error of judgement of the lure of the Wall to intrepid walkers in the future.

“Perhaps, I am the first man that ever travelled the whole length of this Wall, and probably the last that ever will attempt it. Who then will say, he has, like me, travelled it twice” 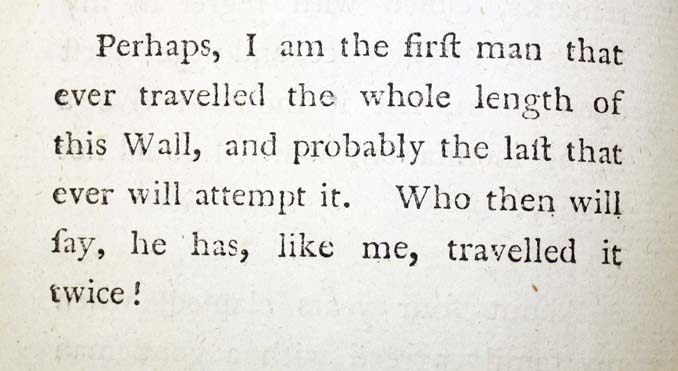 Hutton’s book contains a contemporary historical account of the Wall, but also includes his musings on what befell him on his travels revealing that he was a man with keen sense of humour and a perceptive social observer.   He dryly states “What can exceed the folly of that man, who at seventy-eight, walked six hundred miles to see a shattered Wall!” 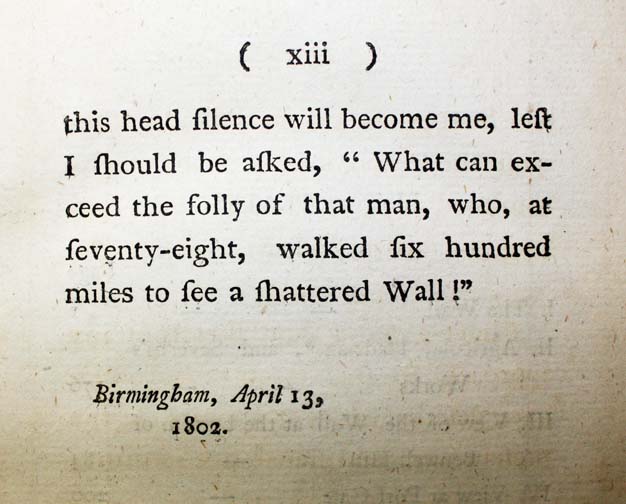 The book includes a number of illustrations including this wonderful image of an apple tree growing on top of the Wall at Benwell Hill. 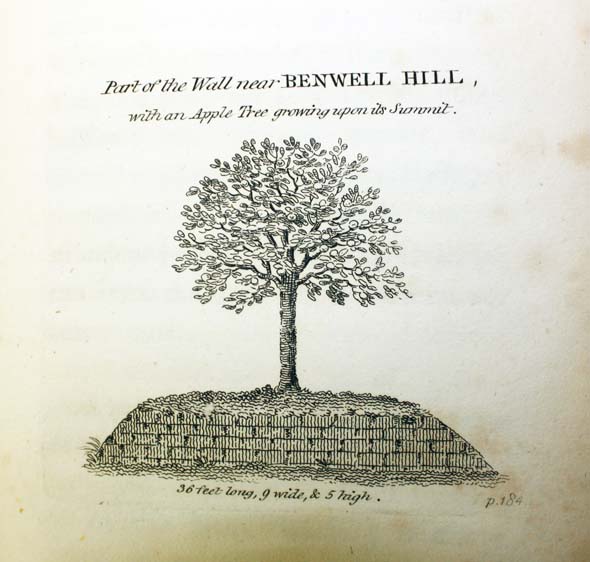 The book also contains fascinating details of the places that he stayed in and the kind of hospitality that he encountered.

“Although a public house, they had no ale, cyder, porter, beer or liquors, of any kind, or food, except milk which was excellent; but they treated me with something preferable, civility. When I rose the next morning and asked my worthy landlady what I had to pay I found she would be satisfied with only a few pence!” 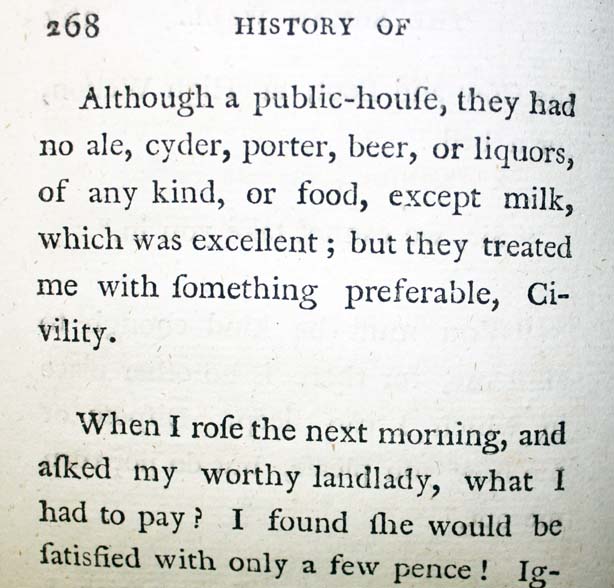 Hutton kept a journal of the places that he visited, and the miles he had walked each day, beginning on 4 July and ending on 7 August 1801. As you can see from the following entries he covered up to 28 miles a day without the benefit of modern day light weight clothing and boots. 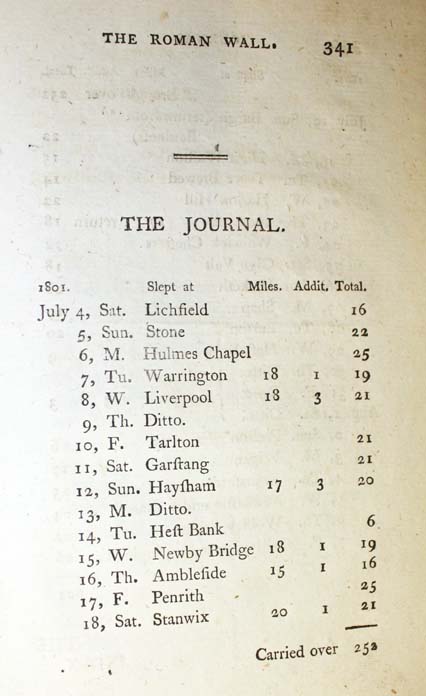 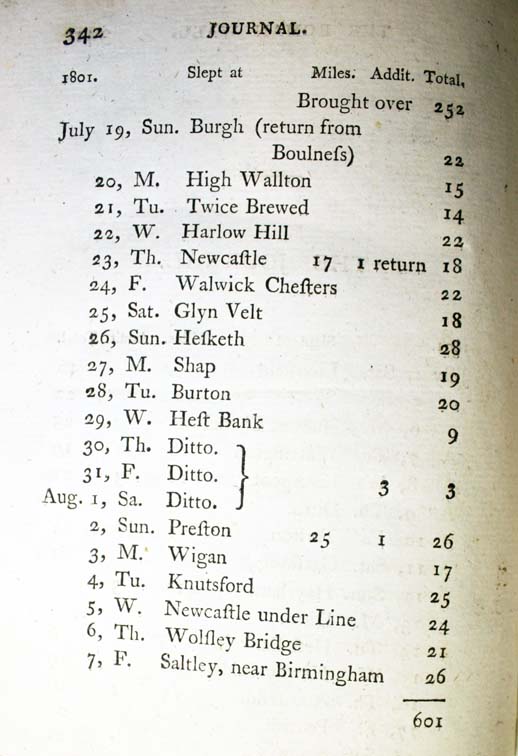 Towards the end of the account of his experiences Hutton  reflected on the end of his long and rewarding  journey.

“By easy marches I arrived at Birmingham, Aug 7, 1801; after a loss, by perspiration, of one stone of animal weight; an expenditure of forty guineas, a lapse of thirty-five days and a walk of six hundred and one miles”

Hutton never returned to Hadrian’s Wall and died in Birmingham at the ripe old age of 91.

Next time you are on Hadrian’s Wall remember to spare a thought for William Hutton and his pioneering early 19th century epic perambulation.

The Great North Museum: Hancock Library has a wide range of wonderful books on Hadrian’s Wall and Roman Britain that are free for anyone to view.  We’d be delighted to see you if you would like to pay us a visit.