Who do you think you are?

Like millions of other people we love the BBC programme Who Do You Think You Are? and we’re particularly interested when the celebrity involved has north east connections.

We’ve only actually featured in one programme – the one on Jodie Kidd but we’ve helped out with a few others either by helping the production company’s researchers or by them commissioning research from us.

A common complaint about the programme from archivists is that it makes the process of tracing your family history look too quick and easy, but helping out behind the scenes shows just how much work is put in before filming even starts.

We recently did some research for the programme on comedian Alan Carr, whose father’s family is from the north east. In the end the programme focussed on Alan’s mother’s family, one of whom was a deserter in the First World War, and our research wasn’t used at all but it’s still an interesting story.

One of Alan’s forebears, John Carr, together with his son Samuel, was killed in a colliery disaster at Burradon on 3 March 1860 along with 74 other men and boys. John Carr had been active in a movement to set up a Miners Provident Association to set up a relief fund for the victims of colliery accidents, but this was not to be established until the Northumberland and Durham Miners Permanent Relief Fund was set up in 1862 in the aftermath of the Hartley disaster. Instead a charitable fund was set up by the Newcastle Daily Chronicle. 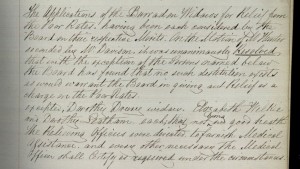 We were asked to research the records of the Tynemouth Poor Law Union, which covered Burradon, to see whether they had supported any of the victims’ families, and in particular John Carr’s widow Dorothy and her six children. We found that they had not, and in fact had only allowed three widows relief from payment of rates on grounds of ill health. The board unanimously resolved “that no such destitution exists as would warrant the board giving out relief as a charge on the poor rates”. It would be interesting to know if the people of Burradon agreed……

One Response to Who do you think you are?