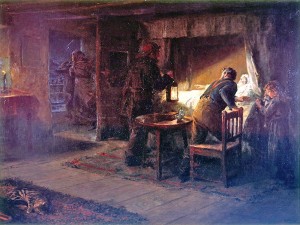 There’s a big drama going on in this painting – Go, and God’s will be done! The cat on the left is sleeping peacefully in front of a fire, while behind her is a scene of wild activity.

This great melodrama is hard to follow unless you’ve got some background.

Go, and God’s will be done! illustrates a poem The lifeboat, by George Roberts Simms’s, which was published in The Lifeboat and other poems in 1883. The poem was quoted in the exhibition catalogues when Ralph Hedley exhibited the painting  in 1891 and 1892, in Newcastle, Liverpool, Leeds, and South Shields, and in the Royal Academy.

It shows a dramatic moment when a life-boatman is summoned to a wreck that can (just) be seen out of the open door.

I didn’t move, but pointed to the white face on the bed-

I cannot go and leave her to die in the night alone.”

As I spoke Ben raised the lantern, and the light on my wife was thrown;

And I saw her eyes fix strangely with a pleading look on me,

While a tremblin’ finger pointed through the door to the ragin’ sea,

Then she beckoned me near and whispered “Go, and God’s will be done!

For every lad on that ship, John, is some poor mother‘s son”.

The painter was the Newcastle artist Ralph Hedley. He had been criticised a year before for being un-poetic, and this painting was meant to silence his critics.

The painting is now in the collection at Harris Museum and Art Gallery, Preston, and a group of volunteers at the Laing Art Gallery, Newcastle, have fond sketches for the painting among records given to the gallery by Ralph Hedley’s descendent Julian Brown. 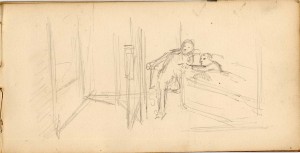 There are sketches in two of Ralph Hedley’s sketchbooks. The first sketch shows an early idea for the composition, with the bed seen from the bottom rather that the top end.

– this double page of studies for the figure and the bed covers – and these two sketches. 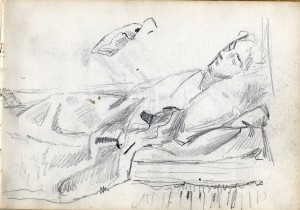 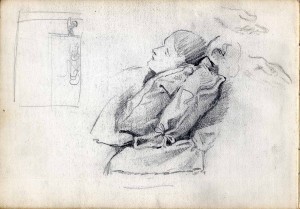 In his autobiography George Sims tells how his friends teased him about his poem.

In a Drury Lane drama by my friend and collaborator, Henry Pettitt, one of the characters was always endeavouring to recite “The Lifeboat,” and being sternly suppressed by everybody within hearing distance.

“I will now recite ‘The Lifeboat,’” was his gag wheeze, and the usual reply was “Oh, ‘The Lifeboat’ be hanged!”

The gentleman who wished “The Lifeboat” that fate had his wish gratified. “The Lifeboat” was hanged, or rather hung. A well-known painter selected it as the subject of his Academy picture, and it was hung – on the line.

Hung ‘on the line’ – means that a picture is hung at eye level – not hung too high (skyed) or too low (floored).

The story of The Lifeboat ended happily. The husband went with the lifeboat and helped to save the crew of the wrecked ship. One of them was his long-lost son, and when took him home, his mother was overjoyed and recovered from her illness.