What ever happened to Saltwell Park Museum? (Part 3) 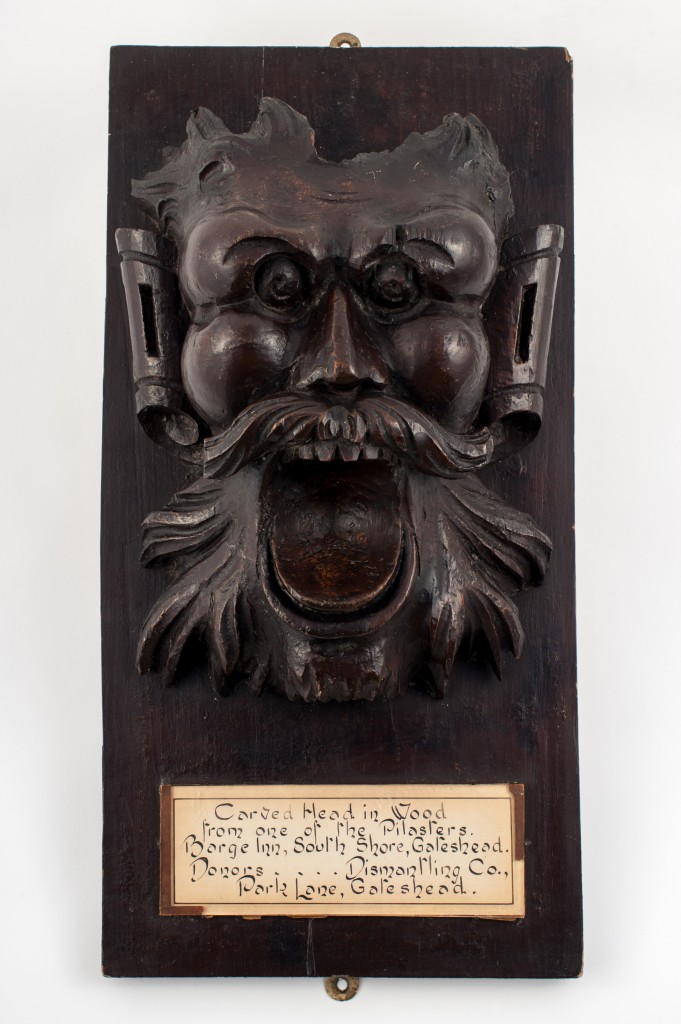 Carved Head in Wood, from one of pilasters of Barge Inn, South Shore, Gateshead. Donated to the museum from a ‘dismantling company’ in 1934. Photo Credit: Karolina Maciagowska

Here are excerpts from an article from the Newcastle Courant on 10 July, 1933 recording the opening of Gateshead’s Local & Industrial Museum (later to be officially called Saltwell Park Museum). The article has the headline ‘SPREADING THE LIGHT OF KNOWLEDGE.’

Councillor Thomas Smith, who presided, said a borough of the importance and historical interest of Gateshead certainly ought to have a museum of its own, and the Parks Committees decided to do the thing thoroughly.

“Some of you” he added “may have an idea that in these hard times it is rather an expensive luxury to undertake. I want to make this quite clear that this new venture has been established and will be continued at very little cost to the town.”

“The wonderful history of our town will duly be recorded here. The children will have access, and lectures on botany, bird life and natural history, and industrial progress are being arranged for them.”

“I’ve been inundated with offers of exhibits by firms and private individuals who are interested in Gateshead. There has been talk recently about the borough being overlooked, but we are going to see that doesn’t happen again, and that our people are provided with all the amenities and facilities that the times can afford.” 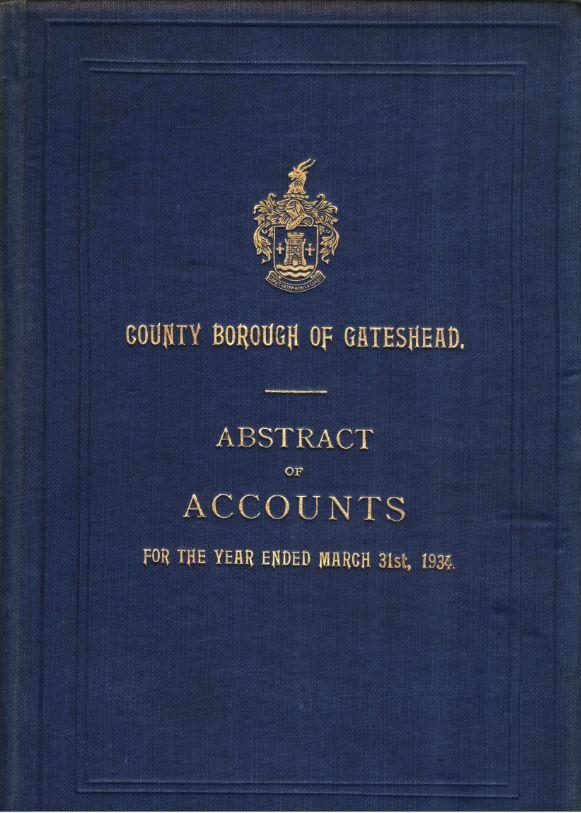 Saltwell Towers, where the museum was based, had dry rot and a serious damp problem that was first identified in 1932. It never really got fixed and was obviously only superficially resolved for the opening a year later. The condition of building gradually declined across the next 30 years and fell into disrepair; gradually the rooms that held the exhibits were systematically closed, due to a fear that the ceilings would collapse on people. In February 1969 the decision was made to close the museum and a new home would be found for the collection. When you read the Gateshead Borough Council annual accounts report from 1969 there is only a line or two about the closure. 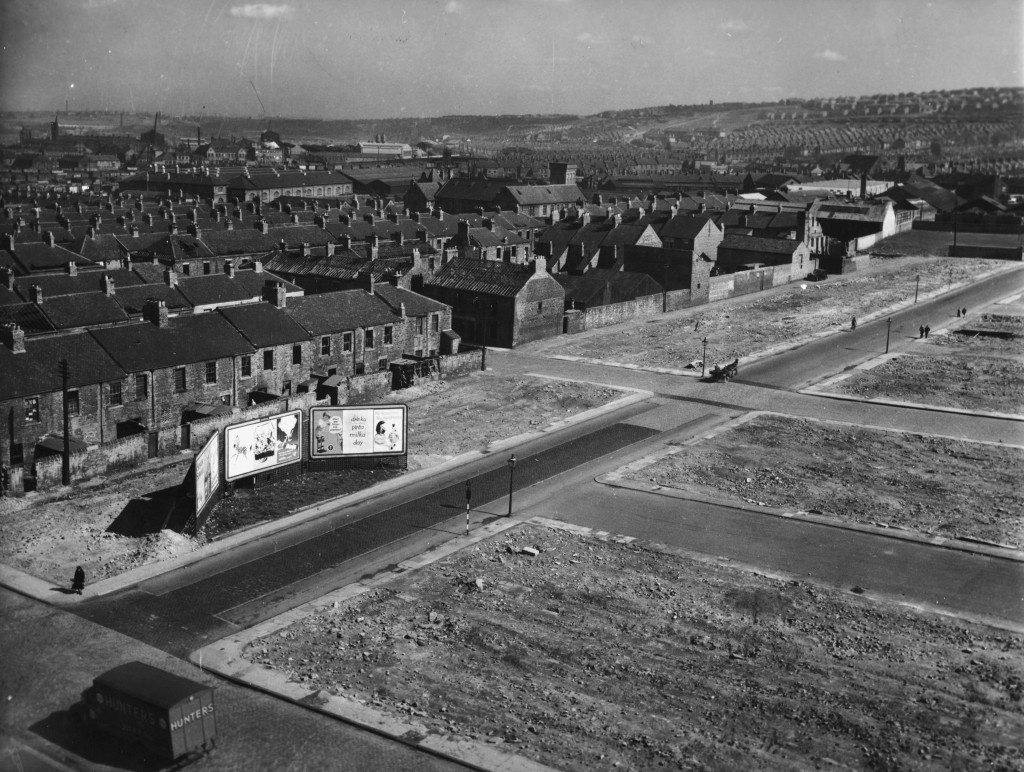 It is important to remember what was also going on in Gateshead (and Newcastle) at this time. There was demolition and redevelopment on a massive scale, architecture and town planning was transforming the area. Huge high rise flats, fly overs, motorways and multi-storey car parks were being built, in a style that we now call Brutalist. People were trying to make the world a better place. Town planners and local authorities wanted to eradicate what they saw as a society trapped in the pre-war period – a period of ‘slum landlords’, outdoor toilets, poor health, poor housing and no welfare state. They wanted to transform an infrastructure and society that was, in their minds, ill equipped for the late 20th century. It was an ambitious and benevolent project that was not concerned with the past but the future. 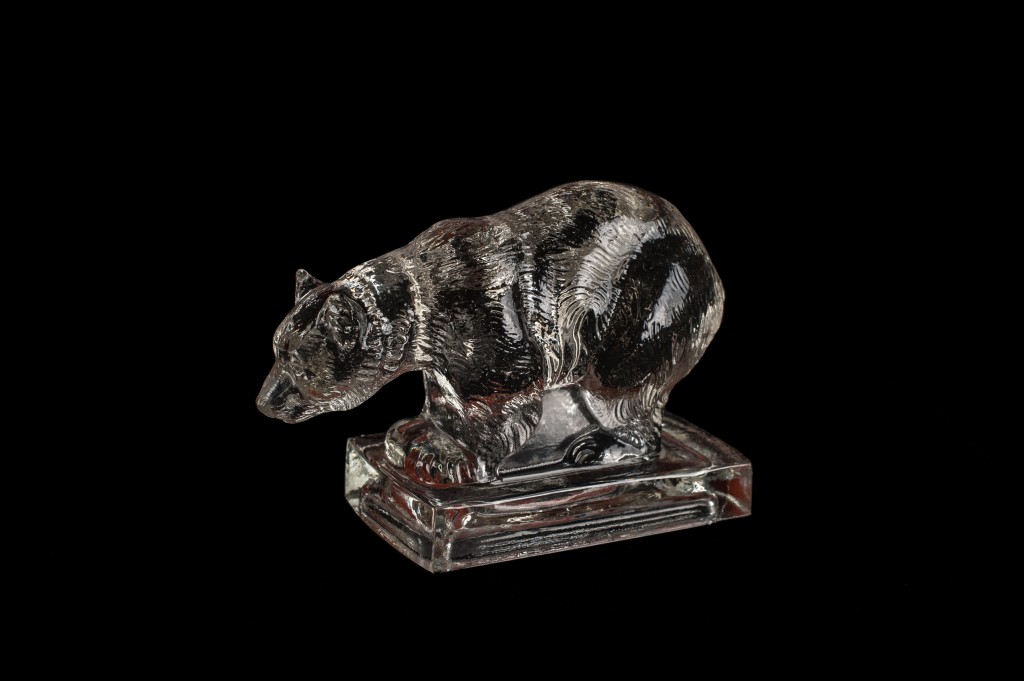 On the closure of Saltwell Park Museum many objects didn’t find a new home, they remained in the locked and decaying building.  Some of the collection was moved into the stores at the Shipley Art Gallery, which was the museum’s partner, but many objects remained in the Towers for at least six years. Across this period the Towers suffered from vandalism, regular break-ins and the roof in part collapsing.  As a result many objects were lost due to theft or the very poor condition of the building. It was not until 1974 when Gateshead Metropolitan Borough and Tyne & Wear County Council were formed that the remaining objects would be moved.  In 1974 Tyne & Wear Museums was created and the collection was moved into better and more secure conditions in the stores of museums and galleries across the region.

The Towers remained closed and empty for the next 30 years. It wasn’t until 2005 that the building reopened, its refurbishment part of Saltwell Park’s amazing redevelopment. Gateshead Council widely consulted the public as to what the Towers should be. It was decided that it should be a café and visitor centre. The Towers and the Park today are very popular. 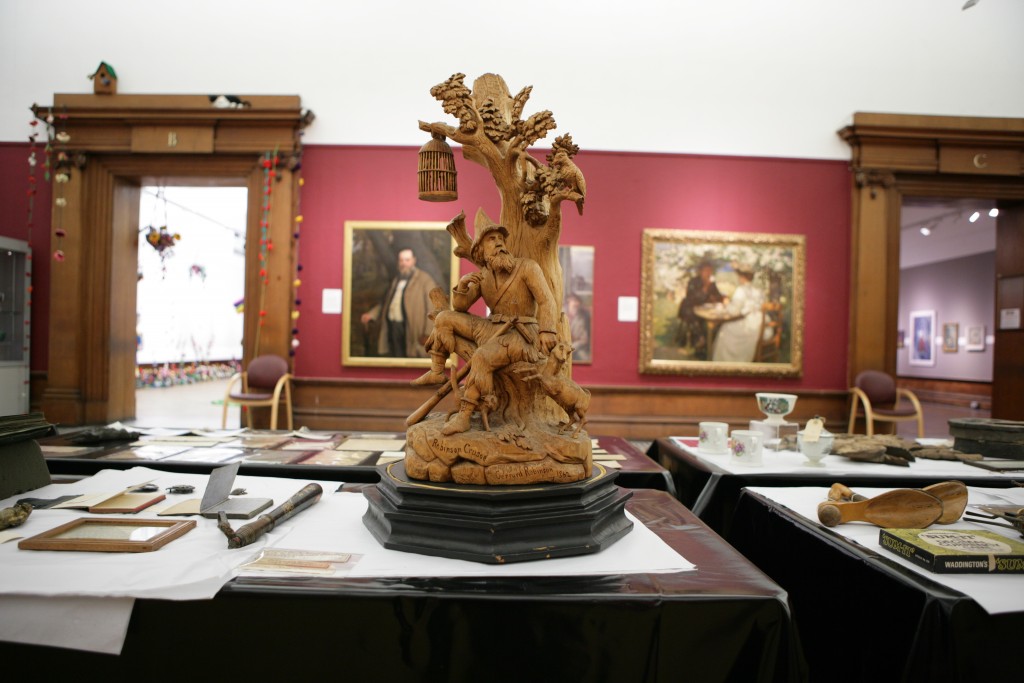 The story of the objects that were in the Saltwell Park Museum and what happened to them is a contentious one. Before it closed, the Museum was not run in accordance with today’s standards for museums and the care and conservation of objects. The poor documentation and record of the collection prior to the transfer meant that, though not lost, objects did not have sufficient records to verify their history.

Over the last four decades staff within Tyne & Wear’s museum service, Gateshead councillors and council workers have had to deal with frustrated Gateshead residents who want to know what happened to their Museum and its collection.  Because the irony is that, although the Museum might not have been up to modern standards, within its short life it was extremely popular.  Early visitor books record an average of 800 people attending daily and even in its final year it was averaging 1200 visitors a week. 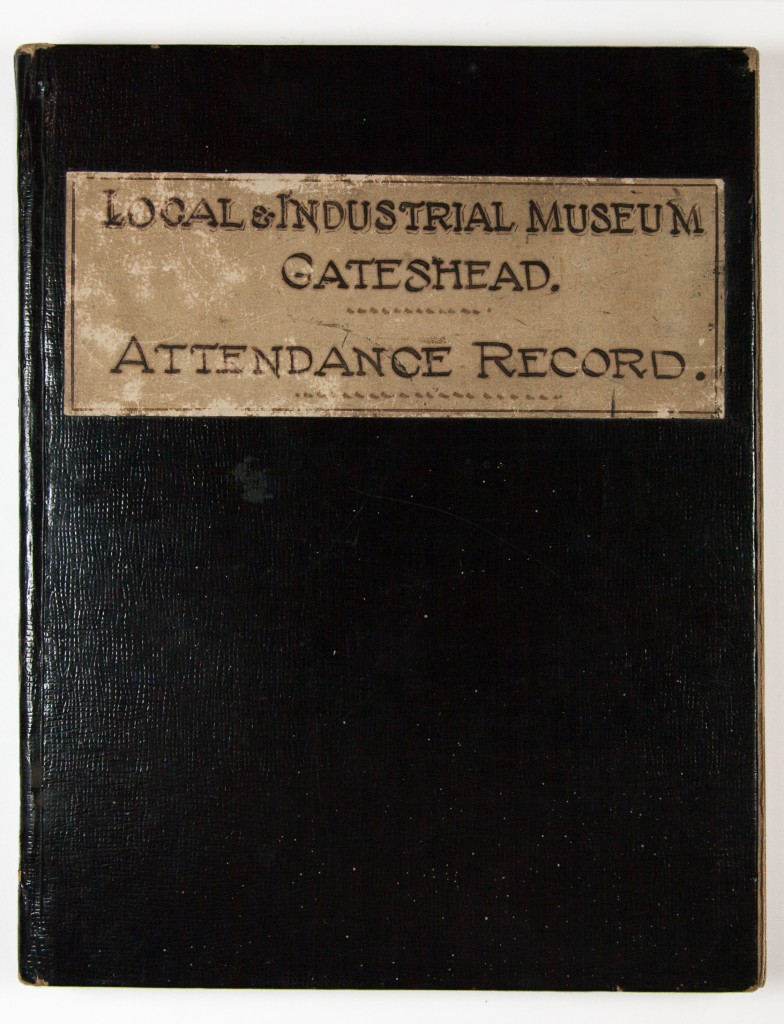 The first ‘Attendance Record’ and Visitor Book from Saltwell Park Museum or ‘Local & Industrial Museum, Gateshead’. Record visitors from 1933 to 1935.

For a generation of Gateshead residents, especially those who grew up and still live in the Bensham, Low Fell and Saltwell areas, it was an important part of their cultural life, their youth and identity. People who were adolescents and teenagers in the 1950s and 60s will have strong and sometimes vivid memories of objects within the museum: penny farthing bikes, a life size golden goat, taxidermy, bird eggs, ship models and reproductions of the world in miniature.

Since 2008 there has been gradual work within Tyne & Wear Archives & Museums sourcing objects in the collections whose origins can be traced back to the Saltwell Park Museum. The culmination of this work is the permanent, and as a result of the large number of objects involved, evolving exhibition at the Shipley Art Gallery dedicated to the Museum’s collection. The exhibition opened on 11 June 2016. 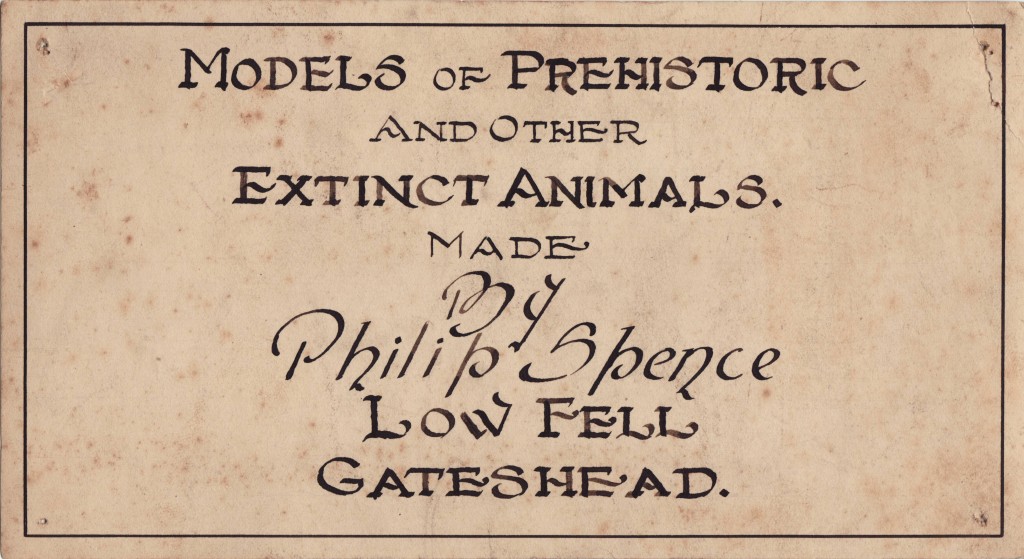 This is not a ‘Local History’ exhibition in the sense that it will tell a linear narrative of Gateshead’s history, in a style of presentation we maybe expect from museums or ‘historical’ exhibitions; timelines, dates and lots of information explaining what things mean. Today people experience heritage and history in very complex and different ways compared to the 1930s.  New technologies and global networks enable people to have the world’s knowledge in their pockets. At no other time in history have we had such individual access to so much knowledge and technology. As a result this exhibition will  pose more questions than provide answers. It will allow visitors both new and old to make their own decisions about things and what they mean. It will also evolve over time and will change, working in partnership with the various community groups and networks in Gateshead. The collection will also go out into community venues in Gateshead, so that people can use it to tell new and different stories beyond the traditional gallery or museum. 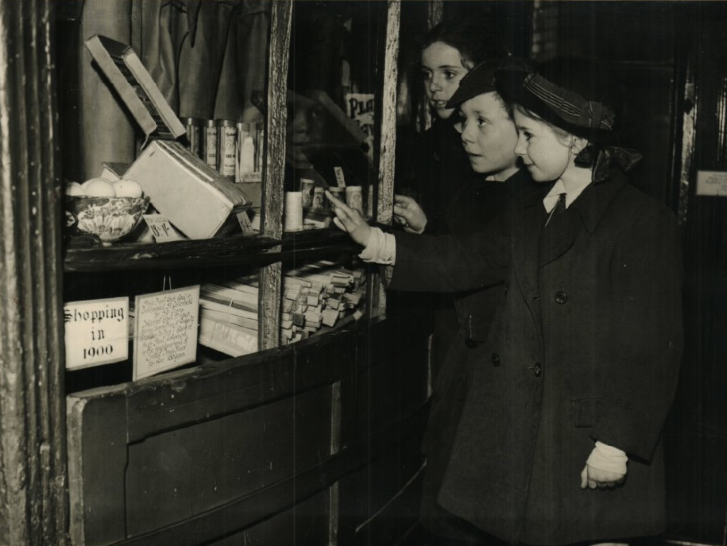 Photograph from 1950s of children looking at the ‘Shopping in 1900’ display at Saltwell Park Museum. 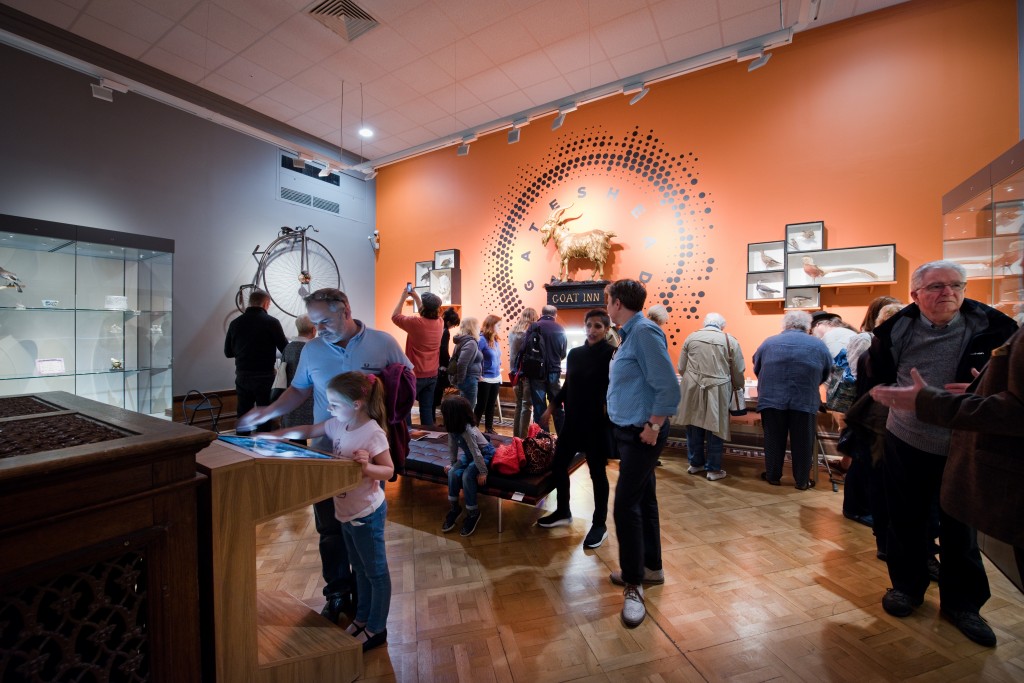 Saltwell Park Museum at the Shipley in June 2016 ©Colin Davison

What exactly is Local History? The Shipley is of course an art gallery, and it has to be remembered that it is the North East’s primary gallery dedicated to design and craft. But what is art and craft if it is not about culture, memory and identity? How can we use objects and learn from them without spoon feeding people meaning or resorting to an authoritarian voice of ‘History’, local or otherwise? How can we reuse objects in innovative and new ways that transcend their original use and function? How can an exhibition that presents objects from an old museum, not displayed for 40 years, be useful and relevant today? How can we use these objects to move beyond narrow definitions of heritage, community or even what we experience as art? 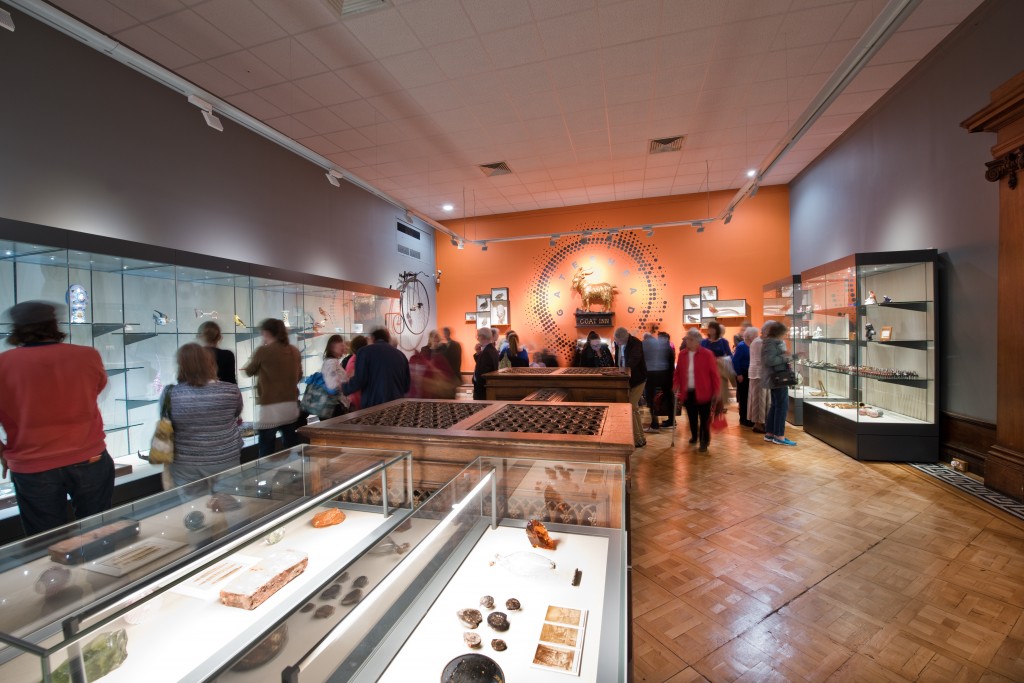 Gateshead has an amazing community network of local history groups, libraries and heritage centres like St Mary’s and Bensham Grove. This exhibition, within the Shipley Art Gallery’s current evolution as a people and community focused venue, will continue to support and be part of this network. It is hoped that this exhibition will challenge preconceived ideas about what history and art can be. Saltwell Park Museum and its collection represented a very particular view of the world and a pretty narrow one; there would be no value in just replicating that. The challenge for this exhibition and its future variations will be to make it relevant to new audiences with no experience of the old museum or Gateshead and at the same time bear in mind and be sensitive to the people who felt its loss. Ultimately this is an exhibition about identity, place and how we see the world reflected back at us through objects.

Nostalgia is not the most awful thing in the world, in some ways it can have a value but we can all too easily get caught up in its pull and dragged along with its propensity towards escapism. It is the most narrow form of what we call ‘History’ and the benefits are superficial. The question ‘Remember When?’ or invitation to ‘Take a trip down Memory Lane‘ is more often than not asked from a safe and comfortable historical or politically neutral distance. Nostalgia rarely asks difficult or complicated questions. It is never concerned with the future and does not take into account the complexities of history and nuances of the world we live in. 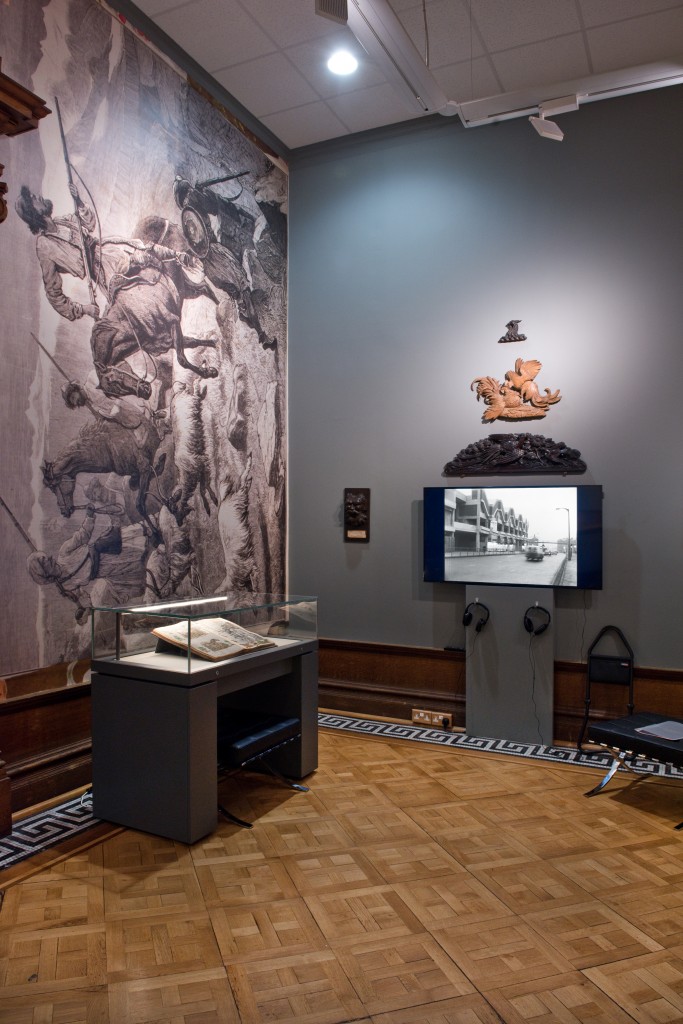 At its very worst nostalgia locks us into fixed and imagined ideas of the past, singular narratives that we cannot move on from or out of. In extreme cases it can be dangerous and possibly, maybe unintentionally, fuel less than tolerant ideas about national identity or ethnicity. Nostalgia’s rose tinted lure means that we can, if we allow it, get trapped telling the same stories over and over again in a world that is far from static or simple. The last decade has seen an exponential increase in what you could call ‘nostalgic’ activity. You can observe this via ‘past/present’ photography groups online, ‘historical’ re-enactments or ‘retro’ events. The term vintage seems ubiquitous. Why is that and what does it say about our culture and society today? 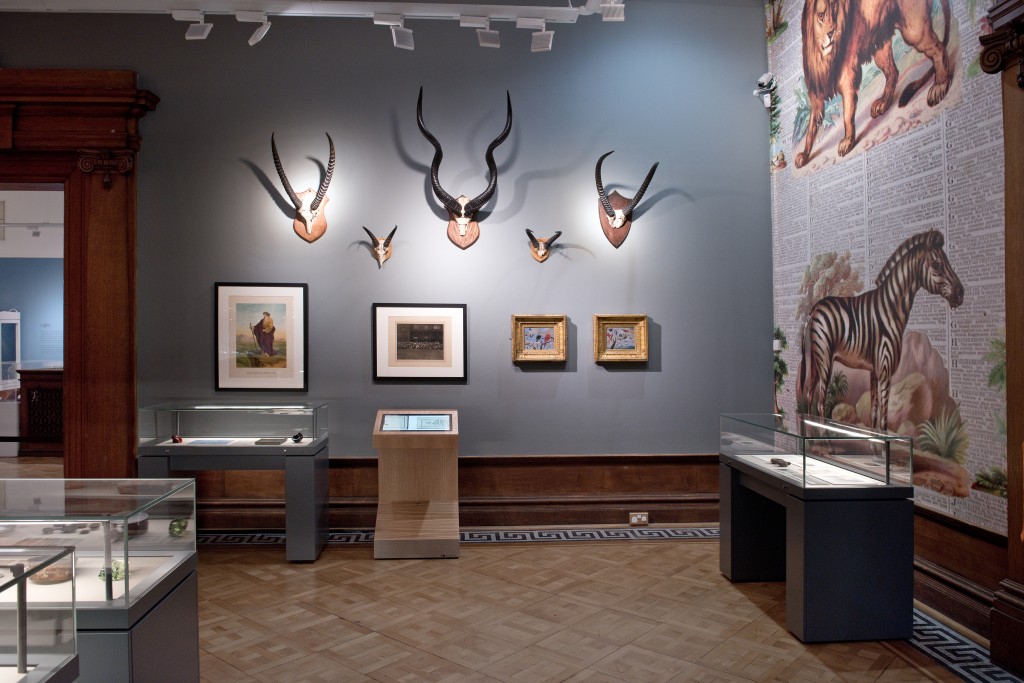 Here is a great quote from a book by Turkish writer Ornhan Panhuk called ‘Museum of Innocence‘. It’s a book about cultural memory, objects, identity and loss.  “Real museums are places where time is transformed into space.”  It is a poetic quote that could mean lots of different things. Ultimately what do we want from our museums and art galleries and what do we want them to do?  Understanding the complexities of how and why we got to a certain point in time and space is important and it’s hard telling a new story in a different way because people generally always prefer the path of least resistance. 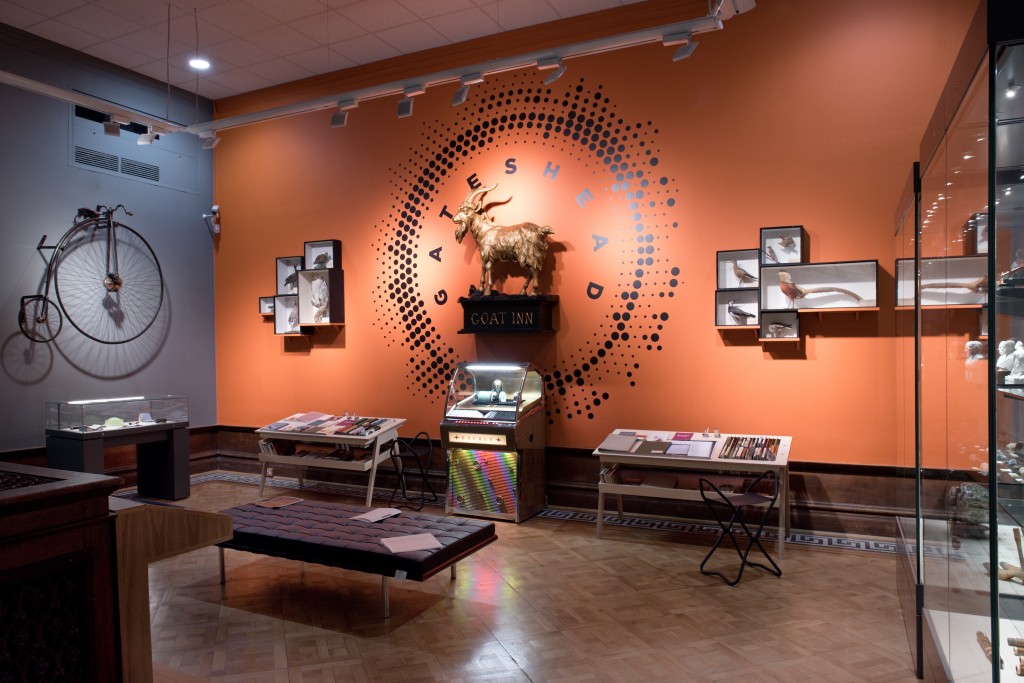 Maybe one aim for the Saltwell Park Museum Collection is to unlock some latent power that has been held within the objects and use it to look at the world in a different way and start to tell new and different stories about the present and the future. The centre of this world could be Gateshead if people are willing to look and listen.

Saltwell Park Museum at the Shipley

3 Responses to What ever happened to Saltwell Park Museum? (Part 3)