Were your ancestors apprentices at the Elswick Works?

I’m pleased to report that work is progressing well on the ‘Workshop of the World’ project to catalogue our Vickers Armstrong archives collection. I’ve recently been working on the firm’s administrative records, which include a large quantity of agreements.

Many of these relate to mergers, leases, patents, licensing and agency agreements. However, one does stand out from the rest  – a letter dated 23 October 1931 from Sir W.G. Armstrong Whitworth & Co (Engineers) Ltd to the Secretary of a local jazz band, the Scotswood Apaches agreeing to supply electricity to the Billiard Room of the Ord Arms, Scotwood (TWAM ref. DS.VA/2/22/4). This document gives a nice little insight into the local music scene. That’s one of the great things about being an archivist – you never know what you might unearth! 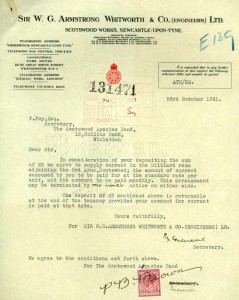 During the past couple of months I’ve also catalogued the personnel records we hold for the firm. Sadly, only a relatively small quantity of these survive. However, those that do include some very interesting apprenticeship records. There’s a series of three apprenticeship registers covering the years 1896-1941, which appear to have been kept by the Elswick Works Ordnance Department.

Information given in these registers includes name of apprentice, name and address of parent, trade, date of birth, date started, details of wages and remarks. The remarks column often gives a clue as to how each person got the apprenticeship, whether it was through previous employment as a post boy, a family link to the firm, recommendation by a member of staff or a personal application. It seems that your chances of getting an apprenticeship were much greater if you or your family were already known to the firm. 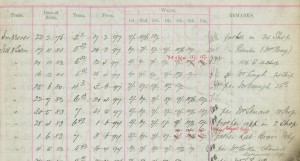 Many of the apprentices are listed as fitters and turners, although other trades include smiths, pattern makers, joiners, electricians, moulders, wiremen, whitesmiths, boilermakers and coremakers.

The personnel records also include a fascinating register of applications for apprenticeships covering the period 1856-1893 (TWAM ref. DS.VA/2/35). As well as including basic details of each applicant (such as name, age and trade) some of the entries include personal remarks about them. It’s clear that appearances really mattered. Many of the comments used are stock phrases such as ‘strong, good looking boy’ or ‘respectable and intelligent looking’. Entries also occasionally refer to the respectability of the applicant’s parents.

Most of the comments are favourable but there are exceptions. One of the less flattering ones relates to Francis Wright, a brass moulder, who is described as ‘not very respectable or intelligent looking … Very indolent looking’ (TWAM ref. DS.VA/2/35 p128). 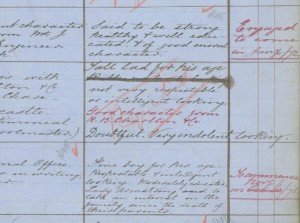 The entry below Wright’s relates to Edward Brice (an iron moulder, aged 14) and contains the fascinating remark “… Lady Armstrong said to take an interest in the family since the death of their parents”. Edward Brice’s application was successful and he started his apprenticeship on 6 November 1871. Having an influential supporter could certainly get you a foot in the door but it could only carry you so far and I’m afraid that it didn’t prevent Edward Brice from later being discharged for misconduct.

The register of apprenticeship applications sometimes includes remarks about an applicant’s previous employment. The entry below for Frederick Thompson shows that he had “two years good character from Palmers Shipbuilding & Iron Co.”. 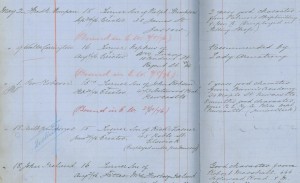 Interestingly the entry for Walter Carrington (directly below that for Thompson) documents another feature of the register – recommendations by a senior figure within the firm. In the case of Walter Carrington it simply states “Recommended by Lady Armstrong”. His entry doesn’t include any other details about character, appearance or intelligence. It’s safe to say that Lady Armstrong’s backing was all the recommendation he needed.

The apprenticeship registers in the Vickers Armstrong collection should be of real interest to family historians. If you think your ancestors might be listed in there then why not visit the Archives to look through them. You can find details of our location and opening times on our website.

13 Responses to Were your ancestors apprentices at the Elswick Works?