Was your ancestor a Sunderland freemason?

Last year the Archives was delighted to receive on deposit the historical records of the Phoenix Lodge, Sunderland. The origins of this freemasons lodge date back to 1755, when the King George’s Lodge was constituted. The Lodge met in public houses until its own premises were completed in Vine Street in 1778. Unfortunately the masonic hall was destroyed by fire in 1783. However, a new hall ‘rose from the ashes’ in Queen Street in 1785 under the new name of the Phoenix Lodge. The Phoenix Hall remains in use today and is the oldest surviving purpose built Masonic hall in the world. It’s cared for by the Queen Street Heritage Trust.

The freemasons had a significant charitable role in Sunderland through the mutual aid given to their members. They also played an important part in civic life, particularly in the years before the establishment of Sunderland Borough Council in 1835. Freemasons were leading figures in the establishment of a dispensary and subscription library in the 1790s and in the construction of the first Wearmouth Bridge. The opening of the Bridge in 1796 was vital to the economic development of Sunderland.

The Phoenix Lodge collection (TWAM ref. S.MAS9) contains a variety of documents including minutes of meetings, financial accounts and membership records. The collection includes details of members from the establishment of the Lodge in 1755 through to the late Twentieth Century. The oldest item is the Lodge’s constitution and byelaws dating from October 1755 (TWAM ref. S.MAS9/6/1) and this book includes a register of members covering the years 1756-1811. 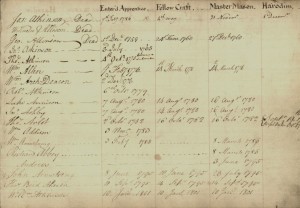 There are also two further registers of members covering the period 1809-1919. These registers include the names of each new member, their age, profession, residence and the name of person who proposed them for membership. Members came from all walks of life with popular occupations including mariners, engineers, ship owners, commercial travellers, merchants, publicans and agents. If you have family who lived in Sunderland then it might be worth taking a look to see whether they were members of the Phoenix Lodge. These documents are fascinating and have to potential to enrich our understanding of our ancestors. As well as telling you about them, the registers give you a real insight into their social life, by recording the names of the men they knew and mixed with. 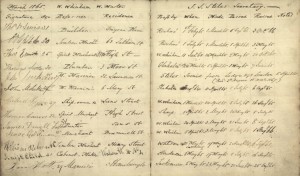 The collection also includes declaration books for the years from 1884 to 1992. These contain the same key information as the registers of members but also show the declaration that each new member made. 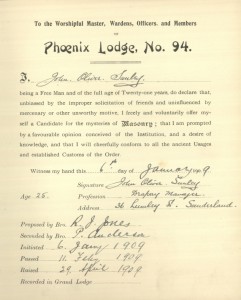 Access is restricted to Phoenix Lodge records that are less than 50 years old but that still leaves a vast fascinating world for you to explore. The records from 1755 to 1963 can be searched in the Archives searchroom at the Discovery Museum, where you can be assured of a warm welcome. Details of our opening hours and how to find us can be found on our website.

My thanks go to the Lodge for depositing their records with us and also to Dr Gill Cookson for providing valuable background information about freemasonry in Sunderland.

5 Responses to Was your ancestor a Sunderland freemason?