The Archives
Posted by administrator on October 8, 2010     Permalink     Leave a comment

The Archives has just acquired an intriguing new addition that has required some detective work to uncover the truth of.

On the surface it is an L-shaped map of the River Tyne from Heddon on the Wall to the sea, with an account of the opposition of the Masters and Pilots of Trinity House, Newcastle, to a proposal to erect a ballast shore at Jarrow Slake. This is dated 1670.

It has been put together in stiff covers, using an old deed, perhaps to give an impression of antiquity, which led to the idea that the whole thing might be a forgery, particularly as the binding has pasted to it a catalogue entry for the item declaring it to be “OF SUPERLATIVE RARITY” 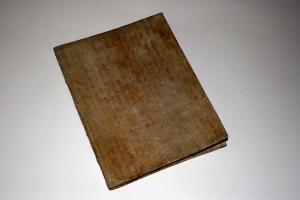 However, further research showed that the case was certainly a genuine one, arising from a proposal by Newcastle Corporation, which was vehemently opposed by Trinity House on the grounds that it would potentially block the channel and impede the coal trade. We could also see that the case, now mounted on linen, had writing on the back of the paper. Photographing it in reverse on a light box revealed this to be a title in a 17th century hand. 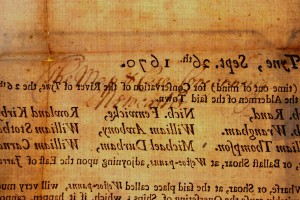 17th century handwriting on the back of the map

We also found that the British Library has a copy of the map and accompanying case, but it is described in their catalogue as showing the river only from Newcastle to the sea. 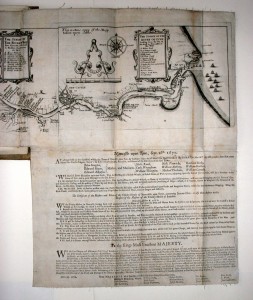 The broadsheet from Newcastle to the sea

Further investigation showed that the map of the river from Newcastle westwards was in fact a separate piece that had been joined on, presumably when the binding was put together. So, was it from the same date?

Eventually we found a reference in Brand’s “History and Antiquities…of Newcastle” to just such a map commissioned by the Common Council in 1675, just five years later than the other piece. This appears to be it. 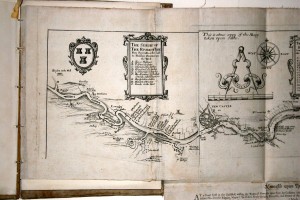 The western portion of the map, probably from 1675

We don’t know how many of these maps were originally printed, but as far as we can tell this now seems to be the only one still in existence, so an exciting find, and a puzzle apparently resolved.