With Halloween fast approaching, I got to thinking about what we have in the collections at South Shields Museum to represent this spooky time of year!

I’ve recently been scanning a large collection of 35mm slides, taken by Ronald Sanderson who lived in South Shields. Ronald was a prolific amateur photographer, who liked to take pictures of his travels around the country with his wife Mabel, as well as at home in South Shields.

Among Ronald’s slides are some pictures of a small fireworks display, dated 1966. I imagine the slides were probably taken in Ronald and Mabel’s garden, or the garden of a friend; one of the fireworks is shown propped up on top of a pair of wooden stepladders! 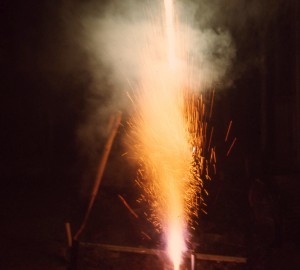 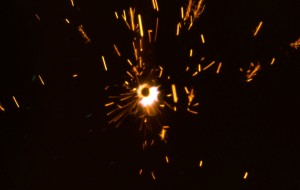 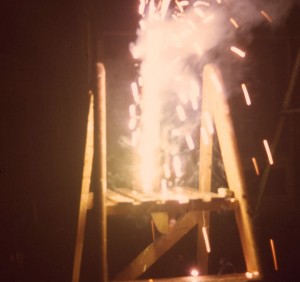 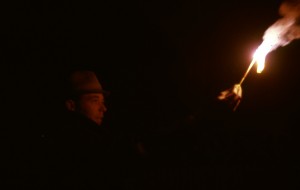 Another photograph from the museum’s collection was taken about 20 years after the ones seen above. It shows children enjoying a Halloween party at the Gambling Man Gallery on Wapping Street, South Shields, in the mid 1980s. The kids can be seen sitting around a table, eating party food. Placed in the middle of the table is a turnip carved into a Halloween jack-o’-lantern. 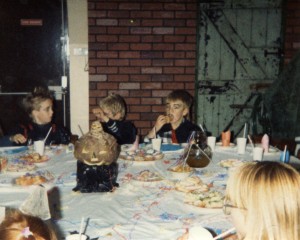 I grew up in Northern Ireland at about the time this photo would have been taken, and when I was little my family always carved a turnip, rather than a pumpkin. Turnips were traditionally used in Ireland and Great Britain, until recent years when pumpkins became more readily available in supermarkets.

Have you ever carved a jack-o’-lantern from a turnip? I can tell you, from personal experience, it’s pretty hard going! I doubt anyone still bothers to carve a turnip lantern these days, but get in-touch if you do!

The last item I found squirreled in the museum store is this small children’s tinplate toy. 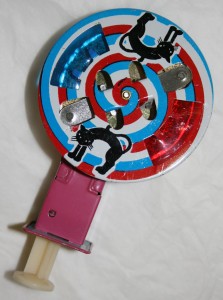 It’s a hand operated spinning Catherine wheel which produces coloured sparks when the wheel spins round (best seen in action, in the dark!). The disc on the front features two black cats. It was made in Japan about the 1970s, and was probably sold as a cheap child’s novelty from a shop like Woolworths.

In the grand scheme of things, we don’t have a lot of Halloween related items in the Tyne & Wear Archives & Museums collections; if you have anything that you’d be willing to donate, please get in-touch.

I hope you have a spooky Halloween :O