Following on from two sold out workshops at the Discovery Museum the Transmit/Receive team took to World War One relevant sites around Tyneside to experiment with Morse code machines, hydrophones, short-range radio transmitters and a variety of microphones. These environmental explorations would allow us to broadcast and listen back to contemporary sounds in places where these devices may have been used 100 years ago. As well as listening in on site we also broadcast all the audio live using a web stream, allowing anyone in the world to listen in to our activities.

For this I designed the Transmit/Receive box. 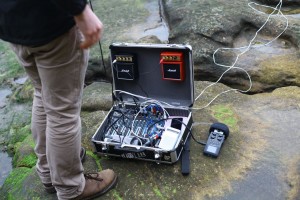 Using this relatively small box, we could listen underwater, transmit and receive short range AM radio, amplify sounds, create Morse code tones, mix various channels of audio and stream all of this online.

Equipped with the box containing our period relevant listening technologies we took to Tyneside locations to listen to our creations in the field. Over two days we visited various places in Tynemouth and the Fulwell acoustic mirror. 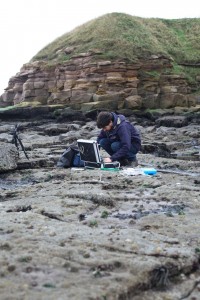 The first day involved a trip to Tynemouth, where we located places we believed might have been used for WW1 activities. Many of the Spanish Batteries were used as defence locations during the war. Though little is left of these structurally, you can see where they would have been due to the topography of the contemporary landscape.

We set up near the old Spanish Battery, south of the Priory, enough to the sea so we could listen using our DIY hydrophones. We didn’t predict the tide coming in so quickly. Before the North Sea attempted to submerge us, we retreated to higher ground for safety, whilst all the time transmitting sounds via our online stream.

With some intriguing looks and questions from passers by we continued by walking further into Tynemouth. We chose two more locations; one was near the old radio transmission centre at the north side of Longsands beach and the other from the north pier of the mouth of the Tyne.

In this video you can hear Morse code and hydrophones 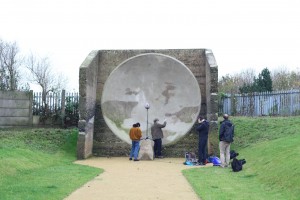 On the second day we visited the Fulwell Acoustic Mirror. This WW1 relic was used as an early warning device to warn military personnel of invasion from German Zeppelins. These amazing concrete structures act like huge ears, amplifying any sound that reaches its parabolic dish. 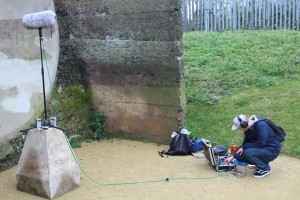 We set up a microphone in the centre of the dish to listen in on what it could hear and conducted a number of audio experiments using a variety of listening technologies. We explored performing with feedback loops, radio feedback, Morse code and electromagnetic audifications. By setting up a feedback circuit using a shotgun microphone and some small speakers we actually got a sustained tone out of the mirror, which fluctuated depending on the sonic activity around it.

It was very exciting to take our devices out into the real world. By transmitting the audio online during the whole session the visits became very performative, improvising with the immediate soundscape and having to watch out for incoming tides. Thanks to all the people who came along for the trip, and the passers by who asked questions about our activities.