In this part we would like to introduce five more of the top ten hats.

In the collection there are 35 bonnets, nine of which are mourning bonnets. This one dates back to 1890 and is a fine example with a great deal of details. It is a wired crinoline braid with an upstanding brim, which is edged with velvet trimmed with sequins, orange silk flowers and silk net ruffles. Ostrich feather has been used to decorate the left side.

Mourning clothing is typically black and purple in this period, with black becoming more popular when Queen Victoria started to wear black following the death of her husband Prince Albert in 1861. Prior to this purple was the mourning colour of choice for most people. By around 1890 bonnets were less fashionable and had begun to be mainly worn by older women. 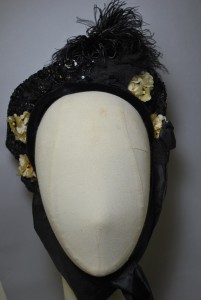 Weddings are an important moment for most people. Cream bonnets had been widely used by brides. This example from the is a cream handmade bonnet in the style of a baby’s hat made to match a wedding dress. It was worn by Mrs. Andrews at Hatfield college chapel, Durham in 1969. Fortunately, Discovery has the wedding bonnet, dress and pictures of the wedding day in the collection. 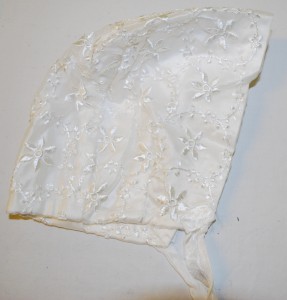 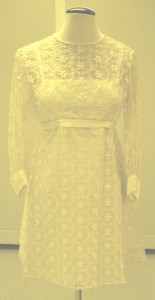 These three hats are the smallest ones in the collection. They are in fact samples of hats made by a milliner, and that is why they appear to be tiny. The height of their crowns is around 5 to 6 cm and the width of the brims is between 1.5 and 3 cm. All of them came from the same era, between 1920 and 1924. Various materials have been used to make the hats. The main fabric is different coloured silk. In addition, gauze, aigrette, velvet and straw are used for decoration.

These hats have been made by a milliner, or hat maker, to show the skills they have in making hats.

The term milliner derives from the old English word milener meaning an inhabitant of Milan. This is due to the fact that in the 1700s large quantities of high quality straw hats were produced in Milan, earning itself a reputation for high fashion.

In fact, this green one has the use of straw for the basic structure of the hat covered by green and bronze fabric. 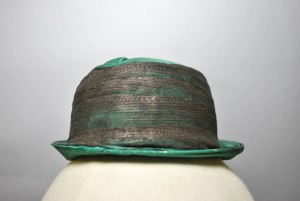 The purple hat is a silk hat with a deep crown and deep upturned brim topstitched round the edge. The upturned brim with the pattern of diagonal lines brightens the design of the hat and so do the peach and mauve artificial flower bunch. 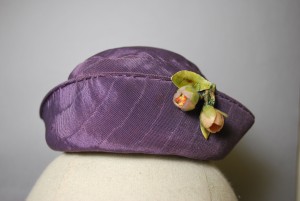 The black hat is in silk velvet with mock turned-up brim. It was decorated with light and dark blue aigrette. The use of the feathers creates a focal feature to the hat, adding a touch of glamour to the garment. 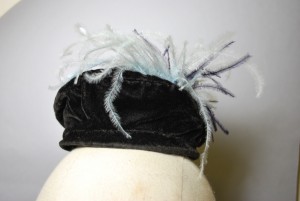 This is the largest hat in the collection, whose height of the crown is 20.4 cm and width of the brim is around 19 cm. It is a large sun hat of navy blue straw with a high cone-shaped crown and wide curved brim. It was decorated with a fake butterfly in white, navy blue and red straw. It was made in Italy and dates from 1958 to 1963.

The fashion of large goes back to the 1780s. During the period all hats were extremely large and from about 1783 were worn either straight on the head or at different angles. However, the enormous hats of the late Edwardian era reached their maximum width in 1911. Afterwards styles became smaller, with large crowns fitting lower on the head and small or medium brims. 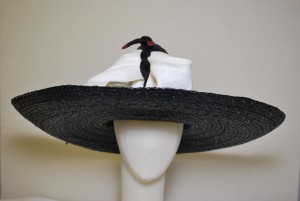 Half hats became popular in the post-war period, particularly in the 1950s. This type of hat was designed for both day and evening wear. Sometimes it involves details such as sequins and veils. The specific style was also popular among brides.

This is the only half hat in the collection. It is a woman’s half hat with a bow set on the front of the garment. 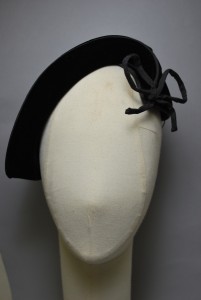 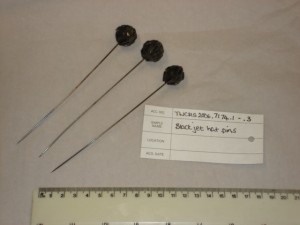 Classic men’s hats consist of top hats, bowlers, fedoras, trilbies, homburgs and various other styles. They have usually been made of animal materials in order to keep warm and protect them from rain and wind. On the contrary, panamas were designed to deal with summertime in the early nineteenth century. In general, panamas are made of lightweight materials such as straw.

There are four panamas in the collection. Dating from 1930 to 1939, this one was made of natural straw with flattish crown and wide floppy brim. It was lined with white silk and its brim was edged with brown straw. The soft texture makes it convenient to carry while travelling. 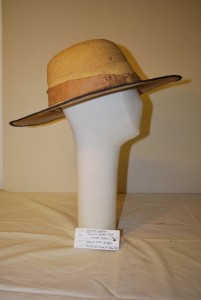 If you would like to view more of the hat collection online, go to the online system and we would love to hear your favourite hats.