Functional or fashionable?  The design of hats interests people but what are hats for?

Working on several projects in the costume and textiles store at Discovery for the past eight weeks, Hannah Keen and I have tried to figure out the link between the collections and their hidden stories, particularly the hats and bags collections. Starting from checking their documentation records, we have taken out the well-wrapped objects from their dedicated boxes and photographed them. Then the photos of the objects have been uploaded to the digital collections database of Tyne and Wear Archives and Museums in order to share the photographs with the public.

There are 487 hats in the collection, which date from the early seventeenth century to the present day. Working with the various hats has certainly sparked our imagination. By looking at the details of the hats, we have begun to understand more about the history: Why, or how the hats were made? Each of the questions made us think about the function and fashion of hats. It has been an interesting process and therefore I would like to introduce our top ten hats in the Discovery collection.

The first one caught our attention by its unique shape, which is a tall triangular cone. In fact it is one of the oldest hats in the collection dating from 1700 to 1799. It has blue green thread with gold sequins stitched onto the front forming a leaf pattern in gold thread. It could be an ecclesiastical hat. However, we have not found information about it. Does anyone have any ideas? 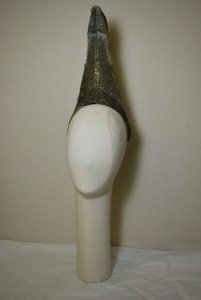 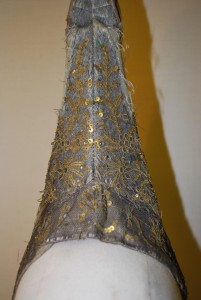 This hat is a tricorne, and the name originates from the design of this type of hats, simply that it has three-corners.  The tricorne is certainly one of the symbols of the eighteenth century and this general style was referred to as cocked hats. Due to its popularity, tricornes varied greatly in fabric and size. Typically, tricornes were made from material such as beaver-hair felt and wool felt. There are four tricornes in the collection. This one is the oldest tricorne, which dates from 1780 to 1790. It was made from silk velvet and feathery fabric in France. Tricornes were originally designed as a part of military uniform, they became more widely worn by males among the upper and middling classes. 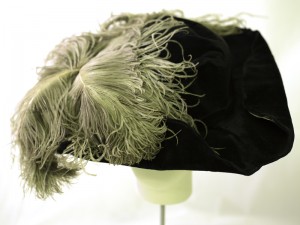 The time of tricorne ended around 1789 when they were supplanted by bicorne (a two-cornered hat) just after the French Revolution. In the collection, there are 13 bicornes. 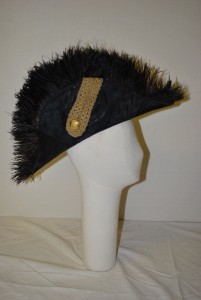 Straw hats were very common for women of all social classes in the nineteenth century. Around 1810 straw hats came into fashion, followed by cheaper alternatives made of cardboard. By 1830 the brim of bonnets got larger both to conceal the side of the face and to allow room for the large curls that framed the face, which was a popular choice of hairstyle at the time.

There are 35 bonnets in the collection. This one in our top ten is due to its simple design. It is the original form of bonnet. As bonnets became more popular, more decoration appeared such as coloured ribbons, flowers, patterns and many more intricate details. Bonnets were very popular and appeared in books such as Jane Austen’s. She depicts quite a few scenarios that girls pick their favourite ribbons for themselves or friends in order to embellish their dresses, hairstyles and bonnets.

This straw bonnet dates from 1840 to 1849. It is a plaited bonnet made from natural straw and has deep brim with elongated sides. Unfortunately now it is very fragile and coming apart in places. In terms of object-conservation, while the bonnet was unpacked, photographed and repacked, we followed the artefact-handling principles given by the conservators such as keeping steady or supporting the weight of the object very carefully in order to avoid any potential damage. 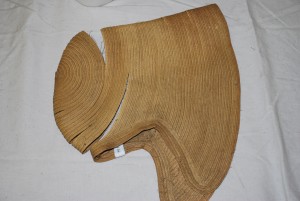 Top hat is one of the most recognizable objects from the nineteenth century and it is no surprise that there are 52 top hats in the collection. This example is a travel set of top hats. There are two men’s silk black top hats with a leather box in this set. Interestingly, one of them can be folded flat to fit in the top part of the box.

For the use of travelling and storage, the Collapsible Top Hat was invented. A record shows a Hatter named Thomas Francis Dollman was the inventor who designed the elastic round hat that might be made of beaver, silk or other materials in 1812. 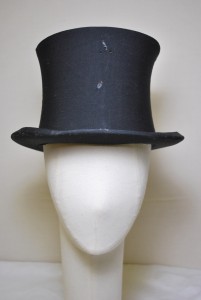 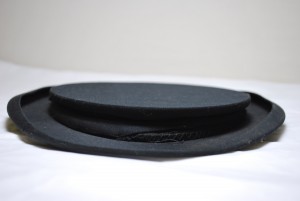 This hat was made by Fenwick. The label inside reads:

Because Fenwick was established in 1882, this hat probably dates from 1880 to 1890. At Discovery there are a few objects from Fenwick including well-made beautiful clothing and some furniture used in the Fenwick store in Newcastle. 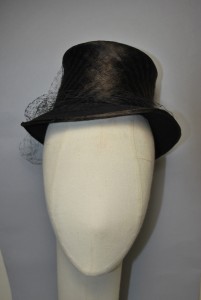 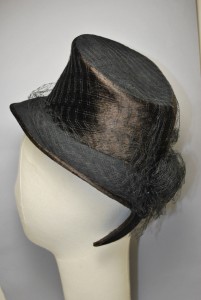 In the next part we will explore five more fabulous hats.