This is a guest post by Zoe-Marie Dobbs, a volunteer with Tyne & Wear Archives & Museums.

The garment that survives in largest quantities from the 18th century is the waistcoat. This was often the most expensive and decorative part of a man’s wardrobe. Although the French court dictated the waistcoat fashions of the 18th century, by the beginning of the 19th century British gentlemen such as George ‘Beau’ Brummel held the dominant influence waistcoat styles. 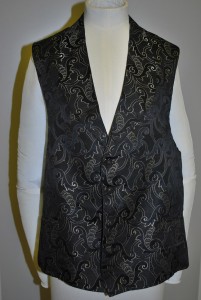 This black silk grosgrain waistcoat (above) is from 1853 and has a decorative black and white brocaded scroll design. As the rest of the man’s suit became more dark and muted in hue, the waistcoat which was often highly embellished or bright in colour allowed men to showcase their personality. From the 1840s onwards, richly patterned waistcoats in darker colours became desirable. Different styles of waistcoat were worn according to the cut of the coat, season, time of day, and occasion. It also become fashionable to wear two waistcoats at once during the 19th century, with the upper waistcoat being cut shorter so that the lower portion of the waistcoat underneath would be visible. 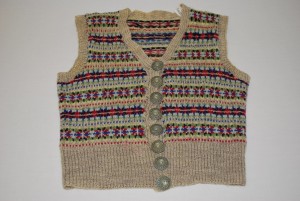 This is a childs waistcoat from the 1940s. Is was knitted by the donor’s mother, Margaret Knox in the 1940s who lived in walker before the family moved to Chicago in 1956.  Many women took up knitting during the 1940s in order to help with the war effort. Women were encouraged to make items such as socks, jumpers and gloves for the army and navy. With wool in short supply during the war, wool was unpicked from unwanted woollen items and used to make new garments. 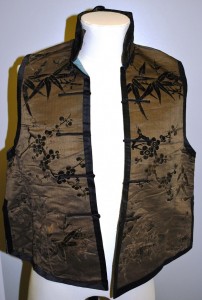 This brown silk and velvet waistcoat features a bamboo design. It originates from Japan and dates from 1920-1930.Bamboo prints as well as other nature motifs often feature in Japanese textiles and are used to symbolise different qualities. The resilient Bamboo plant is believed to represent perseverance and strength in Japanese culture. Historically, the colour brown is seen as a symbol of the common people in Japan. 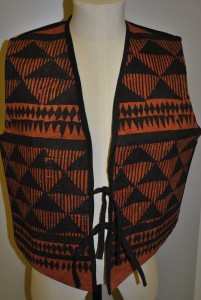 This particularly striking waistcoat was made in Nairobi, Kenya.  The waistcoat was manufactured by Maridadi Fabrics for the Fairtrade company Traidcraft PLC based in Gateshead. Maridadi Fabrics was created in 1966 as an income-generating community project for women. This waistcoat would have been made by a woman living in the slum area of   Pumwani and Shauri Moyo in Nairobi. The creation of this garment would have helped to provide a source of income in this poverty stricken community. The front of this waistcoat is made of bark cloth – a traditional, East African textile. The bark cloth fabric is made by extracting the natural weave found underneath the outer layer of tree bark. The natural bark cloth the goes through a laborious process of soaking stretching and hammering the natural textile before the final garment is produced. The making of this garment helps to preserve the important African craft of bark cloth making and provided a source of income for women in impoverished slum areas. Bark cloth fabric was often used for royal robes and traditional African dress until the early 20th century. This waistcoat dates from between 1979-1994. 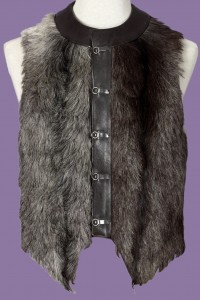 This waistcoat dating from 1968-69 is made from another unique material – goats fur. The waistcoat was made by Douglas MacLennan who is now a lecturer at Northumbria University’s school of design. This waistcoat was part of his graduate collection when he was a student at Central St. Martins School of Design in 1969. MacLennan’s graduate collection went on display at the Victoria and Albert Museum in an exhibition representing the best of 1960s fashion.

This waistcoat is still a very fashion forward piece and could easily be worn today. 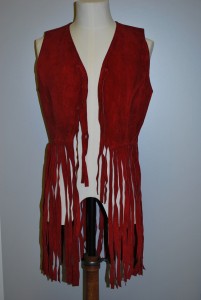 This red suede fringed waistcoat dating from 1970 is a brilliant example of the hippie- chic style atheistic that characterised fashion during this decade. The front of the waistcoat is open and the curved edges of the front panels are held across by three strips of matching suede on either side, pushed through holes in the waistcoat and secured with a knot.  Sewn along the bottom is a deep fringe of strips of matching suede.