This is a guest post by Zoe-Marie Dobbs, a volunteer with Tyne & Wear Archives & Museums.

In the costume collection at the Discovery Museum, there are over 250 waistcoats which span from the 17th century to the present day.

King Charles II was the first person in British history to mention the waistcoat. Having been inspired by the vests worn at the Persian court, he officially endorsed the wearing of these garments in 1666- when he declared that waistcoats should be recognised as part of proper court attire in England. 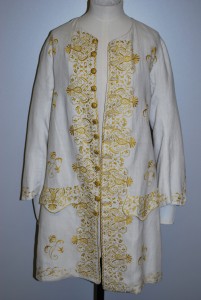 This men’s waistcoat (above) is one of the oldest waistcoats in the collection. It dates from 1690-1720.Waistcoats during this period often had sleeves. This waistcoat is made of cream linen and features beautiful and intricate hand embroidery in vibrant yellow silk thread. The color and design reflect the influence of the Indian textiles that were imported to Britain from India during this era. The shape of the embroidered leaves and flowers which decorate this waistcoat mirrors the design of printed Indian cottons. This waistcoat would have been worn on informal occasions in the daytime, probably during the summer months. A gentleman would have worn this waistcoat with a plain coat and breeches.

A very similar example can be seen at the V&A Museum: http://collections.vam.ac.uk/item/O137743/waistcoat-unknown/ 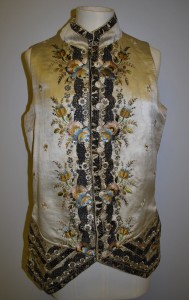 This waistcoat (above) dates from 1750- 1760. By the beginning of the 18th century, waistcoats became shorter in length and became sleeveless. This is a typical example of an 18th century waistcoat with its elaborate embroidery. The waistcoat was often the most decorative part of a man’s wardrobe .This waistcoat with its rich decoration, including sequins and metallic thread would have been worn during formal occasions. Although waistcoat fronts were elaborately decorated, the back would be made of plain lining material as this would never be seen in public. 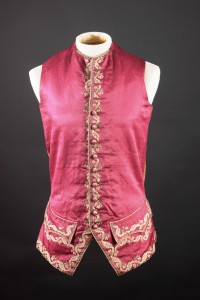 This late 18th century waistcoat (above) is of red silk satin stripes. The world of fashion was dominated by French during this period. Opulent waistcoat designs such as this one would have been made to reflect the flamboyant styles worn at the court of Versailles. Floral motifs, vibrant colours, rich brocades and silks were very popular and this is reflected in many 18th century waistcoats. Red, green, pink and cream were all popular colours. The number of buttons that would be done up on the waistcoat, and how much of the cravat was revealed changed from year to year. 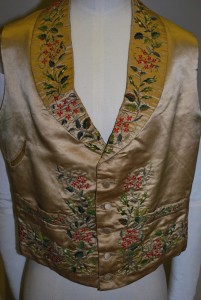 This waistcoat (above) dates from 1820-1840. By the early 19th century, the waistcoat reached to just below the waist and the collar and revers had diminished in size. It also became fashionable to wear two waistcoats at once.  Men’s fashion had become more sombre. Linen and broadcloth in darker more muted colours replaced the rich silks and satins used in menswear during the previous century. The waistcoat would have been the most colorful and decorative part of a man’s wardrobe. Highly decorative waistcoats such as this gold one made of gold satin would have been reserved for more formal occasions. In the 1830s waistcoats with shawl collars were very popular. 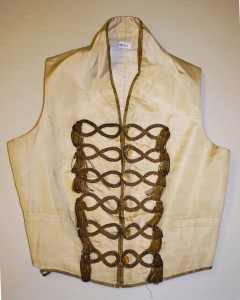 By the early 19th century, men’s waistcoats were more boxlike in shape. This waistcoat (above) from 1830-1870 is a particularly striking example with its ornate frogging detail. It is constructed from cream grosgrain silk and is trimmed with metallic gold braiding and decorated with tasseled gold frogging. The addition of braid trimming to waistcoat edges become fashionable in the 1850s. After 1850, light or white plain ones were most preferred. 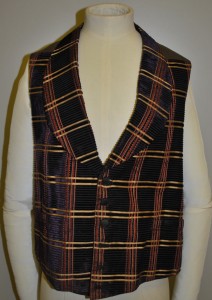 To see the rest of the waistcoats in my top 12, check out my next blog post: Top 12 Waistcoats part 2!