Over the past four weeks the Toon Times project has been working with an Age UK group in West Denton. The group was made up of 12 women and 1 man, all aged between 70 and 90.

The Toon Times project aims to collect memories and stories of Newcastle United Football Club – from fans and loyal supporters, but also the ordinary people living locally, whose lives have been affected by the presence of St. James’ Park and Newcastle United.

Some of the group are examples of North Easterners who although having lived on the doorstep of St. James’ Park most of their lives, have never actually stepped foot inside the ground, and have never taken much of an interest in football. Ann who grew up in Newcastle said she remembers “being sent to queue for hours and hours, right down the street to get Cup Final tickets for my Dad, but I have never been inside the stadium”. Paddy said “the saying goes ‘Pigeons, Football and the Wife’, or it’s something like that, I can’t remember, but the wife is always last!” However, for a group who on their first meeting said they were not one bit interested in football, they certainly had a lot of stories to tell, and it was evident that their lives had at some point crossed with this great club.

In order to stimulate memories we held a number of reminiscence sessions. One session asked the group to think more generally about recalling memories; we gave them a series of postcards from places around the north east and asked them to recollect anything they associated with that image. We also used a 20th century domestic loans box from the Discovery Museum, this contained objects that many of the group were familiar with, like a liberty bodice, a bakelite telephone and a flat iron. These activities helped stimulate memories from the past and made the group realise how their seemingly ordinary stories were important to us in a changing world.

In another session we introduced images of footballers from the fifties and sixties; an era that the group showed particular interest in. We asked them to recall the names of players, although many in the group had never seen these men in action, most could recall the faces of players like Jackie Milburn, Bob Moncur and the Robledo brothers. The group started to tell us how they had met some of the players; Margaret said “I went to register my son for his ration card at Hood Street and I was sat in the reception chatting away to this bloke, just waiting my turn, and I suddenly realised who it was, it was Jackie Milburn! I told my husband and he kicked himself for not coming with me.”

Objects from the Newcastle United handling collection were also used throughout the sessions, objects like a replica 1969 Fairs Cup shirt, steel toe capped football boots, a rattle and a leather case ball. The case ball caused a particular stir for Paddy who told us about a raffle she had entered at the West Denton Association, where she used to go dancing. She won a football signed by the Newcastle United first team, with autographs from the likes of Alan Shearer and Gary Speed. She said “I have five grandsons and I could only give it to one, it didn’t seem fair so I’ve kept it for myself and they can fight over it when I’m gone”. Next week Paddy brought her football in for us to see. 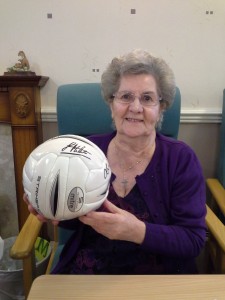 Paddy with her Newcastle United ball

In the last week we rounded our time off with a trip to St. James’ Park. The group had tea and biscuits in an executive box with a view of the pitch, and then a short tour of the stadium. The trip was a great close to the sessions and the ladies thoroughly enjoyed their day. Linda Swan, who runs the Age UK group said, “everyone enjoyed their visit very much (including me!) we all had such a lovely time” and “The visit was a great success! Everyone was amazed by the size of the stadium, a couple of the ladies had to touch the grass, as they couldn’t believe it was real! They were very impressed to learn that it was heated underground. They all had such a lovely day, thank you, again.” 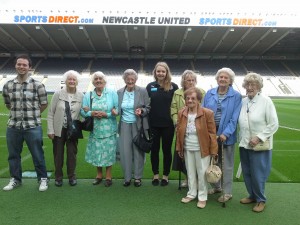 Toon Times is continuing to collect memories of Newcastle United Football Club. The culmination of this project will be an exhibition about the club and its fans opening in February next year. If you, or anyone you know would like to share a memory with us then please comment below or email anna.dodgson@twmuseums.org.uk

Watch this space for developments on the Toon Times project and regular updates about the upcoming exhibition.