The wildlife illustrations of Edward Lear

Nowadays nearly all of us own a camera. They are often built in to our mobile phones. We can take photos of whatever we want, whenever we want. It is the age of the ‘selfie’, national photographic competitions such as the Wildlife Photographer of the Year and instantly posting pictures on social media sites. But, probably needless to say, it has not always been so. Some wonderful examples of a time before wildlife photography can be found in the Great North Museum: Hancock Library. Most people have heard of Edward Lear. If not, this first line of his most famous nonsense poem might ring a bell; ‘The owl and the pussy cat went to sea in a beautiful pea green boat’. It is this kind of poem, alongside comic sketches, that he is now widely known for. However, from his teens he actually earned a living as an artist, carrying out commissions from the likes of Lord Stanley, the 13th Earl of Derby. 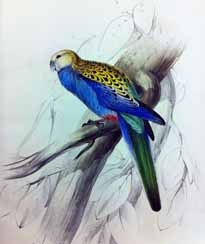 Edward Lear was born in London on the 12th May 1812 into a large family; he was the 21st child of Ann and Jeremiah Lear. His life was pitted with ill health, he suffered from epileptic seizures from a young age, partial blindness in his older years and fits of depression throughout. None of these ailments are reflected in his wildlife illustrations; the colours he uses are bright and vibrant, breathing life and character into the creatures he has painted. He recorded them in way that took longer, but the results are no less beautiful or detailed than a photograph.

The collection of the Natural History Society of Northumbria that is located in the Library includes two of Edward Lear’s original publications. These are his first book, ‘Illustrations of Parrots’ (1832), and ‘Gleanings from the Menagerie at Knowsley Hall’ (1846). Lear drew the animals depicted in these volumes by hand and from real live specimens. This was unusual as many of his contemporaries only drew from stuffed animals. This meant that they failed to grasp the mannerisms of the animals that come across in Lear’s work. His drawings were then copied using a lithographic techniques. Lithographic printing is based under the principle that oil and water don’t mix and was used as a way of printing multiple images from 1796. The prints were then hand painted and complied in books. 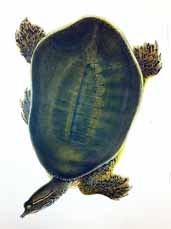 Lear’s pictures were being produced at a time of mass collecting of exotic creatures, the likes of which many people had never seen before. Apparently, Lord Stanley the 13th Earl of Derby, who commissioned illustrations of some of the animals in his Knowsley Hall Menagerie, had living collections of 1,272 birds and 345 mammals at the time of his death. These had been shipped to him by explorers, such as Joseph Burke. It’s no wonder he wanted to record them and show them off; Lear’s detailed artistry allowed this. On some of the birds you can see every feather! In fact, in this instance seeing the real illustration is better than a photograph of it; the one things that a photograph cannot capture is the scale of these beautiful images. Each page of the book is around 90cm long, with the illustrations taking up the vast majority of the page. 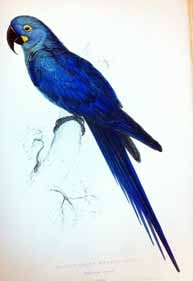 Not only does the library contain two of Lear’s original books, there are also reference books about his life, his work and more examples of his illustrations. Come and visit the library and see for yourself. Further information including opening hours and contact details are available on the Library website at www.greatnorthmuseum.org/library 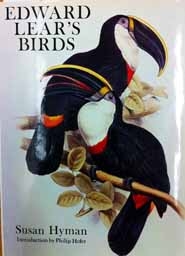