The Tank and the Officer in the Tower

This blog has been written by Colin Boyd, a volunteer (and good friend) who has been helping to catalogue the plans in our remarkable Vickers Armstrong collection.

Whilst working on the Vickers Armstrongs archive I came across a very good General Arrangement drawing of the Vickers Independent Tank of 1926. I decided to carry out some research on this relatively poorly documented tank little knowing that it would lead to a tangled tale of espionage and a very unprofessional spy. 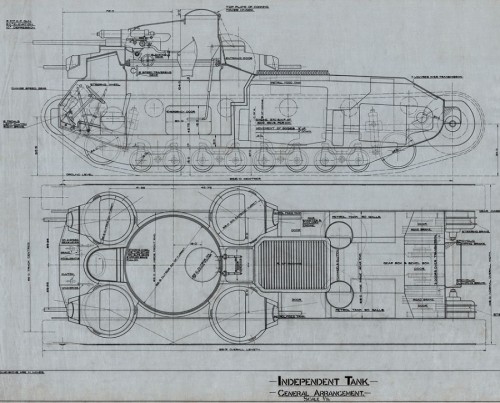 Ordered by the General Staff in 1924 the Independent was the last British example of the ‘Land Ship’ type of tank developed during the First World War for breaking through trench systems. The analogy with a warship was further enhanced by its multi turreted design with a heavy central armament surrounded by the secondary armament in smaller turrets. The large tank that was delivered to the War Office in 1926 created a stir in military circles and influenced heavy tank design in several countries. The Independent was 24ft. 11in. (7.59 mt.) long x 8ft. 9in. (2.67 mt.) wide x 8ft. 11in. (2.72 mt.) high and weighed 34 tons. Powered by an Armstrong Siddeley V12 petrol engine developing 370 h.p. it was capable of 32 k.p.h. on level ground and carried a crew of 8 (at a time when most tanks carried a crew of 2 or 3). The tank was armed with a QF 3 pounder gun in the central turret and 4 Vickers 0.303” machine guns in individual turrets at the ‘corners’. The left rear turret was larger than the others allowing increased elevation of the machine gun to provide some anti-aircraft capability. The arrival of this very large and advanced tank caused a flurry of industrial and military spying and the plans of the tank soon arrived in Moscow via an unknown route and in Berlin courtesy of Norman Baillie Stewart. 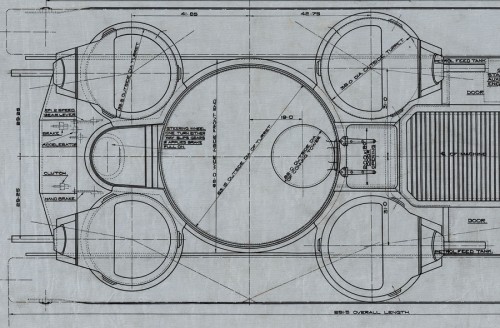 Baillie Stewart was born as Norman Baillie Hamilton in 1909 to a family with a long tradition of military service. After changing his name in 1929 he saw active service on the North West Frontier of India with the Seaforth Highlanders. He then transferred to the Royal Army Service Corps and returned to the UK in 1931. He was disillusioned with military life and was developing pro-German sympathies to the extent that he wrote to the German Consul in London offering his services. Having received no reply he travelled to Berlin, without permission, met German officials and agreed to become a spy. He forwarded details of an experimental automatic rifle, the A1E1 tank and organisational details of the army for which he received the princely sum of £90! When Baillie Stewart was arrested shortly afterwards it soon became apparent that he was a very poor spy. He had borrowed the information from a military library in Aldershot so it was easily traceable and in his pockets were scraps of paper with notes on routes to Holland to meet his handlers and telephone numbers.

When the Court Martial opened on 20th March 1933 he was charged with 10 counts of violating the Official Secrets Act. The newspapers had a field day and Baillie Stewart was dubbed ‘The Officer in the Tower’ as he was held in the Tower of London. In fact he made history as the last British subject to serve all or part of their sentence in the Tower as opposed to later prisoners who were either held awaiting trial or in transit. He was sentenced to 5 years penal servitude and on his release in 1937 he travelled to Austria and applied for citizenship. The Austrian government suspected him of being a Nazi and he was ‘asked to leave the country’. He returned to Vienna following the creation of Greater Germany in 1938 and ran a small trading company. He reappeared in the public eye at the end of August 1939 broadcasting propaganda in English from Berlin. Baillie Stewart continued with this until December 1939 when he was replaced by his deputy William Joyce (the infamous Lord Haw Haw). For the rest of the Second World War he worked as a translator for the German Foreign Ministry, lectured in English at Berlin University and broadcast occasionally. He was granted German citizenship in 1940. At the end of the war he was arrested in Vienna and returned to Britain to face trial.

The Security Services wanted Baillie Stewart to be charged with high treason but the Attorney-General only charged him with ‘committing an act likely to assist an enemy’. He thus escaped the fate of his successor William Joyce who was executed in Wandsworth Prison on 3rd January 1946. The Security Services then lobbied unsuccessfully for him to be sent to the Russian occupied zone of Germany where they knew he would receive short shrift. When the trial opened on 9th January 1946 the newspapers resurrected the ‘Officer in the Tower’ nickname from 13 years previously and it was used extensively in the associated headlines. At the end of the two day trial Baillie Stewart was sentenced to another 5 years penal servitude. This time, on his release, he moved to Ireland under an assumed name, married, raised a family and finally succumbed to a heart attack in a Dublin Street in June 1966. 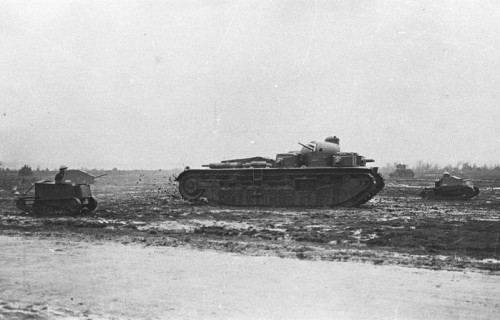 The A1E1 Independent tank was unfortunately not adopted by the War Office and all development and production orders were cancelled. This was purely on budgetary grounds as the tank itself had no major technical problems and was the largest and  most advanced armoured fighting vehicle of its time. Other countries which obtained details of the tank, by fair means or foul, used it as a basis for their own heavy tank development. In Russia this led to the T28 and T35 series of tanks, in France the FCM2C type was built and in Germany the Neubaufahrzeug was designed. The sole A1E1 built was used extensively for experimental research and development until 1935 when it was donated to the Tank Museum at Bovington where it remains on exhibition to this day towering over the other displayed tanks from the same era.

One Response to The Tank and the Officer in the Tower