The Story of Elizabeth Gould – An Extraordinary Bird Woman

Last month we looked at the visit to the north of England by John James Audubon, the esteemed American wildlife naturalist and illustrator. This blog considers the work of Audubon’s contemporary, John Gould and his wife, Elizabeth.

The nineteenth century was a remarkable period for the publication of high-quality ornithological books containing beautiful and detailed bird illustrations. This was largely due to the development of lithography, a new printing process that enabled artists to faithfully replicate in vibrant colour the original images that they had produced, often through the medium of watercolour.

One of the giants of this era of illustrated bird book publication was John Gould (1804 – 1881). Because of his prodigious work in the production of this type of material he became commonly known as the “Bird Man”. However, his story is not just that of one man working alone in order to achieve his vision. 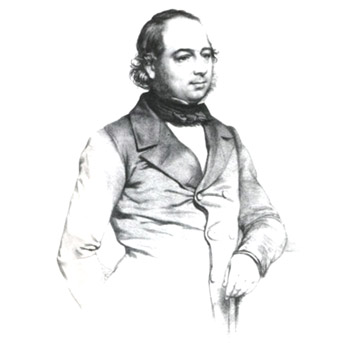 Arguably more than anyone else, including his contemporary John James Audubon, Gould succeeded in using lithography in his publications to celebrate the beauties of the world of birds. Gould’s skills lay in making use of  the most talented artists available at that time, including Edward Lear and Joseph Wolf and crucially his wife Elizabeth Gould. He coupled this with entrepreneurial flair and the instincts of a businessman, enabling him to publish a series of lavishly illustrated folios that were avidly collected by affluent enthusiasts, learned societies and libraries.

The library of the Natural History Society of Northumbria (NHSN), located in the Great North Museum: Hancock Library is fortunate to contain two of Gould’s most celebrated publications. These are firstly the five-volume work “Birds of Europe” published between 1832 and 1837 and secondly “The Birds of Great Britain” published in 25 parts between 1862 and 1873 which had 367 illustrations and attracted 468 subscribers, including Queen Victoria.

One of the most significant factors that Gould depended upon while achieving his spectacular status was the contribution of his wife Elizabeth, a figure who has become increasingly regarded as a key factor in the success of the “Bird Man”. 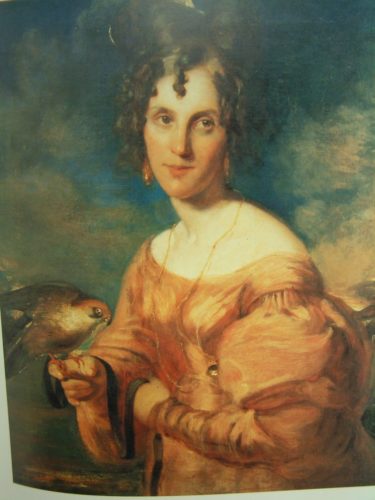 Elizabeth Gould (1804 – 1841) was born into a military family and as a young woman worked as a tutor of French, Latin and music. She also developed the skills that helped her to become an accomplished amateur artist. She married John Gould in 1829 when they were both aged 24.  Elizabeth began her professional life by producing ornithological drawings intended to supplement John’s letters to colleagues. John encouraged her to learn the technique of lithography and asked his collaborator, the young Edward Lear, to instruct her in this skill. Once proficient in this art form she created illustrations that built on John’s more rudimentary drawings. Early evidence of her artistic ability is prvided by her production of 50 lithographic plates for inclusion in Charles Darwin’s “The Zoology of the Voyage of H.M.S. Beagle – Part III Birds” published in 1838. These plates were not credited to her.

Of the over 3,300 lithographic plates that John Gould published during his publishing career around 650 were designed, lithographed and painted by his wife. One of Gould’s most spectacular and celebrated works was his “Birds of Australia” published between 1840 and 1848 in seven volumes,  it included descriptions and illustrations of 681 specimens of which 84 were painted by Elizabeth who was able to produce sketches from  live specimens. One of the most famous images that she produced was that of the Fairy Wren.  The Gould’s lived in Australia and travelled around this vast country while the arduous work on this massive undertaking was taking place. 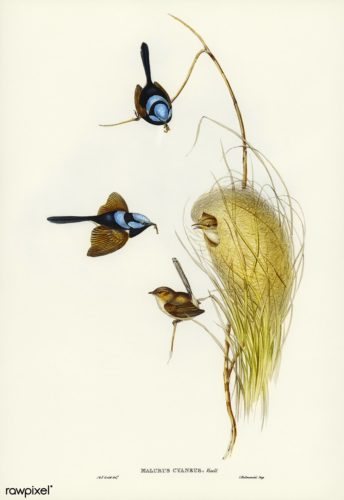 Elizabeth Gould returned to England with her husband and sadly on 15 August 1841 she contracted a fever following the birth of her eighth child and died at the age of 37. It was a severe blow to John to lose his wife, the mother of his children and also his artist. As a fitting commemoration posthumously, she had two Australian birds, Mrs Gould’s Sunbird and the beautiful Gouldian Finch named after her.

Contemporaries of Elizabeth Gould had realised the importance of her artistic contribution to ornithological illustration. Many years after her death, when her husband John Gould died in 1881, Edward Lear stated that “He (Gould) “owed everything to his excellent wife without whose help in drawing he had done nothing”.  The famous Northumbrian naturalist and illustrator John Prideaux Selby also observed that “I like (Elizabeth’s illustrations) as well as Audubon’s”. John James Audobon was the world-famous illustrator and publisher of the “Birds of America”

Though the NHSN library does not include a copy of “Birds of Australia” it does contain a first edition of Gould’s five-volume work “The Birds of Europe” which was published between 1832 – 1837. The production of the book required Elizabeth and John to travel extensively in Europe visiting natural history collections and observing and collecting specimens in the wild. Being able to see living, moving, birds enabled Elizabeth’s artistic talent to reach new levels. She began to depict lively interactions between males and females and increased movement in her figures. She produced 380 plates for this publication and had access to live caged birds from which to compose her sketches. This is when she established her signature style of ornate backgrounds and realistic shading was also realised. The lithographic process allowed for the depiction of more realistic textures including feathers and fluff. It enabled her to show lively birds of all shapes and colours performing mating displays, protecting their young and interacting with their environments. This was all a far cry from the “dead bird on a stick” approach to ornithological illustration of the 18th century and before. 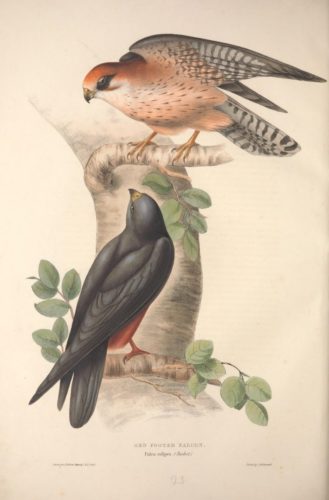 Because of the marvellous work that she produced in collaboration with her more famous husband Elizabeth Gould has left a permanent and tangible legacy of her short life and contemporary interest in her and her achievements is much in evidence. For example, a recent award-winning novel by Melissa Ashley titled “The Birdman’s Wife” has been published which tells the fictionalised story of her life.

If you would like to see original examples of the ornithological illustrations of Elizabeth Gould, you are welcome to visit the Great North Museum: Hancock Library. This contains the library of the Natural History Society of Northumbria where Gould’s “Birds of Europe” is part of the collection. The library is free to use and is open to everyone, although it is currently temporarily closed due to the Covid-19 pandemic.