In July 2017, Tim Shaw of Newcastle University and I visited local beaches between Blyth and Whitley Bay and made some recordings of the local sand ‘singing’.  Later that year, I travelled north from Newcastle to Arisaig on the west coast of Scotland for a trip to the isle of Eigg; I was excited by the prospect of experiencing the sound of the singing sands first discovered by Hugh Miller in 1844, as described in The Voyage of the Betsy. 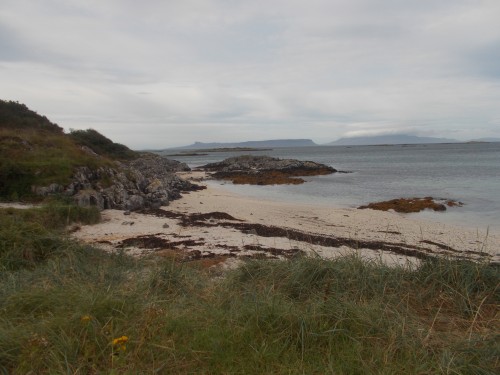 Here is an extract from Miller’s account of first hearing the sound of the sand in the Bay of Laig:

‘I was turning aside this sand of the Oolite, so curiously reduced to its original state, and marking how nearly the recent shells that lay embedded in it resembled the extinct ones that had lain in it so long before, when I became aware of a peculiar sound that it yielded to the tread, as my companions paced over it. I struck it obliquely with my foot, where the surface lay dry and incoherent in the sun, and the sound elicited was a shrill sonorous note, somewhat resembling that produced by a waxed thread, when tightened between the teeth and the hand, and tipped by the nail of the forefinger. I walked over it, striking it obliquely at each step, and with every blow the shrill note was repeated.’
(Hugh Miller 1858).

Inspired, I set out for Arisaig harbour to catch the ferry that would take me on the hour-long voyage to Eigg. 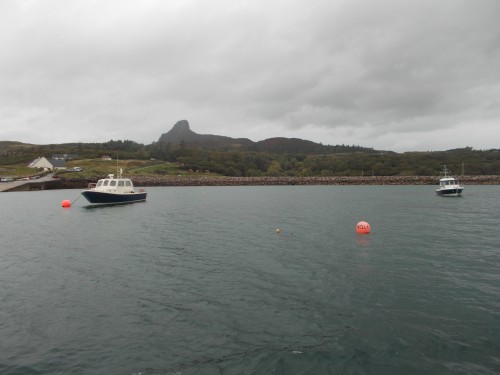 Once landed, I located the taxi driver (enjoying his breakfast in the nearby café) for the next leg of the journey.  On arriving at the small settlement of Cleadale, he advised me to follow the blue marks on the rocks to reach the Singing Sands. The weather wasn’t promising and I’d already been helpfully informed that I wouldn’t hear the sand sing today on account of the rain and mist. Undaunted I set off on foot along the rough path, observed from a safe distance by a group of curious sheep. 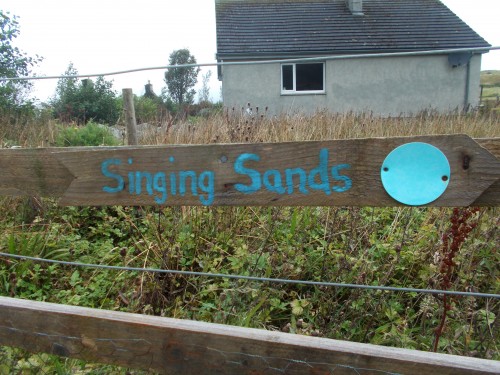 My destination was Camas Sgiotaig, a white sandy beach with fantastic views of Rhum, had the weather been fair.  Nevertheless, the views were amazing and there was not a soul in site.  Otters are known to visit the beach but I didn’t see them. 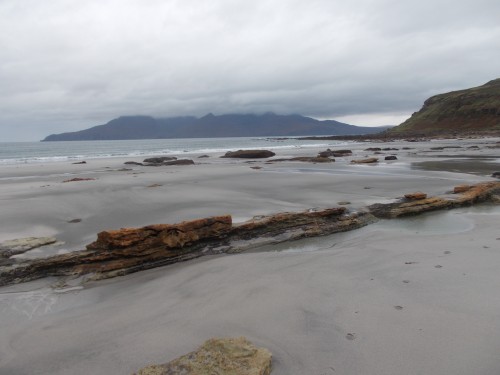 On the deserted beach with a view of Rhum

The rocks that I could see from my vantage point on the beach looked interesting; a number of dykes (igneous intrusions), one of which bore signs of having been cored for analysis, crossed the sand from the landward side to the sea.  The large nodules that the island is known for also looked intriguing.  However, time was limited before the ferry returned for the trip back to the mainland so I couldn’t allow myself to be distracted. 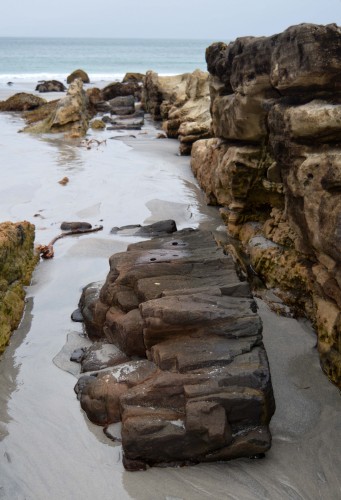 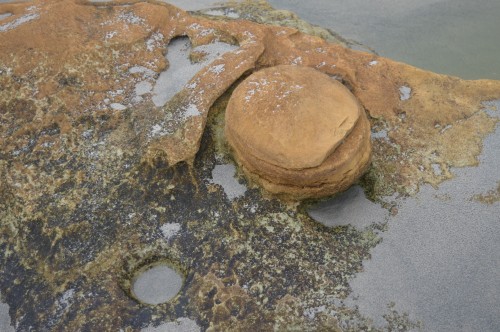 Large nodule on the foreshore

Recording the sound of the singing sands necessitated walking back and forth across the beach so that my feet scuffed across the surface of the sand, much as Hugh Miller had done so many years previously.  With a portable hand-held recording device I traversed the upper (drier) part of the beach.  As anticipated, the sand did not disappoint, producing a pleasing squeaky sound interrupted only by the sound of the waves crashing on the beach and an occasional sea bird. 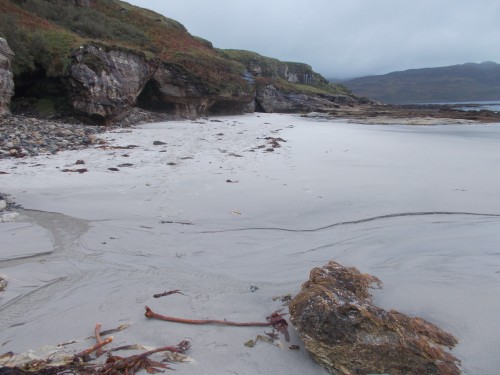 All too soon it was time to walk back past the sheep and blue-painted rocks for the short taxi-ride to Galmisdale; missing the ferry could have left me stranded on Eigg for days, not an unpleasant prospect.

Here is one of the recordings of the Singing Sands: