The Return of the Samurai

Our awesome exhibition “Other Worlds: The Art of Atomhawk” had barely been open for two weeks before we learned that we’d have to shut the Great North Museum: Hancock down for the safety of visitors and staff alike, as we try to combat the COVID-19 pandemic.  As we won’t be able to experience and enjoy the exhibition for a little while, I thought I’d try and bring the displays to our visitors via a virtual format – the humble blog post.  This week, I’m looking at the mighty Samurai armour exhibit.

For those of you who aren’t familiar with Atomhawk’s work, I’d strongly recommend you have a look at their website and see some of their designs (https://atomhawk.com/concept-art).  With headquarters based in Gateshead and Vancouver, the Atomhawk designers  work with movie studios and game developers to produce amazing conceptual art.  Many things can provide inspiration for these talented artists, not least some of the weird and wonderful objects we have within the collections of the Great North Museum.  For the realms of sci-fi and fantasy, Japanese Samurai warriors can be a wonderful inspiration for an imaginative artist who wants to create a new fighting character.

So it seemed only fitting that we display some of this fantastic armour among the Atomhawk artwork- which also gave me an unexpected opportunity to learn more about this fantastic museum piece. 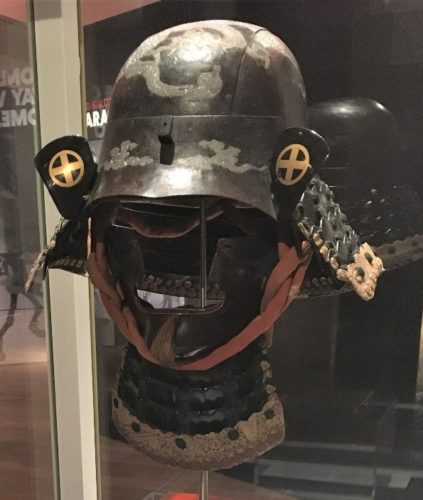 Samurai armour on display in the exhibition “The Art of Atomhawk”

Who were the Samurai?

The Samurai were the warriors of pre-modern Japan. They followed the ethic code of bushido – “the way of the warrior,” which stressed loyalty to one’s master, self-discipline and respectful behaviour. The 15th and 16th centuries saw widespread civil war throughout Japan but the dawning of the 17th century brought about the Japanese Ed period which ushered in a time of peace. During this time, the importance of martial skills declined with many Samurai becoming bureaucrats. In 1868, Japan’s feudal era came to an end and the Samurai class were abolished shortly afterwards.

The helmet we’ve chosen to display is known as a zunari kabuto, which simply means “head shaped helmet”.  This type was developed during the Japanese civil wars that occurred during the 15th and 16th centuries. As they were light, effective and simple to construct, they became popular for daimyos (feudal lords) to equip their warriors with.  Our helmet probably dates to the Edo period, which lasted from 1603 – 1868, although we can’t pin the date down further than this with any confidence. 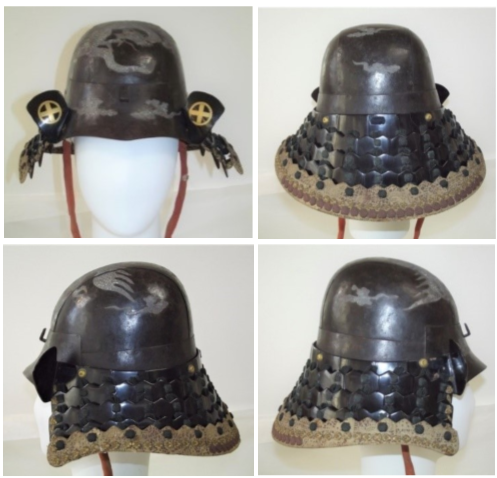 The helmet has some striking distinguishing features.  An inlaid decoration of a dragon and clouds can be clearly seen.  Beautifully designed, it may have helped to set the wearer apart.  Alternatively, the inlay may have been added at a much later date to help the armour appeal to the taste of a western collector. 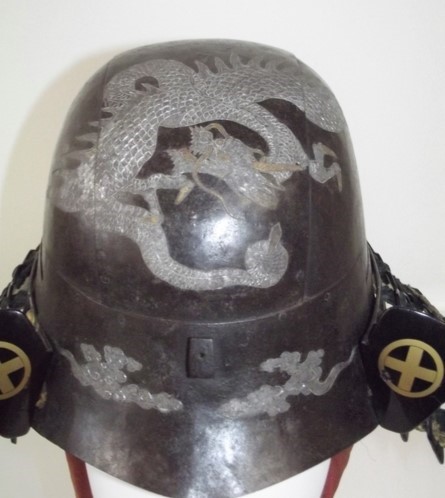 Close-up of the fukigayeshi and mon heraldic devices

What is also distinctive about our helmet is the two black-lacquered protuberances on the sides known as fukigayeshi.  These were designed to stop a sword from slashing down to the neck area, and the ones here appear to be displaying a mon– a crest symbol, similar to a European heraldic device.  This mon is associated with the Shimazu clan, the daimyo of what was then the Satsuma province in Japan (an area that is situated on the modern day southern Japanese island of Kyushu).  We can see the same mon on other pieces of Samurai equipment- the Royal Armouries in Leeds has a beautiful Japanese tanto (dagger) displaying the same symbol.  Understanding the crest gives us a fascinating insight into the previous owner of our helmet.  Was he a retainer or even a family member of the Shimazu? We can’t be sure, but it’s certainly compelling speculation. 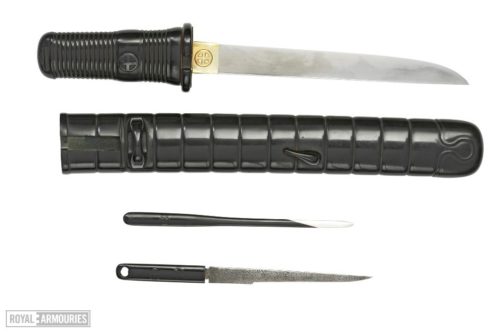 The second piece of armour we have on display here is the facemask or men yori, an iconic piece of Samurai equipment.  Men yori often have exaggerated features, with some attempting to depict demons or evil spirits.  Many (including ours) have gold teeth and facial hair  to present a fearsome appearance.  The inner surface of the masks are sometimes covered in a red lacquer to give the Samurai a red, warlike appearance.

The armour of the Samurai is one of the most recognisable of all ancient warriors.  While the traditional Samurai way of life all but ended in the 19th century, the remains of their equipment and weaponry are cared for in collections and museums across the world.  As a source of inspiration, the Samurai warrior is a perfect muse for artists.  Here at the GNM, the Samurai’s return has been a welcome source of stimulation and creativity not just to the Atomhawk artists, but also the curators and conservation staff who have worked to recreate some of the splendour of the ancient Japanese feudal era. 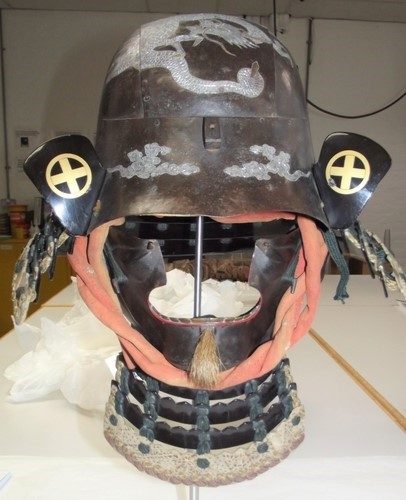 Close-up of Samurai armour after conservation work, ready to go on display 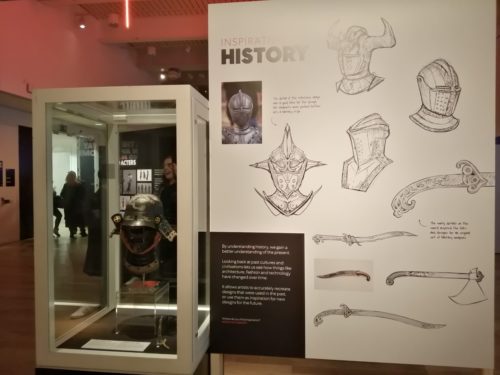 On display in the exhibition “The Art of Atomhawk”