The Mackreths and Thunder Thursday 1837-style

The artist Harriet Mackreth lived with her family at 3 High Swinburne Place in Newcastle, just off Westgate Road. The house held her parents, her two older sisters and her brother, while the 1841 census also mentions two female servants of about 25 and 15 years old. The building had three floors, plus basement and attic rooms for the servants, with two or three rooms per floor. She lived there for almost 30 years and must have painted many of her portrait miniatures within its rooms. 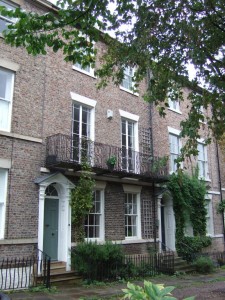 In 1837 the house made it into the newspapers, as a result of a heavy thunderstorm:

‘The thunder was more than usually loud, and the lightning was very vivid at Newcastle on Sunday. Rain fell also in perfect torrents. Indeed, we scarcely ever remember so much to have fallen in so short a space of time. The chimney of Mr Wm Beaumont’s house in Greenfield Place, Westgate, was struck by the lightning, and the bricks fell through the roof of Mr Mackreth’s house, the electric fluid then entered the servant’s bed-room, singed a gown that was hung up, and made several holes in it, and coloured the wall; passed along the bell wire, melting it as it went continuing to follow the wire into the drawing room; it then found a passage into the adjoining house … Mr Mackreth’s servant was thrown down in the kitchen, but was not hurt; neither Mr and Mrs Mackreth sustained any injury. A strong smell of sulphur was felt after the lightning had passed through the house’ (Reading Mercury, 29th July 1837).

An engraving of one of Harriet’s portraits is currently on display at Segedunum Roman Fort as part of the Wall Face exhibition.

One Response to The Mackreths and Thunder Thursday 1837-style