The legend of St. Cuthbert – a journey of discovery by Kate Buckley

My name is Kate Buckley and I am a third year History student at Newcastle University. I also act as a Library Volunteer in the Great North Museum: Hancock Library where I work with the fascinating collection of books that are available for anyone to use. 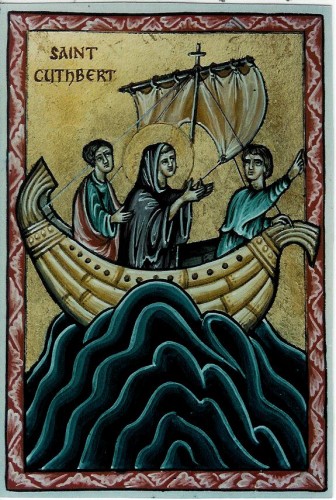 The traditional story of St. Cuthbert concentrates on the failure of his body to decompose after his burial, and is used to evidence St. Cuthbert’s saintliness. This saintliness has been reinforced by the tale of Cuthbert’s life at Lindisfarne, where he worked as a spiritual healer, a guide and a Bishop, before retiring as a hermit on the ‘Inner Farne’ island, living in ‘isolation’ (although he did receive regular visitors) until his death in 638 AD. The legend tells that fearing Viking and Danish raids, the monks of Lindisfarne fled with the relics and body of St. Cuthbert to a number of locations. These included Melrose, Chester-Le-Street and Ripon before a site was reached in Durham which became his final resting place and where the Cathedral was subsequently built. After this point the attention that has been paid to St. Cuthbert has mostly been focussed upon his cult of saints. However, I would argue this concentrates upon the spirituality of St. Cuthbert; whereas the information I have uncovered considers the remains of the body of St. Cuthbert, and continues this fascinating story into the 19th century.

In the library of the Society of Antiquaries of Newcastle Upon Tyne there is a first edition of a book by James Raine, titled “An appreciation of St. Cuthbert: with an account of the state in which his remains were found upon the opening of his tomb in Durham Cathedral in the year MDCCCXXVII”.

This book details the excavation of St. Cuthbert’s tomb which occurred on 17 May 1827. Raine (the Librarian for Durham Cathedral), provided an in depth account of the excavation, and I argue Raine’s account is of interest for any archaeologist or enthusiast alike; after all, Raine was the first to lay eyes on St. Cuthbert’s skeleton since 1542!  However, once you delve into the history of this excavation a story of deception and disbelief is revealed. Raine,  a man so determined to disprove the ‘magic’ surrounding St. Cuthbert, conducted this illegal excavation during the twilight hours before anyone could awaken and stop him. I believe this is one of the reasons Raine’s work has been generally dismissed by historians; whilst yes it may be riddled with inaccuracies and biases, I think anyone with an inquisitive mind would be wrong to be so dismissive. After all, Raine, a man who declared his excavation “completely disproves the tale of centuries, invented for interested purposes in a superstitious age—the incorruptibility of St. Cuthbert”, represents a time of growing disbelief towards the supernatural. So I advise anyone with an interest in the legacy of St. Cuthbert and also those in social history to visit the GNM: Hancock Library and read this text. It reveals more than one might expect. 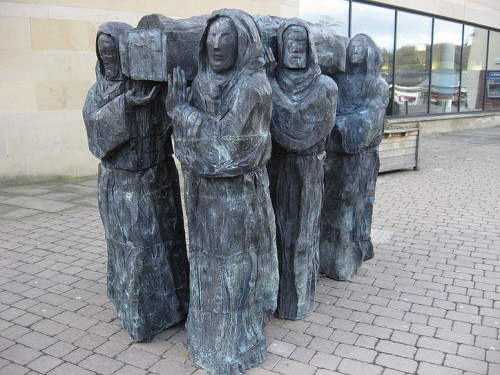 As an added bonus, this copy of Raine’s appreciation contains a letter written by James Raine to J.G Hodgson – the man kind enough to donate his copy of the book to the SANT collection (housed at the GNM: Hancock Library). The letter reveals another side to Raine. It shows he was not just a man of academia, but also provides an insight into the life of Raine as the churchwarden: an ‘ordinary man’. As a History student, I made my best attempt to transcribe the letter; alas it is a skill I have yet to master and therefore I have been unable to fulfil my task (but I am still trying!). So I invite you to not only venture into the tome, but to read the letter and attempt to identify and then transcribe the words that James Raine took the time to write to his “dear Hodgson.” 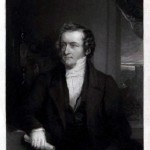 I thank your son (?) very sincerely for his admirable index,  and send although I fear you will think but late the head and tail of my book. I shall be thankful for your candid remarks upon this tract at your leisure as they may be of use to my evidence (?).

Meldon came safe. It makes a very nice book. I will settle with Walker when I am at Newcastle and I shall be glad to give copies to Wailes, Lenon and the very sensible man Coxon (?) of the garden house my perpetual churchwarden.  I am going away into Yorkshire (?) on Wednesday but shall return home again on Saturday after which I intend to spend a day or two with you at Whelpington.  I shall perhaps travel northwards in the beginning of next week.

The Chancellor as you will see has given me the Little Living here of which I have for some time been Curate. I am now safe inn the event of my losing (?) the Chief  ………… (?).

If I have sent you too much or too little of St. Cuthbert be kind enough to tell me so. In the former cas you must be so good as send back the spare sheets otherwise a copy will be left here imperfect and if it should happen that you are still are imperfect no time shall be lost in rendering (?) you complete.  With ….  ….. ….. …. (?)  Hodgson believe (?) me yours most faithfully. 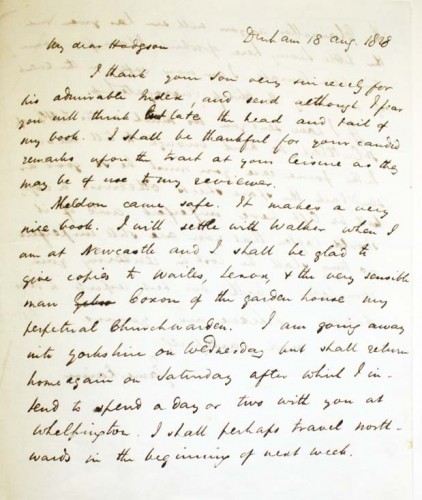 If this tome is not enough to entice you, the Great North Museum: Hancock Library contains a number of books and articles pertaining to St. Cuthbert.  These include Connor O’Brien’s “Attitudes to St. Cuthbert’s body during the nineteenth century” in Northern History, September 2016 and C.F. Battiscombe (ed) “The relics of St. Cuthbert”.

O’Brien’s work is fascinating, as it provides context to the life of James Raine and an explanation for his actions on 17 May 1827. O’Brien explores alternative accounts of this night. One of the most outlandish alternatives is the claim that Raine was found standing on top of St. Cuthbert’s bones attempting to destroy them. This certainly paints an even darker picture of the excavation undertaken by Raine. However, whilst these alternatives are interesting, the value of O’Brien’s work is that he places the excavation in context and goes beyond what those involved wanted us to see. In my opinion, O’Brien was successful for he maintains Raine’s actions were part of a larger picture. O’Brien argues the excavation was not a quest for truth, but part of an ongoing picture in England of Protestant v Catholic, as proving a Catholic Saint to be ‘false’ was an apt way for the Anglican Church to assert its authority over the Catholic Church. This certainly provokes further interest into St. Cuthbert’s story as it proves that his saintliness and the impact he had on society remained strong.

As an alternative to O’Brien, Battiscombe’s collection is a must for anyone interested in the more quirky side of history. It contains fabulous images of some of the surviving relics of St. Cuthbert. For instance you can see St. Cuthbert’s comb, along with artist renderings of what St. Cuthbert’s tomb would have looked like in the 7th century.  The collection of  articles goes further than simply describing each relic; it analyses each one, therefore enabling any interested party to learn the significance of these archaeological pieces, which offer invaluable insight into the past. More importantly, it allows us to go beyond the legend of the saintly St. Cuthbert, to delve into the everyday life of the pious man. 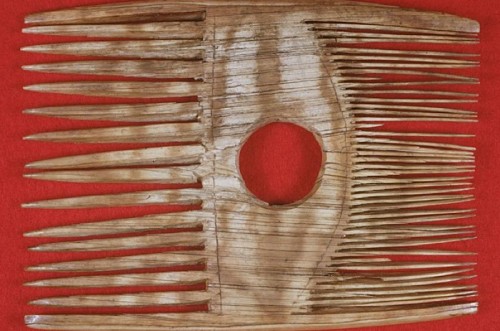 It is clear the story of St. Cuthbert is a fascinating one, and that his place in history remains strong.  Therefore, even if you are not a history buff, the events surrounding the life and death of St. Cuthbert should be known as it is a story that is enshrined in the identity and heritage of the North East of England. And, after all, he is our patron Saint.

The Great North Museum Hancock Library is located on the second floor of the Great North Museum.  It is free to use and is open to everyone. It houses the collections of the Natural History Society of Northumbria, the Society of Antiquaries of Newcastle-upon-Tyne and Newcastle University’s Cowen Library. For more information please visit https://greatnorthmuseum.org.uk/collections/library-and-archives

3 Responses to The legend of St. Cuthbert – a journey of discovery by Kate Buckley