Keeper of Archaeology, Alex Croom takes an in-depth look at the Lead Shrine, on display at Segedunum Roman Fort & Museum. 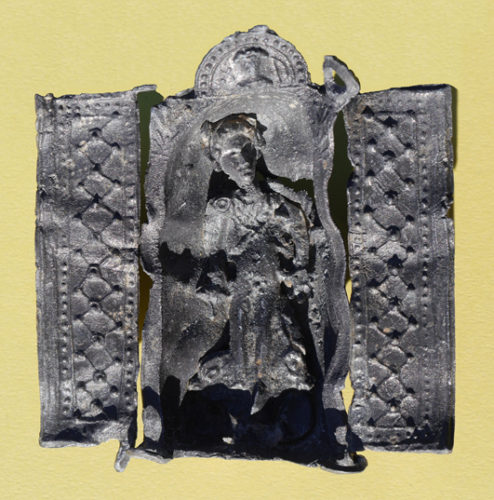 This lead shrine from Wallsend Roman Fort is one of only three in Britain that still retain its central figure, and the only one complete with its doors. It is made of five separate elements, each originally cast in a clay mould. The figure inside is Mercury, the god of trade and commercial success, story-telling, communication and anything requiring skill and dexterity, as well as the herald and messenger of the gods, and was therefore the patron of merchants, carriers, travellers and thieves. Mercury was one of the most popular gods in Britain and there is evidence for a temple dedicated to him at Wallsend. 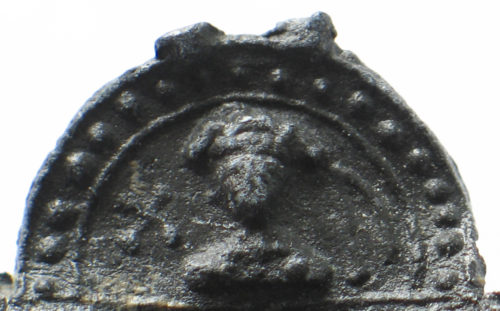 The pediment has a bust in the centre, with an unusual hairstyle or head-dress. To the right is a whip, with an upright handle and curved thong. This is a symbol of the sun-god Sol, who was often depicted driving his chariot across the sky. To the left is an X with rounded ends to the bars. This could be a simplified wheel symbol, again referring to Sol’s chariot, but might be a star from the night sky, as examples of stars with just four arms are known. While most stars have pointed rays, there are also some with expanded ends, as here. 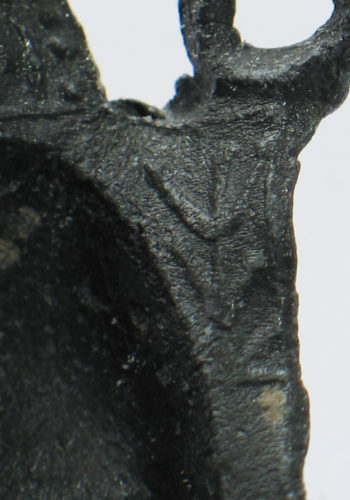 Near the top of the niche on both sides is a simplified plant or branch. This could be a palm branch, a symbol of victory and peace, but as the fronds have expanded ends it might be a different symbol of peace, the olive branch, instead. 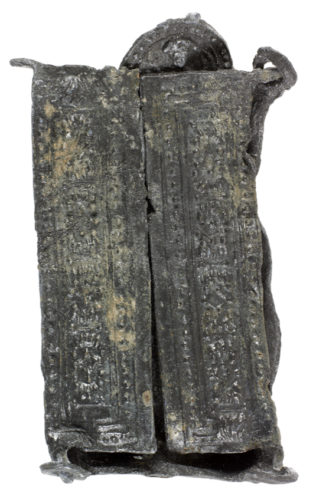 The doors have an unusual hinge arrangement, with one vertical and one horizontal pivot. As the lower hinge loops are bent out at 90 degrees they work best with the vertical pivots. There was no way of fastening the doors, although as the doors are decorated on both sides they were clearly meant to be closed at least some of the time. 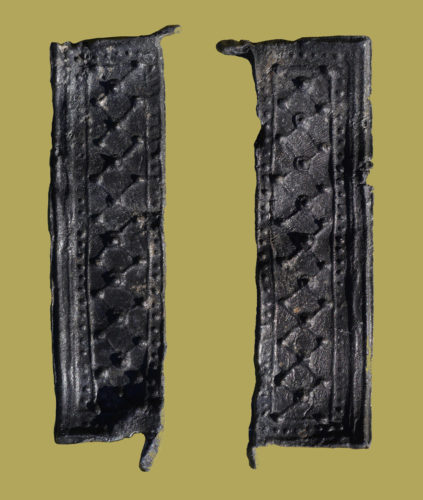 The shrine was found in a modern layer during excavation and unfortunately no record was kept of the relative position of the different pieces. A drawing of the doors made soon after discovery seems to suggest that this was the interior side. Although there is extensive decoration it would have required only a few tools to make in the mould; just a pointed stick and ruler to make both the lines and smaller pellets, and a stick with a flanged tip for the larger pellets down the centre. 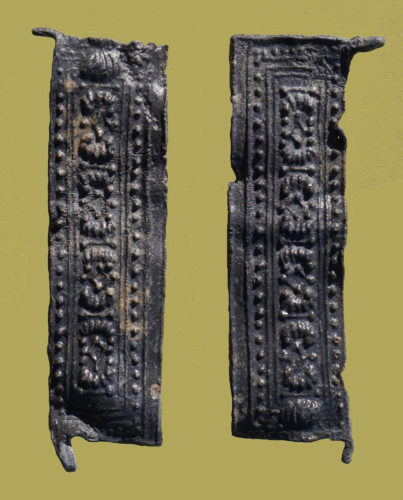 As well as the pointed tool for the lines, the pellets and the shapes made by pellets joined by lines, this face of the door also required a stamp in the shape of a shell and another in the shape of a ribbed crescent, perhaps intended to be another stylized shell. The decoration on this side is not fully symmetrical, with the shell shape placed at the top of one door and the bottom of the other, which was presumably a mistake during the mould-making. This face, with the more elaborate decoration, appears to be the side visible when the doors are closed.

The figure is flat and one-sided and has a tab at the bottom, in the manner of a modern cardboard cut-out figure. Presumably when the shrine was bought the buyer could pick out the figure of the deity they wanted and it was fixed in place within the shrine. The male figure stands with one hand with the fingers out-stretched while he holds a pouch of money in the other. Mercury’s purse can come in all sorts of shapes, but some, like here, are diamond-shaped. 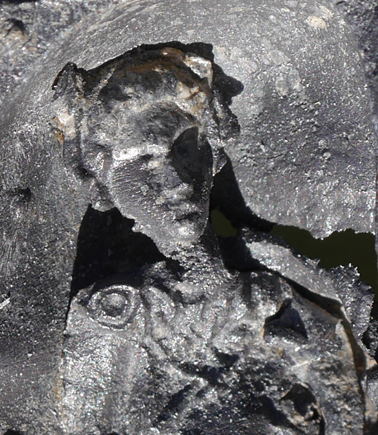 Behind his curly hair can be seen the plain brim of a hat; this has two projections, the one on the left surviving better than the one on the right. This is a traveller’s hat with added wings, a common attribute of Mercury in his roles as a messenger and the god of travellers. The figure is naked apart from a cloak, which is a typical for Mercury. His cloak is fastened on his right shoulder with a large brooch with a circular central setting, with the rather confused folds of cloth hanging down in a V-shape on his chest. 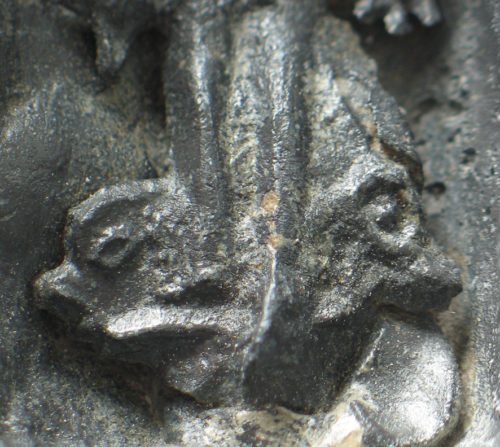 At Mercury’s feet to the left is a dolphin and to the right a hippocamp wearing a bridle, with the rein rising upwards. The hippocamp is a sea-horse, a creature that was half horse and half fish. Neptune used them to pull his chariot, while individual examples were ridden by Tritons (mermen), Nereids (sea nymphs) or occasionally Cupids. Such creatures were usually associated with water deities rather than Mercury, and their presence here can be interpreted in various ways. Dolphins were associated with life and death as they carried souls to the afterlife, which was a role also carried out by Mercury, so the two creatures may represent this voyage of the soul. Alternatively, as dolphins were also celebrated by the Romans for being friendly to humans and commonly saving drowning men, and hippocamps were creatures of the sea, their presence here could relate to Mercury’s role as the patron of travellers. Perhaps the artist wanted to emphasise Mercury’s help for people travelling by sea in particular.

The back shows the bumps and tears that have damaged the shrine. The line running down part of it is a mould seam where two pieces of the mould used to make it met. Usually this would be removed with a file. 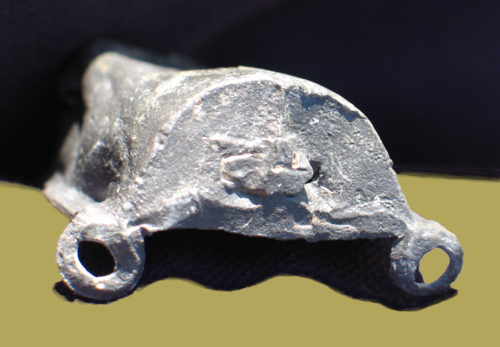 One end of the rectangular hole in the base can be seen, with the rest of the slot obscured by the folded tab of the figure that has been fed through it. This holds the figure of the god in place.