‘The Lamentation’: A Winning Formula 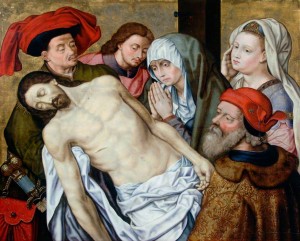 Sometimes if you find a winning formula, there seems little point in changing it. This could be said for certain painting compositions, some of which have been used by artists for hundreds of years. Michelangelo’s Pieta, for example, was so popular that its effect can be seen in painting and sculpture for hundreds of years, still weaving its way into art today. 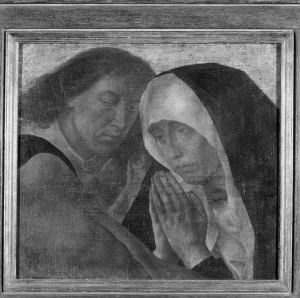 Demonstrating this devotion to a composition is The Lamentation, an oil painting on panel owned by the Hatton Gallery. Bought for the gallery’s permanent collection in 1957, the design is a copy of a very popular painting by Hugo van der Goes, one of the most successful Netherlandish artists of the 15th century. The Lamentation shows Christ after being taken down from the cross, his body stiff and deathly pale, angled against the upright figures of mourners (including the Virgin Mary, John the Baptist and Mary Magdalene) to create a dynamic design of near-geometric lines and shapes.

The original, painted around 1475, has been destroyed, although what is thought to be a small fragment can be found in Christ Church, Oxford. Out of the many existing versions of van der Goes’ Lamentation, a handful have been recognised as being close to the original, one of which can be found  in the Rijksmuseum, Amsterdam. The Hatton version is likely to have been created over 100 years after the original, most probably by an artist who didn’t see the original composition, and instead worked from one of the many replicas. There are some interesting variations from the original, including Christ’s cross being visible behind the Virgin Mary, and a rich, red velvet bag in the left foreground. The general composition, however, including the positioning and expressions of the figures, remains true to the original. The idea of replicating a painting didn’t once hold the negative connotation that it does today, and the painting plays an important part in demonstrating the continued trend for representing The Lamentation more than a century after the original, also helping to show the subtle changes in design introduced over the years.

Part of the reason van der Goes’ painting was so popular could be because Albrecht Dürer, an important artist from Renaissance Germany, reserved high praise for the painting, recording his sighting of the work in his diary. The painting also tells an interesting tale of religious trickery: Around 1580, when Protestant reformers were storming through churches destroying richly-gilded and extravagant religious effigies typical of Catholicism, it is said that van der Goes’ painting was hastily covered with a layer of removable paint. In order to fool the Protestants, the Ten Commandments were scrawled atop the paint, giving the impression of approved pious simplicity. I like to imagine a gang of protestant reformers striding through a church somewhere in Bruges, nodding in approval at an apparently humble version of the Commandments, whilst secretly a beautiful and rich painting lay hidden underneath the surface.

The Lamentation will be shown as part of the Hatton’s Winter display of Old Master paintings, many of which have been subject to conservation treatment or reframing. The exhibition, called ‘Framing Icons’, opens at the Hatton on 7th December, and runs until 9 February 2013.

One Response to ‘The Lamentation’: A Winning Formula