The importance of ‘Invitations to Play’

Today I read with interest of Toddlers’ Choice at the Whitworth: a project in which toddlers were invited to vote for their favourite artwork from a selection. They were also presented with sensory play themed around the favourite artworks they’d voted for, many of which featured bold colours and pattern. 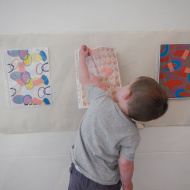 Toddlers’ Choice at the Whitworth

It got me thinking about the Reggio Emilia-inspired philosophy and the importance it places on creating ‘invitations to play’. This is the creation of an open-ended play opportunities – for example, presenting creative materials in enticing ways, or setting up a small role-play area at home. The items used needn’t be new to the child; the idea is that by simply presenting them in an inviting or different way, the child’s imagination is sparked. It can be fascinating to see how children respond, and there’s no right or wrong way to do it. Setting up ‘invitations’ like this may challenge you to play in new ways, or to offer less instruction or supervision than usual. If you’re interested in setting up your own ‘invitation to play’ you may like to have a read of The Imagination Tree which has some good tips for setting up such play opportunities.

I’ve been setting up lots of different ‘invitations to play’ lately, all of which are designed to offer creative ways to engage with the exhibitions. For example, I’ve been working with the Matov Children’s Centre to engage families from the local Orthodox Jewish community in the gallery. We had a look around the exhibitions and then played with various creative materials, inspired by artworks we’d seen. All of the playthings were carefully chosen so none offered only one way to engage – rather they should offer multiple, open-ended ways of interacting, to be determined by the individual. Below you can see a shiny sculpture on display at the Shipley, with a big pool of scrunchy reflective foil in the foreground. This ‘invitation to play’ was used in many different ways; some children enjoyed the sounds; others were fascinated by layering it; and many dived into it or hid amongst its layers. By engaging the children in looking at the sculpture, discussing its qualities, and then inviting them to play amongst a similar material, their imaginations were fired and they were able to really connect with the artwork in ways that simply looking didn’t offer. 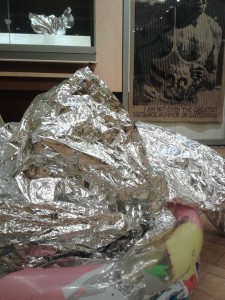 A sculpture-inspired ‘invitation to play’ 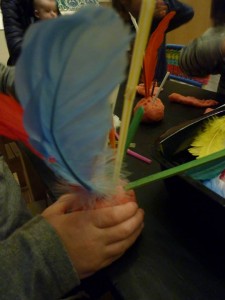 Play dough with various items such as straws, feathers and lollipop sticks also offered an enticing play invitation; some children were concerned with marking patterns in the dough; others experimented with how many items they could stand up in it; and a few were more interested in the items themselves and how they could be fitted together (for example, putting straws together to make one giant straw). By deliberately avoiding presenting an activity where everyone made a recognisable ‘something’, we created an environment where the children could do anything: an empowering creative lesson.

It’s often a requirement of the art gallery that artworks aren’t touched, making tactile play opportunities even more important for (otherwise frustrated) little fingers. This chance to ’embody the artwork’ can be hugely interesting for the child. Below is a video of a research project by The Carousel Project and the University of Exeter, which explored creative input into Early Years development. You’ll see here (at about 3 minutes, 40 seconds in) a really fun and memorable way of engaging young children in printmaking, using the whole body to aid their understanding of the artwork.

In a few days, I’ll be running ‘Creative Baby!’ session 3, which I’m sure will present many invitations to play for both adults and children. I look forward to seeing how these young creatives engage with the invitations presented to them, and how they will surprise us!