“The ordinary course of museum work has been disturbed by various side-winds connected with the war’’  – E. Leonard Gill, curator of the Hancock Museum 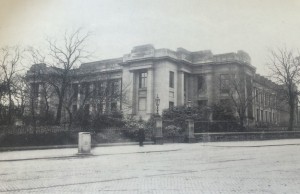 To say that the First World War disturbed museum work would be an understatement. The conflict deeply damaged the Natural History Society of Northumberland, Durham and Newcastle upon Tyne and its museum, a position from which it would not recover until the late 20th century. The war had a detrimental impact on the Society’s finances brought about by the huge loss of members who had fought at the front. Museum specimens were poorly preserved as a result of widespread fuel shortages, as it became impossible to maintain the necessary temperatures to preserve the collections. Damp and mould became a problem throughout the museum, damaging much of the collection. On top of this, Armstrong College was requisitioned as a military hospital and as a result, many of its classes took place in the Hancock Museum, interrupting regular work. A further blow was the lack of expertise as the Curator E. Leonard Gill left to volunteer for the Friends’ Ambulance Unit, taking him away from the museum from 1915 until 1919. Gill was a Quaker and a conscientious objector on religious grounds, but he served his country on the ambulance trains at the front.

Tragically, the greatest impact of all was the sad loss of a whole generation of young North East naturalists. Numerous Society members fought in the conflict, many of whom were killed in action or died of their wounds. As noted in T R Goddard’s History of the Natural History Society… 1829-1929, “it is impossible to name all of them”. Sadly there is still no published Roll of Honour for the members killed during the war.

“Several of the younger members of the society, men of promise and ability, have made the great sacrifice during the year under review” – Report of the Council 1916-1917

The saddest losses of all occurred in the year 1916 at the infamous Battle of the Somme. James Leadbitter Knott, son of Sir James Knott, was killed on the first day of the battle on 1 July. Knott had been a well-respected member of the Natural History Society of Northumbria from 1906 until his death. 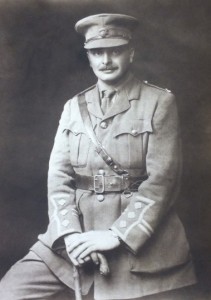 The deaths of Hugh Vaughn Charlton and his brother James McFarlane Charlton were noted by the Society as both brothers had been keen naturalists. John was a promising taxidermist, and had even been likened to John Hancock. Hugh was a gifted artist, focusing his talents on painting birds and other wildlife in the region. The Society’s archives hold a collection of his paintings and drawings, including a watercolour painting of the grounds of the Hancock Museum. John was killed in the Battle of the Somme, on 1 July 1916 which also tragically marked his 25th birthday. Hugh was killed just a week before his brother, after being struck by a bomb from a trench mortar on 24 June 1916, near Wytschaete. After the deaths of the two brothers, their natural history collection, which included over 50 mounted birds, was bequeathed to the Hancock. 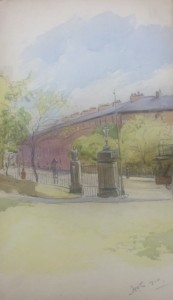 Before the outbreak of war in August 1914, the Society had begun work on an Endowment Fund to assist with repairs to the museum. With the declaration of war against Germany on 4 August 1914, the fund was suspended. This significantly weakened the financial position of the museum resulting in a decision to raise admission prices to sixpence per adult and two pence per child in 1922. The Curator’s Reports throughout the war show a progressive fall in visitor attendance and donations. The loss of members and reduced interest in natural history further harmed the financial position of the Society’s museum, which would only recover later in the century when Newcastle University entered into an agreement to lease the building and collections. By mid-1915, even greater hardship occurred, with the deployment of the Curator E Leonard Gill to the front. His father, J J Gill was employed as Deputy Curator but he and his staff where ill equipped to maintain a financially challenged museum.

With the outbreak of war, Armstrong College (now Newcastle University) was immediately requisitioned by the government in order to be used as a military hospital. The First Northern General Hospital was mobilised in 1914, with an initial provision for 540 beds but by 1917 this had increased to more than 2,100 beds. In response to this, the Society offered the college the use of the Hancock Museum in an effort to minimise disruption to teaching. Zoology, botany, geology, mineralogy, fine art, and arts and crafts classes took place at the museum and this interrupted regular museum work. The library and Curator’s office were used by the college, leaving museum staff with limited space for day to day conservation of the collections. Although the museum was not commandeered for use as a military hospital there had been a three day warning in place and in September 1914, the Curator, Gill, had planned which specimens would be relocated to the store room should the museum be used as a hospital. The uncertainty that this created directly inhibited progress in museum work and maintenance. Armstrong College returned to its own buildings in October 1919, paying the museum £250 for expenses. 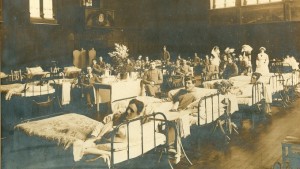 During the war, the Society was forced to cancel many of its lectures. In the report of the council from 1915-1916 it is noted that due to “the possible danger from aircraft which might occur where a number of people assemble under one roof, it was deemed inadvisable to hold any lectures during the winter”. Lighting was regulated because of the risk it posed during possible air raids. The German military made use of Zeppelin aircraft leading to the deaths of over 500 people in Britain. More than 20 air raids occurred in the region, possibly attracted by the munition and ship building industries on the banks of the River Tyne. On 15 June 1915 a Zeppelin L10 bombed Wallsend, Hebburn Colliery and Jarrow, killing 17 and injuring over 70 people.

The final regular museum talk took place on 9 December 1914 and was poorly attended, due to the decline of interest in natural history as a result of the war, and the fear created by air raids.

However, despite the huge war related difficulties experienced by the Society, the 86th meeting of the British Association was held at the museum in September 1916. The Report of the Council from the same year describes this as a “bright and noticeable feature in the life of Newcastle during 1916”. The meeting mainly focussed on educational and scientific interests but a reception was held on 6 September at the Laing Gallery by the Lord Mayor of Newcastle, and the museum was opened to the visitors of the meeting.

Ultimately, the First World War inherently damaged the position of the Hancock Museum and the Natural History Society, creating uncertainty which would only intensify during the Second World War. During the four year conflict, any progress for the museum or Society was halted and by 1918 its financial position was untenable. This was exacerbated by the absence of the Curator, E. Leonard Gill from 1915-1919.  However, the most profound impact of the war on the Society was the loss of members, many of whom were killed in the conflict. As a result, a generation of naturalists were lost, threatening the survival of the Society, the Hancock Museum and its collections.

Thankfully, both the Society and its museum, now the Great North Museum: Hancock, have survived into the 21st century and are very successful in their own rights. The study of natural history has never been so popular and the Society has a strong base of active members while the museum is a hugely popular visitor attraction.