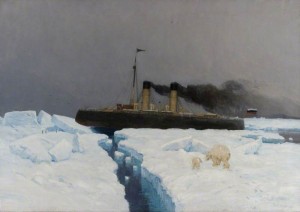 The icebreaker Ermack was the strongest ship in the world in its day. It was built in 1898 at the shipyard of Armstrong Whitworth & Co. at Low Walker on the Tyne for the Russian government. The Ermack (also known as the Yermak, Russian spelling Ермак) had a very long career, continuing until the 1960s. This picture of the Ermack breaking ice in the Artic was painted by the Russian artist S Tolidze, and is on display at the Laing Art Gallery from December 3rd 2013 to March 2nd 2014, together with other snowy scenes. Looking into the picture’s history has led me to dip my toe into the unfamiliar waters of maritime history, and it’s a fascinating story. 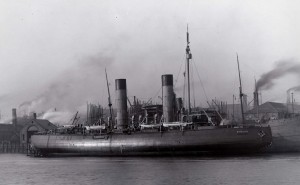 This photograph shows the Ermack moored on the Tyne beside the shipyard at Low Walker. After testing, the Ermack entered Russian service in 1899. The Ermack left the Tyne in early March 1899 (late February by the Russian calendar of the time) with Russian Vice-Admiral Makarov and a shipyard representative on board. The ship spent some months keeping open the Russian port of Kronstadt, which was the main port for St Petersburg. Then, in July, the ship began a 5-week voyage to the Arctic. She returned to the Tyne in August for some modifications. The shipyard representative no doubt brought back the photographs that are now in the Maritime History collection (the records for the Ermack can be viewed on the online Collection Search). 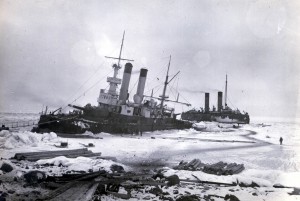 While working off the coast of Russiain1899, the Ermack helped rescue the Russian ship Apraxin, which had become trapped in ice after running aground. 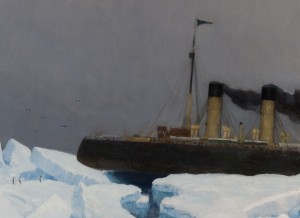 This detail from Tolidze’s painting shows how the ship broke ice by steaming over the edge of the ice-sheet and crushing the ice beneath it. It can’t have been a very comfortable voyage, with the ship constantly crashing down onto ice. The Ermack had a solid steel section along its prow which allowed it to break through ice 2 metres thick. Clearly, the ship had to be enormously strong to withstand the stresses of partly leaving the support of the water as it pushed up onto the ice. The thick black smoke from the ship’s funnels in the picture shows how hard the massive engines needed to work. In the account by Vice-Admiral Makarov, reproduced further down this blog, he describes how the pressure of the ship caused long irregular cracks to appear in the ice to the sides of the ship, which is probably what we can see in the centre of the picture.

The painting is dated 1899, but it seems unlikely that the artist travelled with the ship to the Arctic. He probably painted it in Russia from photographs, perhaps from seeing the actual ship, and descriptions of how the ship had coped with ice while based at Kronstadt/St Petersburg. If the Ermack called in at St Petersburg after its epic Arctic voyage, it could have collected the painting before travelling on to Newcastle. The polar bears are in the picture to establish that it’s an Arctic scene. However, the artist has made a mistake by including penguins (very small, near the prow of the ship). Penguins live in the Antarctic, on the other side of the world from the Arctic – they never mix with polar bears.

Before the painting came to the Laing Art Gallery, it was owned by Walker Mechanics Institute, at Low Walker, where some of the shipyard workers studied in evening classes. The Mechanics Institute was one of many Institutes set up by working men in the 19th century to improve their skills and education. Probably the painting of the Ermack was a gift from the Russian government to the shipyard owners, who gave it to the Mechanics Institute. Sir William Armstrong was a philanthropist and art lover as well as a shipyard owner and industrialist, and probably saw this as an opportunity to support his workers’ efforts to widen their education. The alternative, that the Russian government gave the picture directly to the shipyard workers, seems unlikely in pre-Russian Revolution times. 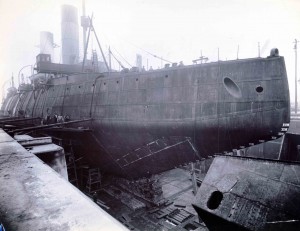 This photo of the Ermack being completed in dry dock shows the long prow, which allowed the ship to ride up onto the ice, crushing it to make a passage. The lower sides of the ship curved inwards steeply and smoothly. This prevented it becoming caught in ice, as the pressure just caused the ship to slide upwards till it rested on the ice. The ship had 48 completely watertight compartments and a double-skin hull braced by incredibly strong steel girders. 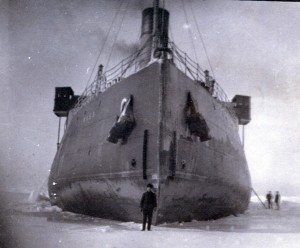 The Ermack is sitting up on the ice in this photo, safe and sound, squeezed up like a pip from a grape. The powerful engines and several propellors allowed it to manoeuvre and break free even when surrounded by ice.

At the first impact [with thick ice] the ship’s speed did not slacken perceptibly, but it was noticeable that the bow began to rise slowly into the air as though she were being lifted from below by a giant hand. The ice showed no sign of yielding, and the ship moved on, going more and more slowly, until perhaps nine feet of the glistening surface usually below the waterline was exposed to view. At length she seemed to stand still. Her engines had not ceased their efforts; the screws were whirling at their highest speed and churning the water at her stern; but progress had decreased until it could hardly, be observed by the eye. She was pressing upon the ice with a weight of 900 tons, and it was still firm. She even slipped back a few inches. It seemed as if she were going to fall. Then, suddenly, a crack which, beginning below the surface, had not before revealed itself, appeared in a long, irregular line extending from the ship’s side. Sharp reports like the barking of quick-firing guns were heard. The whole field trembled as though moved by an earth quake shock. A great strip of it, a mile across, and weighing in the aggregate thousands of tons, detached itself from the principal mass and moved slowly off. After remaining poised motionless for some minutes, the Ermack now darted forward swiftly, like a living thing. Giant ice-boulders, detached by the shock, plunged into the water, while others rising from great depths, sprang into the air, looking as green as emeralds and as clear. They fell back into the water, and were crushed by the flying screws as in the jaws of a monster. Proceeding in this manner, the Ermack made her way through ice-ridges that sometimes rose to a height of eighteen feet above the surface of the water and extended to a depth of nine fathoms below. 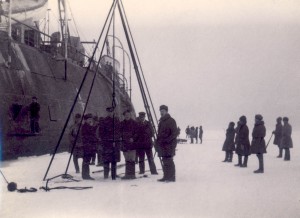 Men from the Ermack on the ice next to the ship. 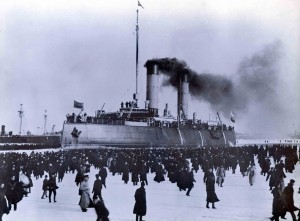 This photo probably shows the Ermack arriving at St Petersburg in 1899, perhaps after her tremendous Arctic voyage. The Ermack had a long career, which included rescuing North Pole explorers in 1938. In 1949, the Russian newspaper Pravda recorded that the ship had been awarded the Order of Lenin in recognition of 50 years of service. It’s amazing to think of a ship being given a medal, but it shows how valuable she had been for keeping ports open for cargo ships and the Russian navy, and rescuing ships that would otherwise have been destroyed by ice. She was finally taken out of service and broken up in 1964 in Murmansk.

Sources used for this blog:

‘The first icebreaker in the world “Yermak”’, Presidential Library, Russia

‘The Icebreaker Yermak’, by Patrick Lockerby

‘The ice-breaker Ermack’, Windsor Magazine in The Mercury, 31 Oct 1900